Universal Pictures marketing machines has cranked “The Mummy” into high gear with last night’s trailer premiere during “The Walking Dead,” and now they’ve just released a great inside look featurette. We reported earlier today on the trailer which you can see here.

Universal wants to create that interconnected Monsters world like Marvel and DC Comics are doing. It’s already moving forward with Johnny Depp’s “The Invisible Man,” and “Frankenstein” with Javier Bardem. “The Mummy” kicks everything off so the studio is betting big, and as you’ll see in the featurette (just below), this is going to be a very big budget with some beautiful sets. You can check out some screenshots below to get an idea of how massive this is going to be.

Director Alex Kurtzman is basically the main brain behind the Universal Monsters Universe with Chris Morgan, and everything is on a very grand scale. Getting Tom Cruise onboard definitely has helped make his image become a reality. Rather than go the green screen route, they are doing it old style with real sets.

I was a little hesitant about this reboot, but after watching the trailer a few times and this featurette, I’m looking forward to seeing the full thing. There are new scenes in this featurette that show the film will be going all the way back to Ancient Egypt before the Mummy became the monster we see in the trailer (below). There’s a great fight with Tom Cruise and Russell Crowe as Dr. Jekyll or maybe Mr. Hyde with the way he’s dragging Cruise around. It’s hard to believe that this is the first time these two have done a film together, but I’m sure with those egos, there’s reason why.

Check out some of the great new images below.

The official synopsis for “The Mummy:”

Tom Cruise headlines a spectacular, all-new cinematic version of the legend that has fascinated cultures all over the world since the dawn of civilization: The Mummy.

Thought safely entombed in a tomb deep beneath the unforgiving desert, an ancient princess (Sofia Boutella of Kingsman: The Secret Service and Star Trek Beyond) whose destiny was unjustly taken from her is awakened in our current day, bringing with her malevolence grown over millennia and terrors that defy human comprehension.

From the sweeping sands of the Middle East through hidden labyrinths under modern-day London, “The Mummy” brings a surprising intensity and balance of wonder and thrills in an imaginative new take that ushers in a new world of gods and monsters. 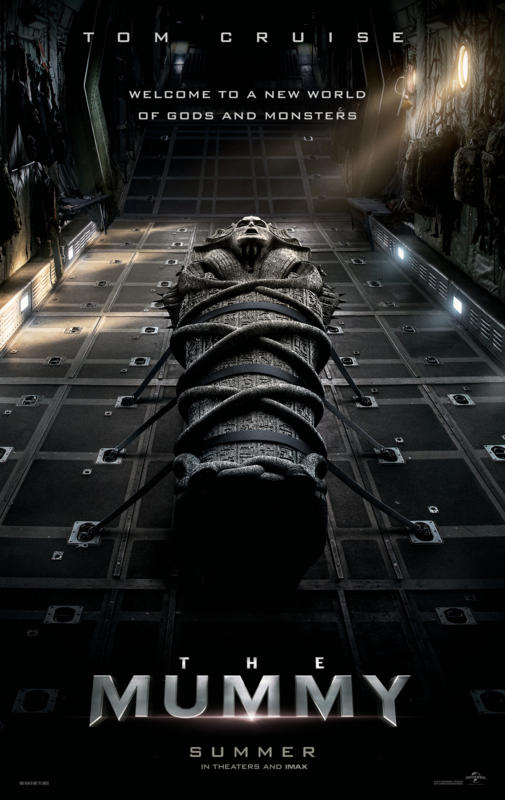 The creative team on this action-adventure event is led by director/producer Alex Kurtzman and producer Chris Morgan, who have been instrumental in growing some of the most successful franchises of the past several years—with Kurtzman writing or producing entries in the “Transformers,” “Star Trek” and “Mission: Impossible” series, and Morgan being the narrative engineer of the “Fast & Furious” saga as it has experienced explosive growth from its third chapter on. Sean Daniel, who produced the most recent “Mummy” trilogy, produces alongside Kurtzman and Morgan.