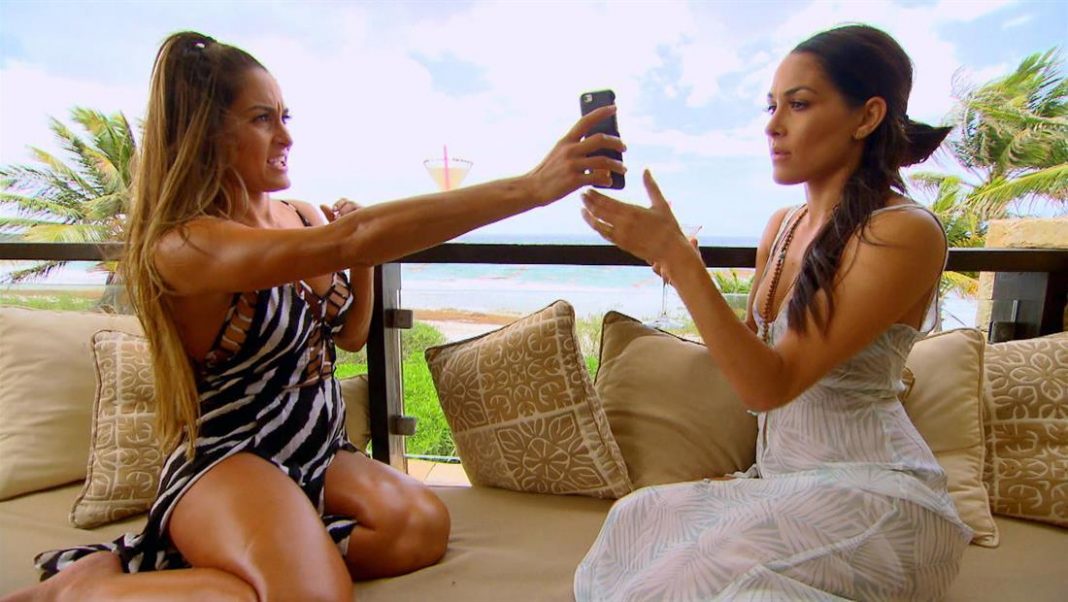 On this week’s episode of “Total Divas,” Nikki took Spanish lessons from a private teacher. Backstage at RAW Natty talked to Cesaro, who was looking for him. Natty said TJ and Cesaro were having a bromance and she was tired of feeling like a third wheel. In Mexico, the Bella twins arrived at a rented mansion with its own private beach and bartender. Nikki talked about her on/off relationship with their dad. Paige and Natty showed up at the mansion to stay with the twins. Naomi and Alicia also came to stay in the mansion. Paige then told everyone she is engaged. Alicia was angry that this was the first she was hearing about it.

Natty said she needed a sexy photo shoot to get TJ interested in her again. Naomi refused to participate because her husband is uncomfortable with her wearing revealing outfits in front of other people. Natty said she wanted the photo shoot to be nothing like TJ has seen before. Paige said Natty was too sensitive about the TJ/Cesaro situation. Brie told Daniel Bryan the twins dad was having a child with another woman.

The girls went out for an engagement dinner for Paige. They went shopping for veils for her wedding but she said it was too much and she just wanted to have fun. Brie said being in Mexico reminded her of their dad. Naomi and Alicia argued because Alicia posted a video on Instagram of Naomi twerking and Naomi knew that would make John angry. The girls then went on a tour when they found out Dusty Rhodes passed away. Natty said they were all close to him and that he was close to TJ. She also said she felt bad for his sons Cody and Dustin because they were close with him. Paige asked Natty if she thought TJ was gay and Natty denied it. She got angry with Paige and told her she crossed a line. Paige got on the phone with TJ and asked him about Cesaro. Brie had Mayan dancers come to the house and entertain them. Paige said it was starting to feel real that she was getting married after being around the other girls, most of whom are married or have boyfriends.