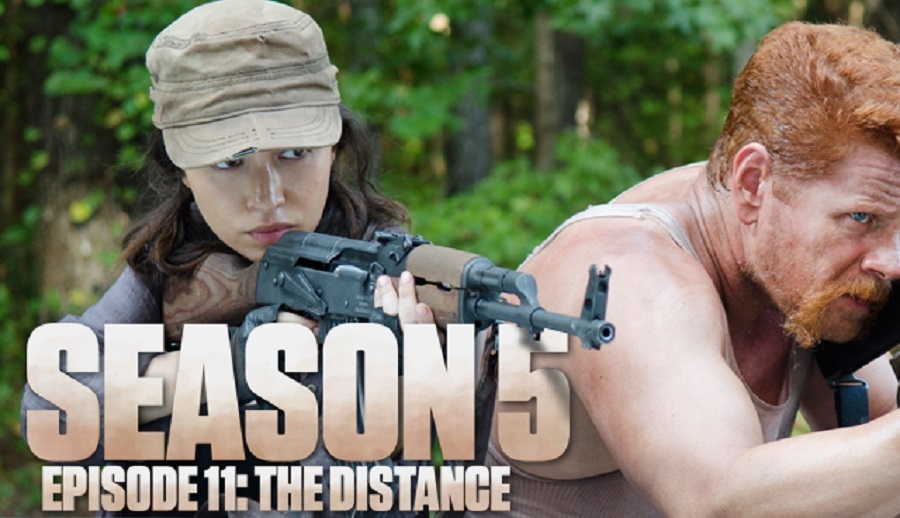 Paranoia and dissension was the theme this week as “The Walking Dead” picked up right off where we left last week. ‘The Distance’ episode had Sasha and Maggie taking the stranger Aaron to their leader. Rick is immediately suspicious as always and errs on the side of caution as any Dark Ages king would do. Aaron makes a good case for himself, telling how he left the water on the road for the group and could have ambushed them if he meant them harm. His spiel makes sense to me, but he sounds an awful lot like a Walmart district manager. He looks and sounds like a corporate shill, using words like “our community.” Rick ends the monologue with a right cross. The grizzled zombie veteran knows how to escalate a situation.

When Aaron wakes from his KO, he compliments Rick on his punching power and keeps talking about how he can be trusted, but understands their unwillingness to do so. He should probably talk less. Rick is a serious man and doesn’t need too much info too quickly. Aaron says he knows Rick’s group is a good one and they are “real people.” Apparently Aaron and his people believe that to be the most important resource in the world. Aaron says his job is to bring back folks that are a fit for his community, but Rick’s isn’t going to just go along with this Johnny-come-lately. There is some dissension in the ranks though as Michonne wants to check out the story. The group needs a real home she says and Rick goes along.

Michonne leads a handful of others to check out Aaron’s story about where his vehicles are stashed. They find an RV and big car just like the man stated, and only have to fend off a couple of walkers. Abraham needs to get to an AA meeting or else he is not long for this world. He was nearly “roamer” meat as he slipped when attacking a walker.

As Rick waits at the barn with his hostage Aaron, Judith is crying and Rick must think she is a squirrel that will actually eat the acorns he attempts to mash up for her. Aaron offers up some applesauce from his backpack and of course Rick isn’t going for that. Aaron makes a good point about it making no sense for him to try and poison a baby at this juncture. Nothing makes sense in this zombie infused world though so that rational doesn’t work with Rick Grimes. He does give in after making Aaron taste the sauce first.

When the scout group makes it back to the barn, they validate what the stranger has been saying. Rick still is so fearful that he doesn’t want to take any risk. I’ve talked about this fact before. Almost every group they encounter ends up being evil. The Hershels of this world are few and far between. Michonne and the others want to seek the new community out though and Rick budges once again. This is against his better judgment, but the group is starting to do some collective thinking instead of doing exactly what the leader wants. It’s a bit early for full blown democracy in this universe. They were dealing with cannibals just a short time ago.

I have no idea if Aaron is part of a sinister group or not, but it’s very suspicious that he won’t tell Rick where this community, Alexandria, is located. I don’t blame Rick for not trusting the route set up for him by this newcomer either. They make a plan to go out at night since Aaron won’t tell them the location. Seeing is believing and words nor pictures can’t convince Rick that the place they are headed to is a safe haven.

Once they all get on the road in the giant car and the RV, Michonne takes a closer look at the photos Aaron had with him. He is bragging about his home there and making it all sound like paradise. The old looking photos could be from an album the guy found for all we know. Michonne, begins to notice that there are no photos of the actual people in the community. That’s nice detective work, but maybe a few hours earlier would have been nice. Aaron explains it away nervously and very weakly. Michonne then goes into their handbook of questions about how many walkers has he killed and how many human lives has he taken. Aaron is on the defensive now, but they are already on the road so it’s a bit late for seeing if he is a liar.

Since Rick took an alternate road from Aaron’s suggestion, it becomes a hot mess with zombies all over the highway, both lanes. The huge car does a good job of running over the creatures, but the windshield is overwhelmed with blood and guts. Some good RainX washer fluid would have helped in this disgusting scenario. The RV is now separated from the lead car, but that’s a good thing as Rick, Michonne, and Glenn have to fight off the zombies left standing. As a side note, if you’re ever in a situation where you have just ran over 42 zombies and there are more coming as you try to clean the windshield, you might want to leave the car running! That’s just a thought, Glenn! That bonehead move should get him expelled from the group. Aaron goes into a major panic when he sees a flare in the sky and inexplicably takes off for the woods. Michonne makes the risky choice to follow the man so the rest go along with her in a dangerous move.

Glenn ended up saving Aaron who was fending off a roamer with kicks since he had his hands tied. These two ended up helping Rick and Michonne as they had a pile of walkers to deal with. And even though Rick caught one zombie with a flare gun shot to the head, that cool looking kill wasn’t helping their cause a whole lot. With all the walkers now doubly dead, Rick and company headed off to where they saw the flare come from that sent Aaron into freak out mode.

Once the entire group is reassembled, Aaron’s buddy is with Daryl and the rest of the gang from the RV. This guy named Eric is more than a buddy. He is Aaron’s significant other so I’m not sure if Twitter exploded over this plot point first or if Fox News melted down initially. Eric has a jacked up foot, but is being taken care of by his new found people. Fans of the comics already knew about Aaron, and what’s great is that the group isn’t making a big deal about them being gay guys. At this point in their world, love is love, and you’re absolutely freaking lucky to have it with someone you would truly die for. Another sidenote: Robert Kirkman had initially suggested that Daryl Dixon might be gay as he wasn’t in the comics and a new character for the show, but once they realized that they would be bringing a major gay character in, he let Carol be the lucky one to have at him…if they ever will.

Rick got a lot of opposition to his lead this week and Glenn did it again when it came to separating Eric and Aaron for the night. Rick is being a bit soft as he turns into “poor decision making Rick” trying to appease his followers. Aaron raised more suspicion from me when he told Noah that they had a wonderful surgeon in Alexandria that may be able to fix his limp. The dude may have some apple trees and all, but next week it’ll become apparent whether or not the community does have a real surgeon with them.

As the RV gets close enough to Washington D.C. to see the landmarks in the distance, and as audiences of the show know, this is the time to sense another improbable wreck. But I was off just a bit as the battery started to give out. They had a spare so it only cost them a little of time. Rick headed off for some quiet time in the woods before they moved forward. By quiet time, he’s still rightly paranoid enough to hide his gat just in case shit popped off inside those impenetrable walls. The people running the community, if there are any others at all, might not be as nice as Aaron who is in charge of marketing the timeshare.

Michonne told Rick that “the fight’s over”, but that is truly jumping the gun. She has no idea what’s in store for them once they leave the road. They’ve been involved with some messed up guys that eat other humans, keep zombie heads in jars, and rape folks inside hospitals. I would reserve some judgment if I were the sword slinging diva.

Rick clearly doesn’t trust what’s happening and neither do I. Just because we hear some children playing from inside the gates of Alexandria does not mean that is reality. The previews for next week were clearly lacking in community members, just like Aaron’s picture show. This place seems too good to be true, but maybe that’s the struggle going forward. Instead of fighting big bads, the group now must learn to trust people again and believe in the most powerful resource left in the world.

Check out the sneak peek for next week’s episode “Remembrance” below: