Home All News THE WALKING DEAD Mid-Season Catch Up 2015 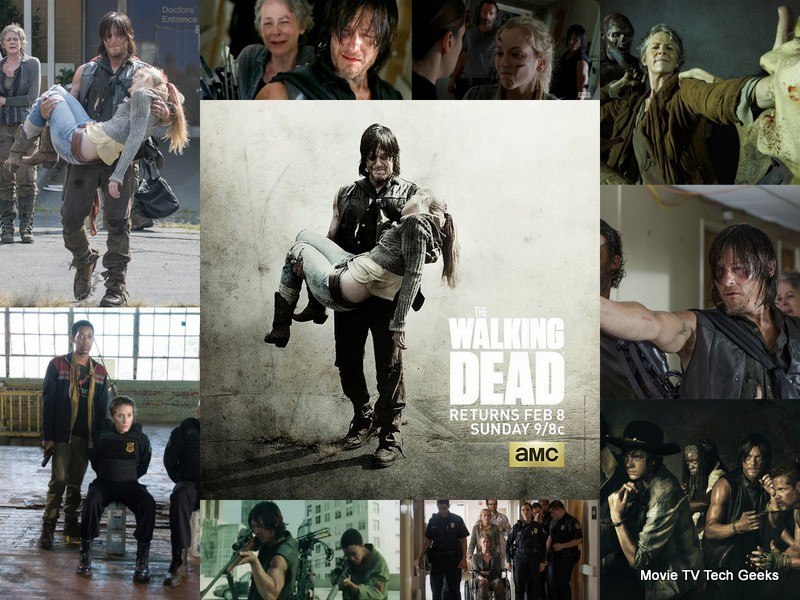 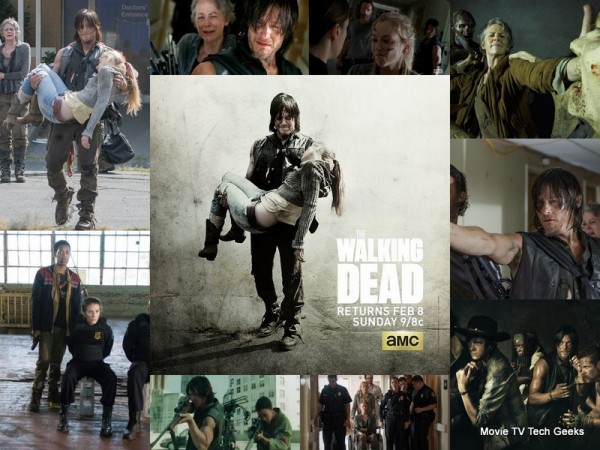 The mid season finale of The Walking Dead wrapped with a truly great episode. The show runners could have left us with a cliff hanger to keep us guessing until tonight, Feb. 8, when the show gets cranking again. But they entered the mid season break with a clean episode that left no open ended story lines. Except one that we got a glimpse of after the credits rolled. I am sure quite a few folks missed the very last scene, thinking the episode had ended.

Below are the first two minutes of tonight’s episode, “What Happened and What’s Going On” to check out. 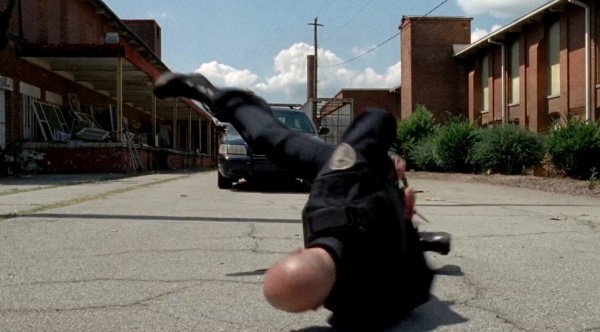 In the opening scene we get to see Sgt. Bob, who rammed Sasha’s head into the window, making his run for it. Unfortunately for Bob, Rick Grimes was in hot pursuit in a much more aggressive manner than even Sheriff Rosco P. Coltrane in his prime. Rick told the man to stop but the cop would have none of it. So Sheriff Grimes gave him a taste of his own medicine when he rammed him with the police car andpossibly broke the Sgt.’s back. The dirty cop tried to have a conversation with Rick, but the baddest man left on the planet wanted nothing to do with it. Rick noted that all he had to do was stop, aka do what I say. Then he ended Sgt. Bob’s life. 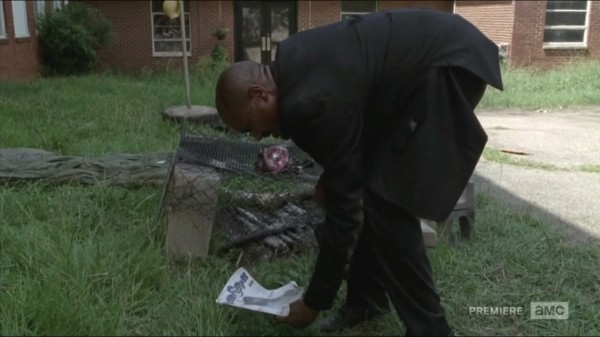 We then got back to the church, where Carl and Michonne are with baby Judith and the preacher man. Carl tries to talk Father Gabriel into taking up a weapon. No point in trying to stay out of the fight any longer is Carl’s argument. Gabriel seems to give into it, only to later be show using his machete to pry up the flooring in his room to escape. He makes a getaway only to end up with a nasty view of reality as he checks out a rotting human leg on a grill. That is almost enough to turn him around and head back to the protected church. The pile of walkers that break through the glass door nearby tip the scales even more and Father Gabriel turns into Rev Run as he hightails it back to the boarded up church. The preacher man put everyone there in big time danger by drawing the group of walkers back with him. He makes it to the front door and Michonne axes the boarded up doorway to let him in. The apocalyptic ninja warrior did all that hacking with baby Judith safely attached to her in a backpack. The backpack was also suitable for the zombie slaughter that happened after the walkers entered the doorway. The group makes it into a separate room to escape through Gabriel’s floor hatch. The coward turned brave as he guarded the door for Carl, Michonne, and Judith to slip out. Gabriel was able to make it out too. The shot of the female walker landing face first on the machete was a great special effect. The creepy part of this scene was the church sacramental message over the archway which read, “He who eats of my flesh has eternal life.” 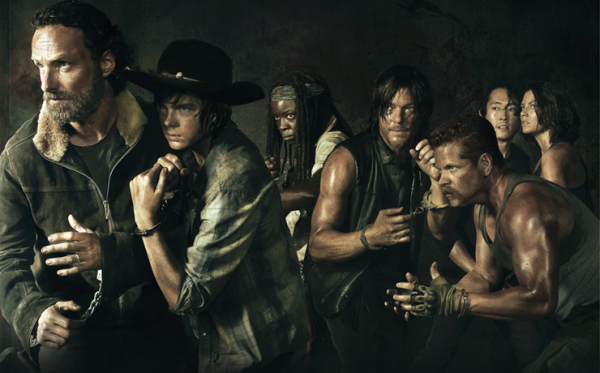 As we get back to Rick’s crew, we see him and Daryl discussing what to do about the fact that they are down from three cops to just two to trade for Beth and Carol. There is a lot of distrust among these dirty cops. That tends to happen with rape and other misdeeds. The two remaining police officers say they will go along with saying that Sgt. Bob was killed by a group of rotters. 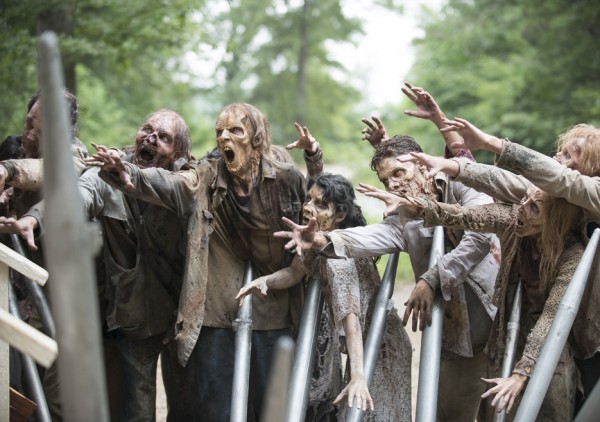 After Abraham gets his mental game back, he comes rolling in the firetruck to stop the church from leaking zombies all over Carl and Michonne’s team. It is good to see Big Red back to being helpful and over his depression from last episode. 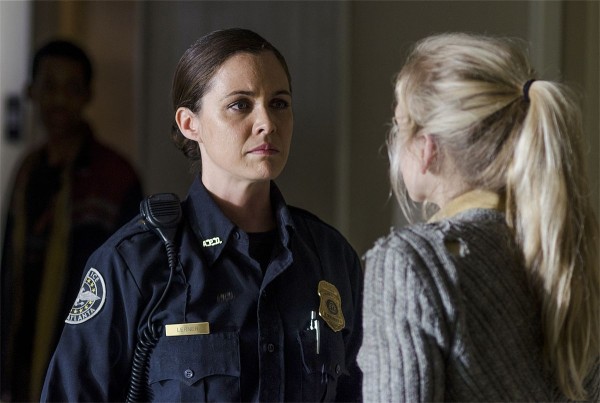 There is more talk between Beth and Dawn as Beth is labeled a cop killer. That is a strange term used in this world. It doesn’t hold quite the weight it does in a civilized world. Officer O’Donnell sneaks up on the two and hears what’s been going on. He makes a couple of threats and it is apparent to me that he is not long for this world. I would have bet 20 to one on Dawn in this showdown. O’Donnell appeared to me more likely to have been holding his wife’s purse in public than solving any crimes pre-apocalypse. As expected, Dawn gets the upper hand on the weakling cop in a nasty fight, but Beth finishes the guy off with a shove down the elevator shaft. 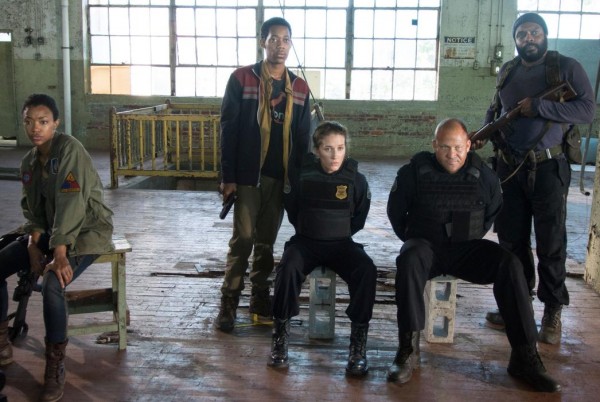 The episode gets to the meat of things when Rick is shown drawing out the police to let them know of the swap proposal. Hostage swaps always get messy in film so I was worried about this plan all along. Rick lets the two police officers know that his crew is “close” when they inquire. The sniper shot on a nearby walker let them know just how dangerous this man was who stood before them.

Once the swap is set up, Beth preps for the worst with a scissor shank up the sleeve of her cast. The trade off of two cops for Beth and Carol starts off well enough. I thought there might even be no conflict at this particular point. However, Dawn just couldn’t let it go peaceably. She decided that she needed Noah back, as if he belonged to her somehow. Rick protested and looked like he might bite her throat out, but Noah offered himself up to stop any violence. That’s when Beth decided to end the rule of Dawn with her shank. It was a good move too. I even believed she caught Dawn off guard, as she planted the scissors into the cop’s neck area. However, Dawn was ready enough to quickly blow the back of Beth’s head clean off. A nasty scene indeed. The cute blond’s cranium exploded in brains and blood. This led to Daryl going temporarily insane and blowing Dawn’s brains out. By some miracle, there is not a full blown shootout in the hallway. The remaining police force seemed relieved that Dawn’s brains were splattered everywhere. And Rick’s team of killers held their rage in check. 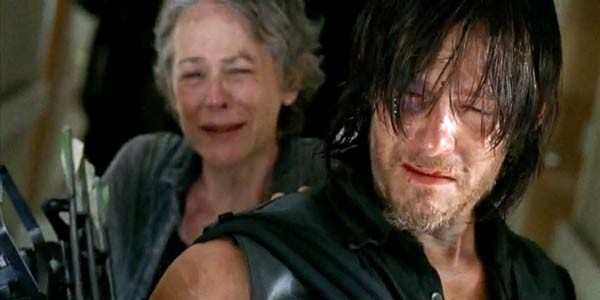 As Abraham’s crew joined with Michonne and Carl make their way to the hospital, we witness the exit of Rick’s team along with Noah. Daryl carries the lifeless body of Beth. As Maggie sees her departed sister we got the most emotional scene ever in The Walking Dead series. Maggie’s scream as she falls helpless to the ground, combined with tough guy Daryl’s sorrow, brought out the waterworks for many Walking Dead fans. It was the prefect ending to the mid-season finale. 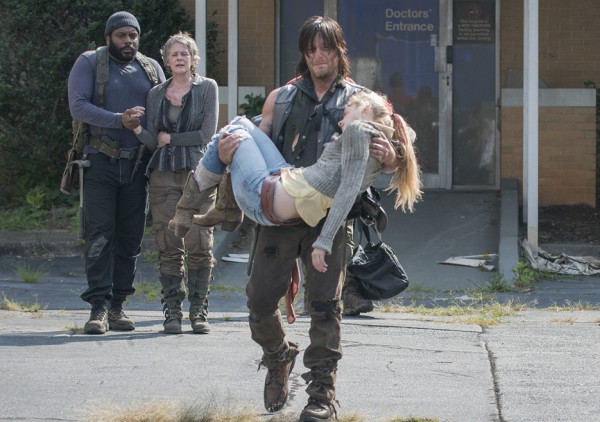 After the credits did roll, we did get one tiny cliffhanger. Our old friend Morgan is still tracking Rick’s group. He enters the church and eventually finds a map that has a reference to Rick Grimes written on it. This scene is supposed to get viewers coming back with excitement tonight, and it but it was unnecessary. The hospital exit scene with Daryl carrying Beth was the right place to drop the mic.