Home Sports Football The End of Violence in Football 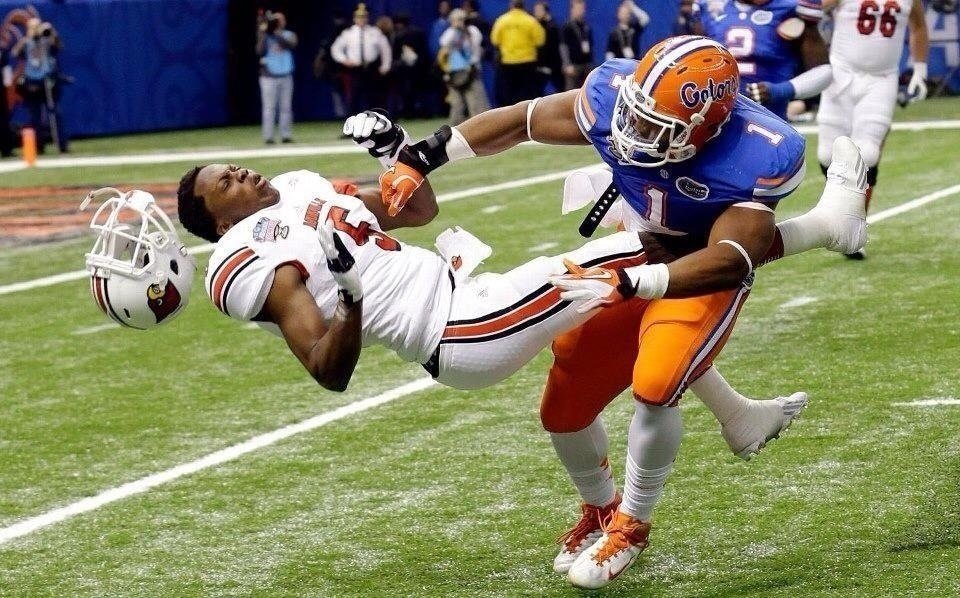 Just when will the violence in football end? Never, and I’m talking on the field as well as off. The recent conviction of wannabe and “actually be” thug, Aaron Hernandez showed the world just what football players are capable of doing when they get off track. Hernandez is an especially bad example of a football player, having been found guilty of murder and facing another trial for two additional homicides. Not every NFL or college team has this type of person on the roster thankfully. But to think football is not littered with guys who are perfectly comfortable being around violence is naive.

I hate violence. Most normal people do as well. I love football however, so I must enjoy violence on some basic level. Many so called experts say that football is the most popular U.S. sport because it is so violent. That is only partially true though. I love big hits, but I have always celebrated big plays more than a guy getting jacked up into unconsciousness. Seeing Russell Wilson twist the dagger in the heart of Green Bay in overtime last year was much more satisfying than seeing a linebacker rip Aaron Rodgers‘ leg off his hip.

I don’t want to persecute the sport I enjoy above all others too much. After all, there are murderers who have worked on Wall Street, rapists who used to be accountants, and doctors who have abused their wives. People are people and sometime they get sideways, have a bad day and do something awful like assault and battery. And some everyday people are just plain bad and commit violent behavior on a regular basis. I have to imagine that workplaces that have some connection to violence are more apt to have workers that commit violent acts. Football is a violent workplace. If you don’t think so, just listen to any practice with the coach verbally abusing the players or having the team attack each other in bull-in-the-ring drills. And that’s just practice! The games are the real deal as rivals are amped up to hit someone besides their teammates they have been sweating with for weeks during training camp.

What can coaches and other leaders in the NFL and college do to weed out insanely violent people like Aaron Hernandez and Rae Carruth? These guys can’t do it themselves. They are too close to the players and they need to win ball games. Winning is and should be their main focus. Don’t win and they are no longer coaching. What they could do is have mental evaluations on every player or monthly counseling sessions to try and find a smaller problem before it explodes into a larger one. Perhaps some time on a psychologist’s couch early on in college would have kept Aaron Hernandez from killing multiple people, allegedly, after becoming a multimillionaire.

Is the onus on fans to turn away from the violence of football? I hope no one is depending on that happening. Football is not going anywhere anytime soon. Fans will keep watching no matter what. You can just check out how many Ray Rice jerseys were worn by female Ravens fans even after his punch went viral. No moral person wants to see murderers like Hernandez commit these heinous acts. Murder is a step too far for most fans. Domestic abuse is frowned upon as well, unless you can get 15 sacks a year. Just ask Cowboys fans who will be lined up to buy Greg Hardy jerseys if he gets off to a good start once he is eligible to play on Thanksgiving.

I will admit it’s easy to get caught up in the hype and glory of the game of football. Humans crashing into each other play after play and game after game can get lost in the mix of touchdown celebrations and heroic comebacks. Fans need a reminder that this game is not all fun, and well, games. People get hurt often and the long term effects are undeniable. And that is just the on field action. The junk that happens off the field as a result of the connection to constant violent aggression can’t be overlooked. Fans are appalled when a guy breaks a leg in a game or they hear about Rae Carruth murdering his pregnant girlfriend. What were they expecting, rainbows and unicorn drawings? Why do people watch NASCAR races other than to cure insomnia? Surely they don’t enjoy four hours of cars driving in circles. It’s the possibility of big wrecks of course.

In many ways football is the perfect sport. The team concept is on display on every play. There is the on field leader in the form of a QB working in tandem with the sideline general in the form of the head coach. There are athletic players with blazing speed who can wreck even the perfectly planned play. Football is simply awesome. But if a person dreamed up a perfect world, this game could not be part of that. Violence is one of the worst traits of mankind. Without that same trait, there is no football.

Of course football isn’t the only sport that has issues with violence off the field of play. Sprinters sometimes shoot their beautiful girlfriends through bathroom doors, NBA players have been known to try to strangle their coach, and even NASCAR guys have been accused of domestic abuse. Boxing is notorious for having their athletes involved in super violent acts. It is the nature of sport. Their guys are used to hitting others and getting hit. It is second nature, just like in football.

Can the leaders in the world of football do better? Absolutely. There are programs that can be instituted to help players deal with issues in nonviolent ways. Coaches, who many players look to as mentors, can make time for preaching the benefits of walking away from violent situations. A few minutes a week shouldn’t cut into the game planning too much. Even out-of-the-box solutions like having players in martial arts programs would be helpful for them to learn the benefits of self-defense while being taught how to respect their fellow human travelers.

There will always be random situations with guys like Aaron Hernandez. Some guys like the thug life and will be right at home in prison. You can’t prevent every act of violence, either in the world of football or outside it. There can be efforts made to improve the overall image of the game though. Steps have been slowly taken to tone down the super violent hits, although that took a billion-dollar lawsuit. Also, domestic abuse is finally under the microscope after 2014 was wrought with those cases in the NFL. Football may be slowly moving in a better direction, but don’t expect giant leaps to a gentle nonviolent pigskin future. The only future with nonviolent football would be one with no football whatsoever.