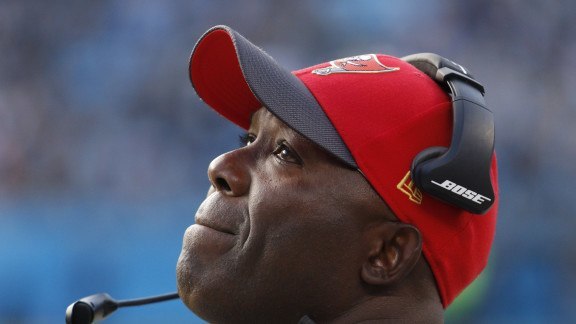 In easily the most surprising coaching move of the offseason, the Tampa Bay Buccaneers have decided to part ways with head coach Lovie Smith two years into his four-year deal. Smith finishes his tenure in Tampa with an 8-24 overall record after a 6-10 campaign in 2015—a respectable turnaround with rookie Jameis Winston at quarterback.

Lovie’s payout will be about $10 million, so I’m not going to cry for him, and the Bucs were 11-21 in the two years prior to his hiring, so I’m not going to say that he has necessarily met expectations thus far in Tampa. Still, the Bucs will be hard pressed to find a coach who can turn this team around in two seasons.

“This is stupid,” said All-Pro Bucs linebacker Lavonte David in a Tweet which was later deleted. “We can’t even have a consistent coach, 3 coaches in 5 yrs.”

David has a point. Nowadays, NFL teams seem to throw away coaches faster than they can hire them. One or two seasons isn’t enough to turn a franchise around, especially one that has been down on its luck for the past few years. In some case, such as the San Francisco 49ers situation with Jim Tomsula, an early release is acceptable; but I have a hard time believing that a well-established head coach like Lovie Smith “duped” the Buccaneers organization in any way.

Instead, some organizations seem to be looking for an instant elixir—a 2006 Sean Payton-esque one-year plus-seven win total. Those are few and far between, my friends. Hell, it took Smith three seasons to lead the Chicago Bears to Super Bowl XLI after taking over in 2004, and that team had a lot more talent than the 2014 Buccaneers.

In my opinion, Lovie Smith is a fantastic defensive coach, but he’s been struggling as a head coach with only one postseason appearance since that Super Bowl loss. It might be time for him to take a step back into a defensive coordinator role. Since the big game, Lovie has an overall record of 60-68, so don’t be surprised if he isn’t mentioned as a candidate for the other teams seeking a new leader this offseason.

Maybe he can give the whole head coaching thing another shot in a few years.