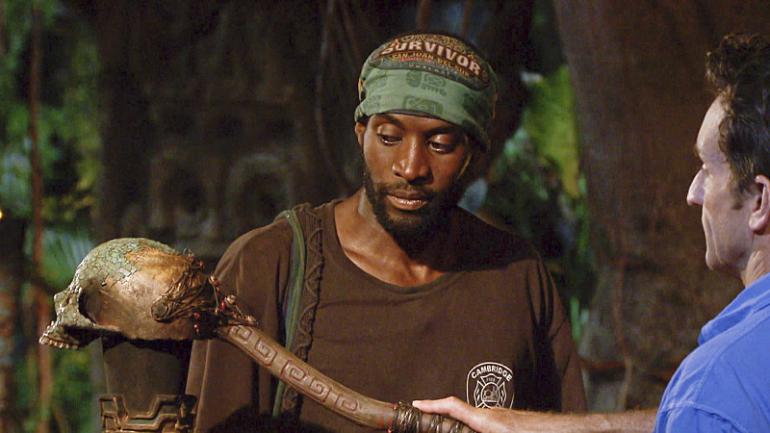 On this week’s Survivor the castaways discussed their alliances with their teammates. Jon stated that if there was anything he had learned from watching past seasons of Survivor it is that he needs to trust his instincts during the competition.

For this week’s reward challenge the castaways divided into two teams to pit individuals against each other on a beam placed above a puddle of mud. As each pair went head to head the goal was to knock the other person off the beam and into the mud. The winners of this challenge get to ride on a fishing boat with food and drink, including alcoholic beverages for the adults. Baylor and Missy were the last two to compete in this challenge and Baylor managed to toss her mother off the beam. In a massive trade Natalie and Jeremy, two of the castaways on the winning team, gave their positions on the team to Jon and Jaclyn.

When Jeff asked Natalie why she gave away her position she said it was to pay Jon back for helping her out by siding with her and her allies at the last tribal council and that trading with Jon would give her leverage to use later on in the competition. Jeremey was then chosen to go to Exile Island. Baylor said that he was chosen to go there because their team needed an immunity idol in order to save one of them from elimination. Jeremy said he appreciated Jaclyn and Jon joining his alliance.  On Exile Island he announced that he was looking for the immunity idol in order to protect himself. While attempting to survive a night at Exile Island, Jeremy stated that he was unhappy because he had no shelter, making sleep difficult.

He expressed his displeasure at sleeping on rocks and sleeping next to the fire he made for light. As a result, he was awake most of the night and felt lethargic in the morning. He also said he felt like he had been hit by a train. After an entire day of searching for the immunity idol Jeremy was becoming frustrated that he couldn’t find it and speculated that the reason he couldn’t find it is that Jon had already taken it.

Back at camp Jon speculated that Jeremy would figure out that he couldn’t find the immunity idol because Jon already had it and that Jon was hoping this would make Jeremy look stupid.

The winning team of the reward challenge then headed to the beach to be picked up by their boat. Once they were on the boat they enjoyed the trip and even got to see some dolphins. They also sipped on champagne while on the boat and Jaclyn and Jon expressed their love for each other.

Upon Jeremy’s return from Exile Island Jeff told him he looked beat up and Jeremy told Jeff that his two nights on the island were very rough. He spoke about the crabs scaring him, which made him look weak in the eyes of the other castaways. After Jeff took the immunity necklace back from Jeremy he explained this week’s immunity challenge. The challenge was to unspool a rope which would drop blocks onto a large disc.

The blocks then have to be put together like a puzzle. Since on this own this sounds too easy they added a twist to the challenge by dictating that the only body part the castaways could use were their feet. They were challenged with unspooling the rope, putting the blocks together to form a puzzle and placing a flag on top of the finished product, all with only their feet as their tool. Baylor won individual immunity from this challenge. Jeff then dismissed the castaways back to camp until the tribal council later in the day.

After they were dismissed Jeremy stated that even though he was upset he didn’t win individual immunity he was happy that one of his allies did. When they got back to camp Reed stated that he was disappointed he didn’t win immunity. He felt that the challenge was custom made for him and since he lost the challenge his chances of still being able to compete after the next tribal council were not good. Reed then went through Keith’s bag when Keith wasn’t looking. He found a piece of paper with directions stating what should be done with the hidden immunity idol.

Reed commented that this was a rookie mistake and Keith never should have left this piece of paper in his bag. He even stated that though he normally hates when someone looks through someone else’s personal belongings he was desperate enough to do it anyway. Reed then told Baylor and Missy about finding the piece of paper. He even showed the paper to Baylor and Missy. This helped them deduce that Keith had possession of the hidden immunity idol. Baylor stated she never thought Keith would be the one who would find it. She also speculated as to how long he had the paper and had been hiding it.

At tribal council, Josh was brought in as the first member of this season’s jury. Jeremy stated that the trust within an alliance is an important part of the game and that even though the teams are currently four against six the team of six doesn’t necessarily have an advantage over the team of four and vice versa. Jaclyn stated that giving up her position on the winning team for the reward challenge was a positive thing. Jeff then tallied up the votes and announced that this week Jeremy is going home, much to the shock of many viewers.