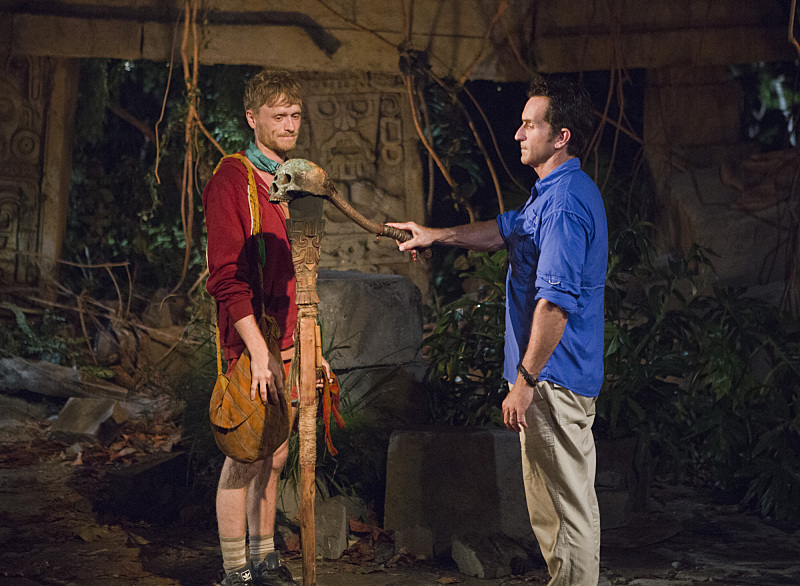 On this week’s Survivor the castaways were disgruntled because Julie unexpectedly quitting the show last week left them without a tribal council that night. This screwed up the strategies of several of the 11 remaining contestants and they expressed their displeasure over it. They are itching to vote Josh out and not pleased that they missed their chance to do that last week. Though Jaclyn had flipped her decision and started to focus on getting Jeremy booted, Jeremy has no idea that is the plan.

The challenge the castaways faced this week required them to divide into two teams and tackle the movement of large and heavy puzzle pieces which they had to use to build a temple. When the temple was completely built one person had to run up the temple faster than their opponent from the other team. Once at the top of the temple they were required to unlock the statue that sat atop it. At that point the goal was to be the first team to raise the statue as you would raise a flag. The team that raised their flag first got the reward they were competing for. The prize for winning this challenge was a fully stocked taco bar, featuring steak, pork and chicken not to mention tea, beer and margaritas. At the mere mention of this prize each castaway was excited and motivated to help their team win the challenge.

After they were divided into two separate teams the challenge began. Much to Missy’s chagrin she had to sit on a bench and watch the challenge without being able to take part in it because neither team picked her. During the challenge Jeff announced that the reward for this one was the biggest reward they have given so far in this season of Survivor. Upon declaring the winning team, Jeff instructed them to choose one person to send to Exile Island before they could get their reward. They chose to send Jon to the island because “he’s a big guy.” Jeff then told Jon it was a complement that he was the one chosen. After giving him a map of his destination, Jeff sent Jon on his way. The castaways were then informed that Jon would be back before the next immunity challenge took place.

During their taco feast the team talked more about Julie having quit the competition and discussed their opponents. Meanwhile back at camp the losing team ate snails and talked about their own strategy. Josh asked Baylor to not vote him out because he had stuck his neck out for her more than once during this competition. Baylor said that that was an awkward moment for her. She felt like in some way Josh was blackmailing her, which could easily backfire on him sooner or later (though probably sooner.)

She also mentioned that it is unsettling for someone from a Christian family to try and blackmail anyone. Her take on it was that when someone gives someone else a gift they shouldn’t do so expecting something in return and she was surprised that Josh did exactly that. Unfortunately for Josh, Baylor didn’t feel she owed Josh anything, including a promise to not vote him out at the next tribal council. She talked about people saying that Josh has been using other people during this competition. Josh reacted by stating that he thought Missy, Baylor’s mother, was trying to control her decisions about the game.

When Jon arrived at Exile Island he remarked that the island was desolate and that he wasn’t happy to be there by himself. He did state that while he was there it was a good time for Jaclyn to develop relationships with the other castaways so that people would stop looking at her as someone who just tags along with others. Jon then opened the clue left on the island for him. The clue was to lead him to a new immunity idol for the game. After much searching he came across the coveted idol.

Back at camp Baylor complained that Alec treated her like she was his little sister and tried to make her a “slave” by asking her to throw some trash in the water. When Baylor was asked to go help collect wood she made a sound of disgust and was then berated for doing nothing but lying around all day. The “girls” were told to keep the firing going while the men went off to collect the wood that Baylor wouldn’t collect herself.

Jon then returned from Exile Island and this week’s Immunity Challenge was explained. The challenge involved showing the castaways several symbols and they had to use a cube with each symbol represented. This cube was used to show Jeff the symbols the castaways were shown. Jon was the first one to lose this challenge, with Natalie being eliminated next. Baylor was the third one out, leaving five competitors. Jaclyn was the next one eliminated. Keith and Missy were then eliminated, leaving it to Jeremy and Josh as the last two competitors in the Immunity Challenge. Ultimately Jeremy was the one that won immunity for the week.

Jeremy stated he hoped he could get Jon and Jaclyn on his side so he would continue to be safe from elimination. Jaclyn told Jon that she no longer liked any of the male castaways and they must concentrate on getting them voted off. She complained to Jon that they ignore her when he is not around. She then voiced her displeasure that when it came to strategy Jon was thinking long term and that that was a bad idea.

Most were in agreement that Baylor needed to be the one voted off because she does nothing to contribute. At Tribal Council Jaclyn shared that she felt like there was a general lack of respect from the others toward her. Though everyone expected Baylor to be voted out, Josh was the unlucky castaway who got the seventh boot.