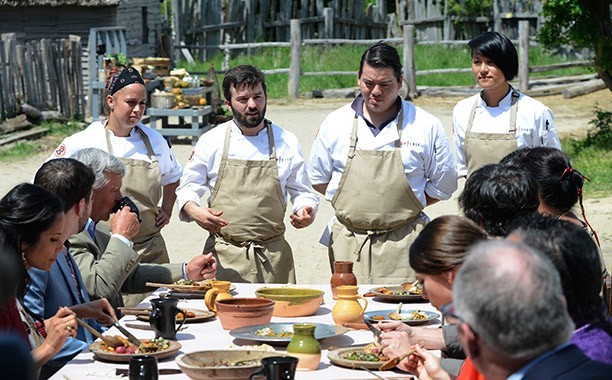 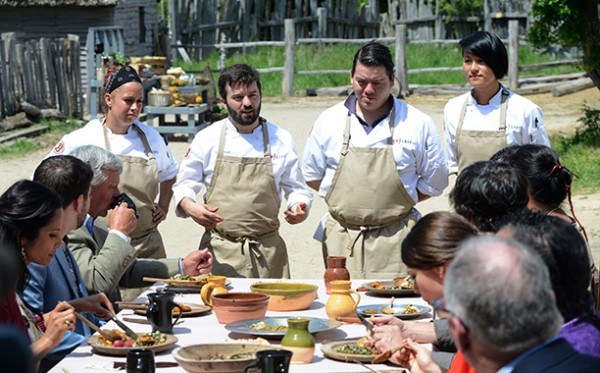 This week’s episode of Top Chef began with the chefs walking into their temporary home and making a toast to the nation’s fallen heroes. Melissa read letters that her girlfriend sent her so that she would have something encouraging to read every day during the competition.

Tiffany Faison showed up at the chefs’ apartment and announced that they were being taken to the site of a bog where they would begin this leg of the competition. Their challenge was to harvest the cranberries faster than their opponents. The top four that collected more cranberries than any of the other chefs were given a leg up during the quick fire challenge. Padma then announced that each chef had to create a dish using cranberries. The top four winners of the cranberry collecting were given access to better quality ingredients to make their dishes from.

Adam ran into a problem with his dish when the sauce he was making caught on fire on the stove. When Padma tried Adam’s dish she said she wished it had more sauce on it. Katsuji made steak tartar and used cranberries in his marinade. Stacy created a cranberry relish for her stew. Tiffany announced that Katsuji’s dish was an odd choice and that Stacy’s soup wasn’t seasoned enough. Doug was praised for his dish and the cranberries were declared to be perfect. Tiffany then chose Katie to win the quick fire challenge, giving her immunity in this week’s Elimination Challenge.

The Elimination Challenge was related to the first Thanksgiving. The chefs were told they had to work together at a plantation to cook a meal as it would have been cooked in the 1600s. The only ingredients they could use were ingredients brought over on the Mayflower. Colonists that had been on the Mayflower were serving as taste testers for the Elimination Challenge.

The chefs then discussed what each of their families normally does for Thanksgiving. Stacy said she felt like she was alone and that she missed her boyfriend, who is serving in the military at an overseas base. After she spoke to her boyfriend on the phone she said it had helped her morale for the rest of the competition.

The chefs arrived at the plantation to begin their challenge and saw the spread of ingredients at their disposal, which included rabbit, lobsters and various other types of fish. Cast iron pots and fire pits were what the chefs were tasked with using to create the meal. Gregory tackled the goose as his part of the challenge. Stacy was tasked with baking clams for the team.

Tom Collicchio showed up at the plantation to supervise the chefs. He visited each individual chef as they worked on their dishes. Then Tom, Gail, Padma and colonists and tribe members sat down to dine on the dishes prepared by the chefs. Doug presented his spit-roasted rabbit to everyone. One mentioned that she liked the prepared lobster even though it isn’t something she would normally enjoy. Tom praised each of the four chefs who prepared the first round of dishes and told them they all did a good job.

The second four chefs to prepare dishes presented succotash with goat milk, blueberry stuffing with sautéed lobster, duck fat roasted cabbage soaked in vinaigrette, roasted goose and seared venison. Once again the judges and guests praised the dishes the chefs prepared. They did complain that Melissa’s dish didn’t have as much flavor as they would like and that Gregory’s dish was too dry. The flavor of Stacy’s stuffing did not please the judges either.

When all of the chefs went in front of Tom, Gail and Padma, Doug, Katsuji and Mei were the ones with the judges’ favorite dishes. Of the three of them Katsuji was chosen as the winner of the Elimination Challenge. Stacy, Gregory and Melissa were the three that had the worst dishes in the minds of the judges, meaning one of them had to be worried about being sent home. The one that ended up getting sent home was Stacy, the hometown contestant in this season’s competition. Upon losing she said that the pressure of being from Boston was keeping her awake at night and that she hadn’t wanted to let her hometown down. She also said despite losing the competition she is proud of who she is.

The interesting part about this week’s show was that the chefs didn’t have to worry about heading to the nearest Whole Foods and buying the ingredients they would need to prepare their dishes. In this respect, the chefs got a break this week because they weren’t limited to what they would buy at the grocery store.

Having to cook on a plantation as people did in the 1600s added an interesting twist to the show that put the pressure on the chefs. Clearly some of them handled the pressure better than others. With a limited amount of space and resources they had to work together to prepare the Thanksgiving meal they were tasked with serving.

Since this week’s episode had a Thanksgiving theme to it there was no drama between the chefs. As a result the show seemed to flow much more smoothly than it would have otherwise. It seems as if the producers are finally realizing that the way to get high ratings is to focus on the competition itself and not try to turn Top Chef into a glorified Big Brother.

For Boston viewers it is quite possible that this week’s episode might have left a bad taste in their mouth as Stacy was voted off unceremoniously. However it was obvious by watching her compete that every week she was becoming increasingly uncomfortable.

Next week’s episode of Top Chef contains what many viewers feel is the highlight of each season; restaurant wars. For new viewers to the show restaurant wars is where the remaining eight chefs are divided into two teams and both teams have to run a mock restaurant.