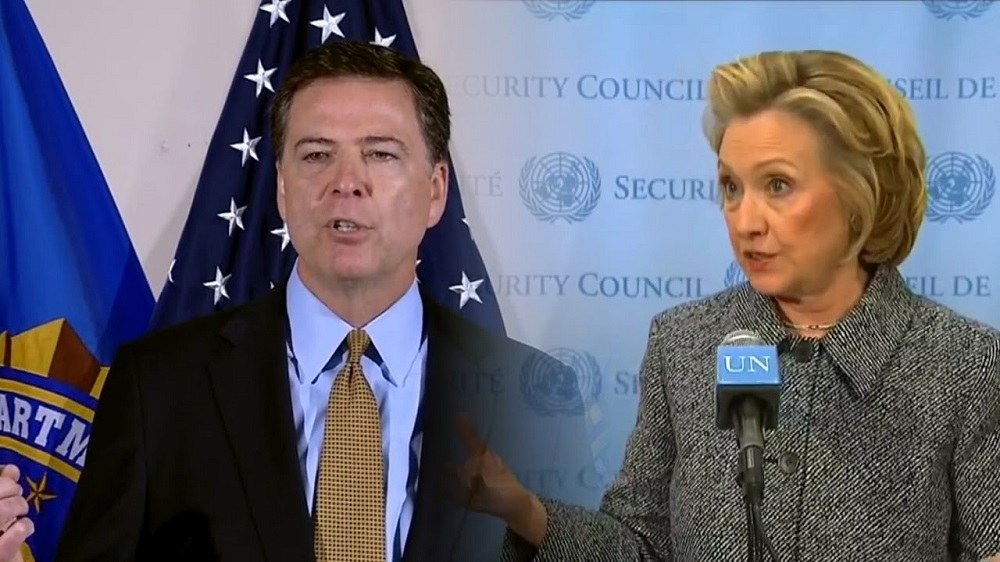 In a case of too little, too late, FBI Director James Comey announced on Sunday that the latest probe into Hillary Clinton‘s emails had led to nothing found. So, once again, the FBI is saying case closed, but that’s no reassurance that they could pull this again if Clinton is elected right before the inauguration.

As this was unprecedented for the FBI, which came under fire from everyone except Donald Trump‘s camp, you can be sure the Clinton camp will be standing on guard for another stunt like this.

FBI Director James Comey abruptly announced Sunday that Hillary Clinton should not face criminal charges related to newly discovered emails from her tenure at the State Department, lifting a cloud of uncertainty that has shadowed the final days of her presidential campaign.

In a letter to congressional lawmakers two days before Election Day, Comey said the FBI has worked “around the clock to process and review a large number of emails” obtained from a device belonging to Anthony Weiner, the disgraced former congressman and estranged husband of top Clinton aide Huma Abedin.

Comey said the review has not changed the bureau’s assessment from earlier this year that Clinton should not be prosecuted for her handling of classified information at the State Department. 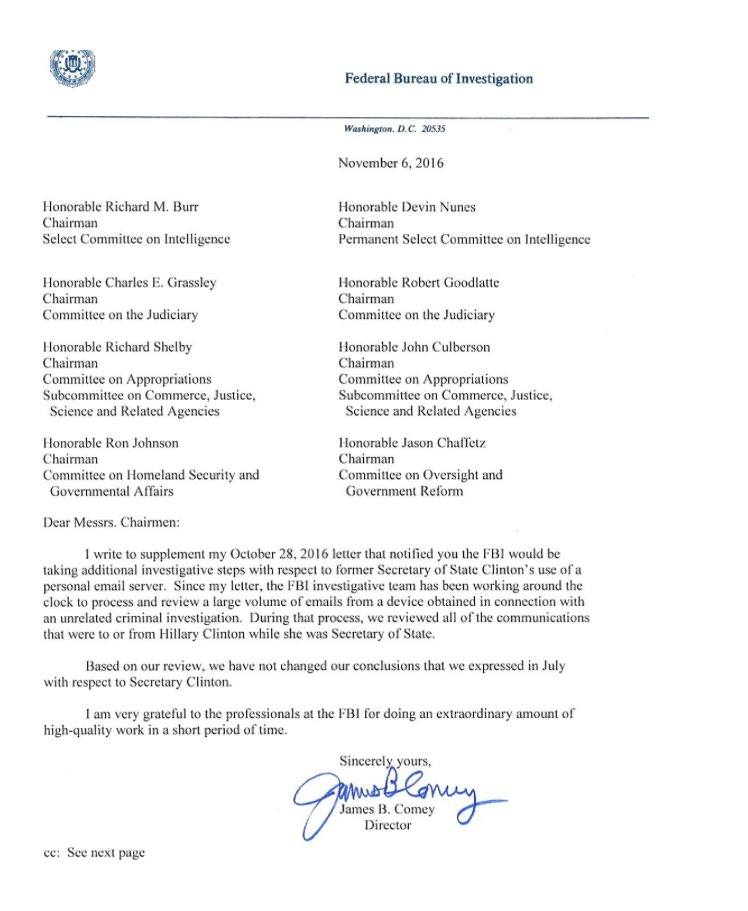 Clinton was infuriated by Comey’s decision to alert Congress late last month that the FBI was reviewing new materials, calling it “unprecedented” and “deeply troubling.” The decision shattered what had appeared to be Clinton’s solid grip on the race and emboldened Republican Donald Trump.

Trump landed in Minnesota for a rally moments after Comey’s announcement. He made no direct mention of the FBI decision and continued to insist -without evidence – that Clinton would be under investigation during her potential presidency.

“She’s protected by a rigged system,” he said. “She shouldn’t even be allowed to run for president.”

The FBI began investigating the handling of classified material on Clinton’s private server in New York shortly after she announced her bid in April 2015. Last July, in an extraordinary public statement on an ongoing case, Comey announced he was not recommending criminal charges against Clinton and called the decision “not even a close call.”

But he also delivered blistering criticism of Clinton, calling her and her team “extremely careless” with her handling of national secrets.

Clinton had appeared to be heading for a sweeping victory before the FBI review, but Comey’s announcement blunted her momentum. Since then, national polls and battleground states have tightened, though Clinton still appears to hold an edge over Trump in the campaign’s last moments.

During remarks at a black church Sunday morning, Clinton urged voters to choose “unity over division” as she sought to close a caustic presidential campaign on an uplifting note. She warned that President Barack Obama‘s legacy is on the line, part of her strategy to shore up black voters who may be less enthusiastic about her than the president.

“If we come together with the common vision, common faith, we will find common ground,” Clinton declared.

Clinton also planned to campaign alongside basketball superstar LeBron James in his home state of Ohio and appear in New Hampshire with Khizr Khan, the Gold Star father who delivered a stinging indictment of Trump at the Democratic convention.

Her high-wattage allies also fanned out across the country, including President Barack Obama, who was joined by musician Stevie Wonder at a rally in Florida.

As the campaign’s final weekend drew to a close, more than 41 million Americans had already cast their ballots in early voting.

Trump opened a furious day of campaigning in Iowa, the battleground states where he appears in the strongest position. He also planned to make stops in Minnesota, Michigan and Pennsylvania, three states that have reliably voted for Democrats in presidential elections, as well as Virginia, a state Clinton’s campaign believes it has a solid hold on.

The businessman was also facing criticism for a new ad that asserts the “establishment has trillions of dollars at stake in this election” and features photos of billionaire George Soros, Federal Reserve Chair Janet Yellen and Goldman Sachs chief executive Lloyd Blankfein, all of whom are Jewish.

The National Jewish Democratic Council said the ad’s use of anti-Semitic stereotypes is “shocking and dangerous.” 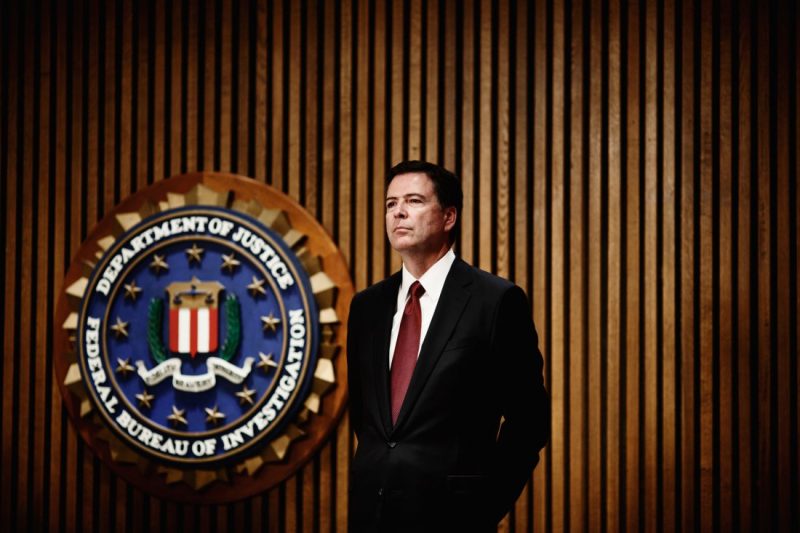 FBI Director James Comey told Congress on Sunday that a review of newly discovered Hillary Clinton’s emails has “not changed our conclusions” from earlier this year that she should not face charges.

In July, the FBI chief chastised Clinton for her use of a private mail server while serving as secretary of state, but he said the bureau would not recommend criminal charges against the Democratic presidential nominee. The Justice Department accepted that recommendation.

The new letter follows one Comey sent late last month, in which he said agents would review newly discovered emails that may be connected to Clinton. They were found on the computer of Anthony Weiner, the disgraced congressman and estranged husband of Clinton aide Huma Abedin.

That disclosure, made over the objections of the Justice Department, roiled the presidential race in its final days and revived an issue that Clinton had put behind her months ago.

Comey wrote Sunday that FBI investigators had finished reviewing all newly discovered emails that Clinton sent or received as secretary of state.

“Based on our review, we have not changed our conclusions that we expressed in July with respect to Secretary Clinton,” Comey wrote to congressional leaders.

Comey’s letter appeared designed to resolve any lingering ambiguity about the prospect that Clinton might face criminal charges, though it still left many questions unresolved – including the number of emails, their content, how the messages wound up on Weiner’s computer and what, if anything, the announcement means for Abedin.