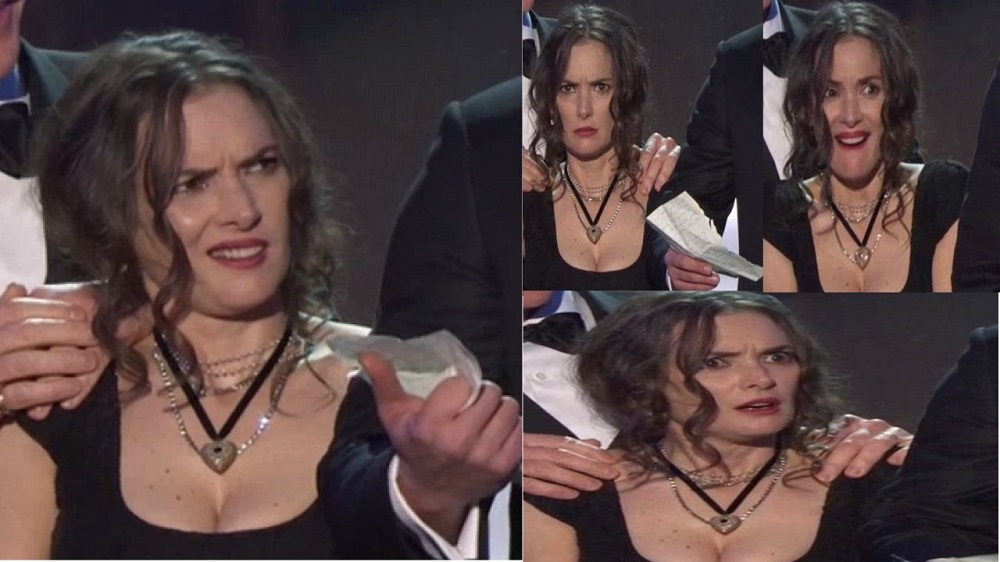 Awards shows are usually the time when actors get to make heated political acceptance speeches and after such a politically charged weekend, they went full speed ahead including the winners of Netflix‘s “Stranger Things” which resulted in one of the funnier moments of the night when Winona Ryder didn’t quite seem to know how to reach.

Her wide-eyed reactions to the very hit to the gut speech have been memed already. The combination of shock, delight, confusion and power to the people moments gave the night some levity after such an intense weekend where the world is becoming just as concerned about America’s president as many Americans already are.

Have a show like “Stranger Things” sweep the SAG awards was a great metaphor for the feeling. Many know that if there isn’t some push back against Donald Trump‘s ongoing executive orders, there will be stranger things coming at us. 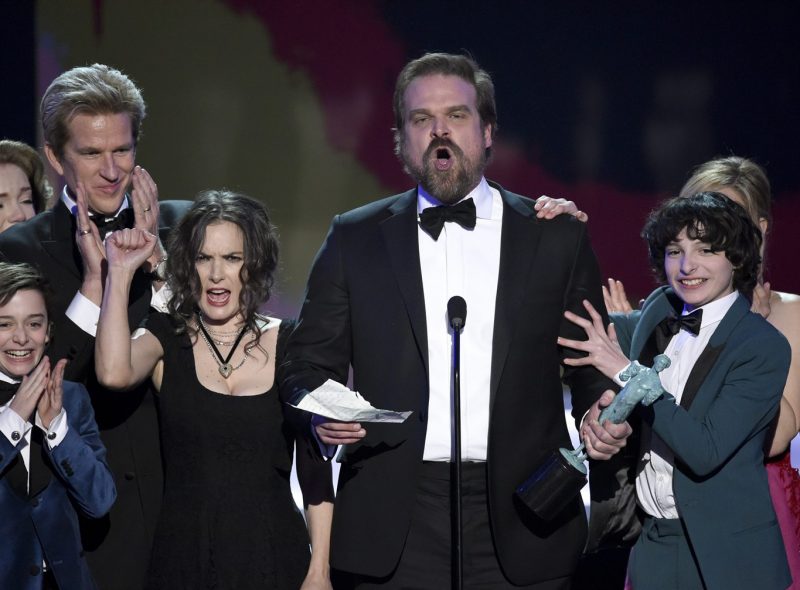 Ashton Kutcher set the tone for the evening, welcoming “everyone in airports who belong in my America,” alongside SAG members and viewers at home. Sarah Paulson, who scooped an award for her role in The People vs. OJ Simpson, used her speech to ask for donations to the ACLU, while Bryan Cranston slipped into character as president Lyndon B. Johnson to offer a warning to Donald Trump: “don’t piss in the soup we’ve all got to eat.”

Moonlight star Mahershala Ali also added an emotional take on the subject of identity and acceptance, referencing his own Muslim faith, and explaining how it didn’t stand in the way of his love for his mother — a Christian pastor. Julia Louis-Dreyfus took more direct aim at Trump’s executive order, calling it a “blemish” on the country, and un-American.

“Stranger Things,” Netflix’s supernatural thriller that earned breakout buzz in its freshman season, deprived three-time consecutive winner “Downton Abbey” of one last trophy for its concluding year. The streaming service claimed a leading four awards as the traditional broadcast networks were shut out, something they’re getting used to.

In the Donald Trump presidential era, awards ceremony viewers may have to get used to especially heavy doses of politics amid the glitz.

“In light of all that’s going on in the world today, it’s difficult to celebrate the already celebrated ‘Stranger Things,” said the show’s David Harbour, accepting the award for best TV drama series ensemble on behalf of 15 fellow cast members heavy on teens.

In a lengthy speech that reflected the evening’s consistently activist tone, Harbour suggested that people follow the lead of his lawman character and “punch some people in the face when they seek to destroy the weak and the disenfranchised and the marginalized.”

“I’m shocked. I’m probably not as shocked as Jeffrey, but I’m pretty shocked. I would like to go against the strain this evening and thank President Donald Trump for making Frank Gallagher seem so normal,” the actor said, referring to the reprobate dad he plays in Showtime’s “Shameless.”

Louis-Dreyfus, who was honored as best TV comedy actress for HBO’s “Veep,” also started off on a lighter note.

“Whether the Russians did or did not hack the voting of tonight’s SAG Awards, I look out on the million or probably even the million and a half people in this room, and I say this award is legitimate and I won. I won, the winner is me, landslide,” she said, referring to Trump’s preoccupation with his loss of the popular vote.

Turning serious, Louis-Dreyfus called herself an immigrant’s daughter and an American patriot who feels compelled to say “this immigrant ban is a blemish and it is un-American,” a reference to Trump’s order to halt immigration from seven predominantly Muslim nations.

Netflix’s big night included “Orange Is the New Black,” which won best ensemble in a comedy series for the third consecutive year, and star Taylor Schilling had something to say.

“We stand up here representing a diverse group of people, representing generations of families who have sought a better life here from places like Nigeria, the Dominican Republic, Puerto Rico, Colombia, Ireland,” Schilling said, “and we know that it’s going to be up to us and all of you, probably, to keep telling stories that show what unites us is stronger than the forces that divide us.”

Two stars of Netflix’s British royal saga “The Crown” were winners: Claire Foy, who starred as Queen Elizabeth II, and John Lithgow for his portrayal of Winston Churchill in the series.

Sarah Paulson, an Emmy winner for her role as prosecutor Marcia Clark in FX’s miniseries “The People V. O.J. Simpson: American Crime Story,” triumphed again and used part of her time on stage to call for donations to the ACLU.

Bryan Cranston, honored for playing President Lyndon Johnson in the HBO movie “All the Way,” offered wry guidance for the new U.S. president.

“I’m often asked how would Lyndon Johnson think about Donald Trump. And I honestly feel that (president No.) 36 would put his arm around (president No.) 45 and earnestly wish him success,” Cranston said. “And he would also whisper in his ear something he said often, as a form of encouragement and a cautionary tale, ‘Just don’t piss in the soup that all of us gotta eat.'” 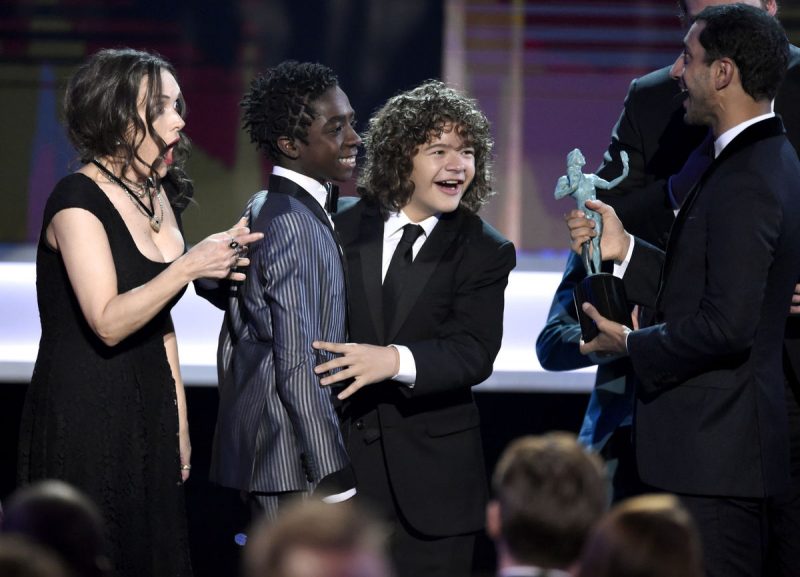 Outstanding Performance by a Cast in a Motion Picture

Manchester by the Sea

Outstanding Performance by a Male Actor in a Leading Role

Casey Affleck, Manchester by the Sea

Outstanding Performance by a Female Actor in a Leading Role

Emily Blunt, The Girl on the Train

Outstanding Performance by an Ensemble in a Drama Series

Outstanding Performance by a Female Actor in a Drama Series

Outstanding Performance by a Male Actor in a Drama Series

Sterling K. Brown, This Is Us

Riz Ahmed, The Night Of

Winner: Bryan Cranston, All the Way

John Turturro, The Night Of

Outstanding Performance by a Male Actor in a Supporting Role

Lucas Hedges, Manchester by the Sea

Outstanding Performance by a Female Actor in a Supporting Role

Michelle Williams, Manchester by the Sea

Outstanding Performance by an Ensemble in a Comedy Series

Winner: Orange Is the New Black

Outstanding Performance by a Male Actor in a Comedy Series

Outstanding Performance by a Female Actor in a Comedy Series