Samsung is in for a comeback after the debacle of the you-know-what. What’s intriguing is that they decided to follow Microsoft’s path of turning their mobile phones into portable CPUs. Samsung DeX, short for Desktop Experience is among several features highlighted in the recent Galaxy S8 release. Will this new feature take off? Microsoft’s and other companies’ attempts at this technology has not reached killer-app status. Samsung fans are almost as rabid, err… as avid as Apple’s. If this works and gets adopted at their end, word of mouth can spread and Android may really be on its way to the desktop.

From that short video, they have this writer sold. It would sure be fun to show off DeX at the next weekly meeting, connect it to an HDMI projector and do my presentation. Their plug and play implementation is great, and the desktop looks awesome. Working within DeX seemed smooth and didn’t show any noticeable lag. The Office version on the Samsung Galaxy S8 looked just like it would on a normal desktop. Something busy road warriors would appreciate. With phone and DeX dock in the briefcase, they could work almost anywhere.

The DeX dock is circular and compact. It has an HDMI port, an Ethernet port for LAN connectivity, USB Type C for power and two USB Type A ports for wired keyboards and mice. The dock also supports Bluetooth for wireless mice and keyboards. The phone connects via a USB Type-C port in the middle of the device. The top of the dock swings a little to reveal the USB connector and forms a cradle for DeX supported phones, which for now is the Galaxy S8. 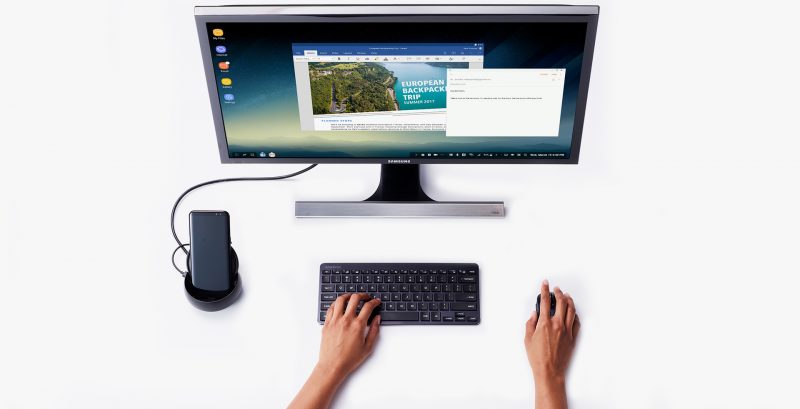 As mentioned, the desktop looks great. Samsung tweaked its Android OS to be optimized for bigger screens. It has an All Apps menu at the lower left which functions as a Start menu, a taskbar at the lower right much like another familiar OS. The OS features multi-Window support which is very useful. The interface is familiar and intuitive, and Office users will feel right at home using DeX. Samsung says that they’re working with other app developers to support DeX. Microsoft has done a pretty god job at making Office work seamlessly with DeX. Other third party apps that support DeX are Adobe Lightroom and Photoshop Express.

Why did Samsung take this approach? It’s tough to think of more features to put in another flagship phone, but they still pull it off. They might as well include Continuum-like support. Plus, the phone’s powerful Snapdragon 835 processor and built-in 4GB RAM coupled with its desktop-optimized Android 7 Nougat version can very well support it. The DeX dock, however, is not included but sold separately for about $150. 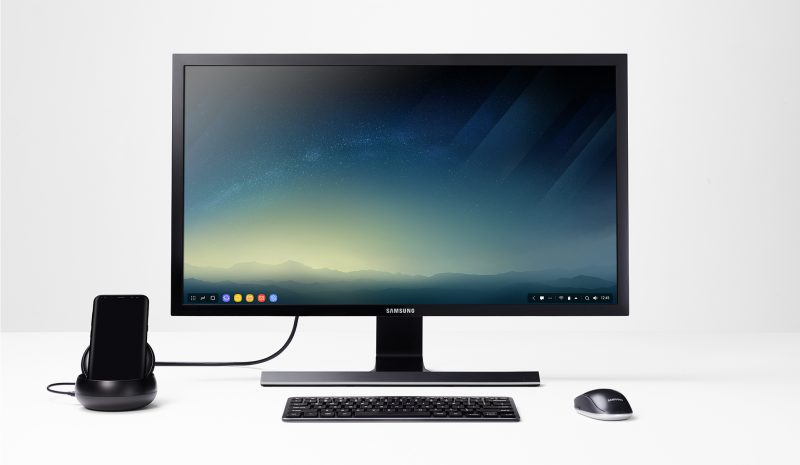 The Samsung Galaxy S8 comes in two versions. The Galaxy S8 and the S8+. The specs are as follows:

Other innovations by Samsung include the removal of the physical Home button by minimizing the upper and lower bezels to support the longer screen. There’s still a Home button hidden on the lower bezel. A pressure-sensitive area with haptic feedback. The fingerprint reader was moved at the back like some Asus phone models but located near the camera.

The most worrisome about Samsung products nowadays is the battery. Samsung said that the company has improved its quality testing measures after the ‘incident’ and promises that it won’t happen again with its future products.

Another major update to the S8 is its new voice assistant called Bixby. What makes it different from other voice assistants is that you can navigate your phone with Bixby. Anything that can be controlled with touch can be done using Bixby. Just don’t make Bixby angry. You won’t like it when he’s angry. Just kidding.

Since Samsung has opted to maximize its CPU with DeX, it makes sense that it also has improved VR capabilities. Samsung announced an improved Gear VR and a new motion controller designed to improve the experience.

So Samsung has done several new improvements. Question is, will Apple be caught sleeping on the job again like what happened when Microsoft announced the Surface Studio? Apple has been busy lately as well. We’ll see when they release the next major iPhone iteration.