Home All News Politics Roy Moore vs Doug Jones: What to watch for in Alabama’s Senate... 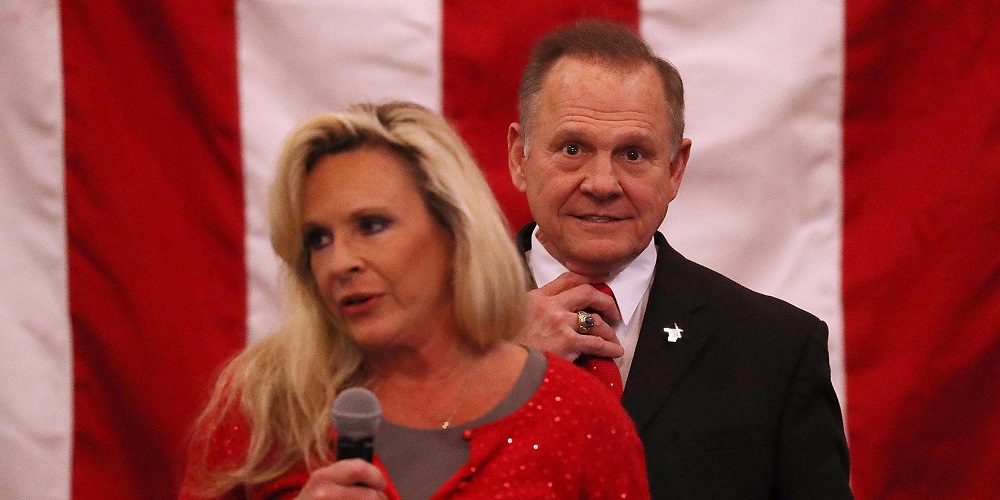 Tuesday’s Alabama special Senate election seems more like something out of a Will Ferrell comedy, but sadly, this is the state of America right now with Republican Roy Moore duking it out against Democrat Doug Jones.

Moore’s wife Kayla attracted some major headlines as she spoke at a rally Monday evening with this:

And her comment which was quickly picked up everywhere. The fact that she had prepared this statement in advance says so much about their view of the world and how out of step they are with it.

“Fake news says he doesn’t like women in leadership positions, yet he supports me as the president of the Foundation for Moral Law, that he started 15 years ago today. So happy birthday, Foundation for Moral Law. Our chairman is also a woman and a prominent officeholder in the bank, not to mention all of the women that work in our campaign, and there are many.

Fake news would also have you think that my husband doesn’t support the black community. Yet my husband appointed the very first black marshal to the Alabama Supreme Court, Mr. Willie James. When he first took office as chief justice many years ago, he brought with him three people from Etowah County; two were black, and one of them is here tonight. We have many friends that are black, and we also fellowship with them in church and in our home.

Fake news would tell you that we don’t care for Jews. I tell you all this because I’ve seen it all, so I just want to set the record straight while they’re here. One of our attorneys is a Jew. We have very close friends that are Jewish and rabbis, and we also fellowship with them.”

Alabama voters headed to the polls Tuesday in Alabama’s special Senate election and faced two choices: Either continue the “Trump miracle” in Washington or allow “decency” to prevail back home.

At the center is Roy Moore — “Judge Moore,” to his supporters. The 70-year-old Republican was twice ousted as state Supreme Court chief justice after flouting federal law, and now he’s attempting a political resurrection amid accusations of sexual misconduct with teenage girls when he was in his 30s.

More than two dozen people stood in line in the chilly morning air early Tuesday morning at Legion Field, a predominantly black precinct in Birmingham, to cast their ballots in a stadium office. Blue-tinted posters of college football players and cheerleaders lined one wall, and about 20 Doug Jones posters were planted near the parking lot.

“I do not want to see Roy Moore go in there. We don’t need a pedophile in there,” said Teresa Brown, 53, an administrative assistant at the University of Alabama at Birmingham who was voting at Legion Field. “We need someone that’s going to represent the state of Alabama, work across party lines … just be there for all the people, not just a select few of the people.”

Al Bright, 63, who does refrigeration repair, voted for Moore.

“I just believe regardless of the allegations against him, I believe he is an honorable man,” Bright said.

Bright said he realized some people criticize Moore because he was removed from office because of actions he took to try to block same-sex marriage in the state.

“I don’t think there’s anything wrong with that because I believe in that as well,” he said. “I feel the same — marriage is between a man and a woman.”

Mary Multrie, 69, who works at a children’s hospital and voted for Jones, said she was not influenced by accusations of sexual misconduct against Moore because she already did not like him. “He’s not a truthful man,” Multrie said of Moore. “He talks about God, but you don’t see God in his actions.”

Alabama Secretary of State John Merrill said early Tuesday that turnout for the special election could be as high as 25 percent of registered voters.

The winner will take the seat previously held by Attorney General Jeff Sessions. Republicans hold a narrow 52-48 Senate majority. A routine election in Republican-dominated Alabama wouldn’t be expected to alter that balance because Alabamians haven’t sent a Democrat to the upper chamber of Congress since 1992. President Donald Trump notched a 28-point win here in 2016 and remains popular in the state.

But Moore’s baggage leaves the outcome enough in doubt that both Trump and his Democratic predecessor, Barack Obama, have weighed in with last-minute robocalls trying to sway voters.

The intensity also has spawned a steady stream of fake news stories that fill social media feeds of interested people in Alabama and beyond. A media analysis, in cooperation with Facebook, counted as many as 200 false or misleading reports heading into the weekend. One website claimed one of the women who have accused Moore of sexual misconduct had recanted. She did not. Meanwhile, Moore’s detractors took to social media to claim he had written in a 2011 textbook that women shouldn’t hold elected office. He didn’t.

In his final pitch before polls opened across the state at 7 a.m. CST Tuesday, Jones called the choice a “crossroads” and asked that “decency” prevail.

At his own election eve rally, Moore again denied all the allegations, calling them “disgusting” and offering voters a clear measure: “If you don’t believe in my character, don’t vote for me.” Earlier in the day, Moore cast himself as the victim. “It’s just been hard, a hard campaign,” he said. 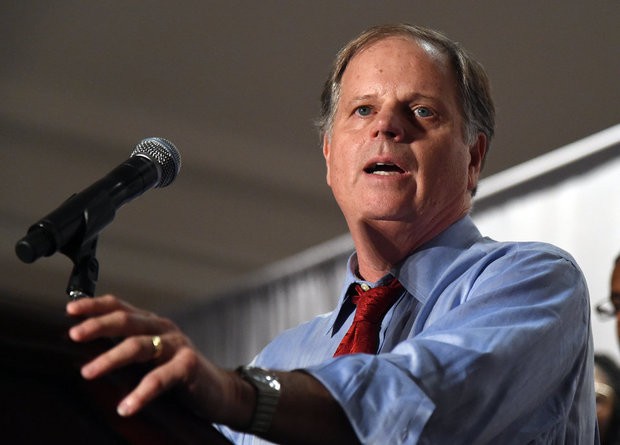 For Alabama, the outcome could be defining.

Democrats and moderate Republicans see an opportunity to reject a politician who is already regular fodder for late-night television.

Alabama’s senior senator, Richard Shelby, confirmed publicly that he wrote in a “distinguished Alabama Republican” rather than vote for Moore.

Many Republicans, however, see an opportunity to defend the state’s conservative, evangelical bent in the face of unfair liberal criticism while delivering another victory for Trump and sending an anti-establishment senator into a federal government that has been reflexively unpopular among Alabama majorities for generations.

Trump’s campaign architect and former White House adviser Steve Bannon told Moore supporters Monday evening the race is a “national election” that will determine whether the “Trump miracle” continues. Moore says he is aligned with the president and he makes similar arguments to Trump, blasting “the elite” in the “swamp” of Washington, D.C.

For Jones to win, he must build an atypical coalition, maximizing turnout among African-American voters and white liberals who often don’t combine for more than 40 percent of the electorate, while coaxing votes from enough white Republicans who can’t pull the lever for Moore.

One of Jones’ celebrity backers framed the choice as being much less complicated.

“I love Alabama,” said Leeds native and former NBA basketball star Charles Barkley, “but at some point we’ve got to draw a line in the sand and say, ‘We’re not a bunch of damn idiots.’” 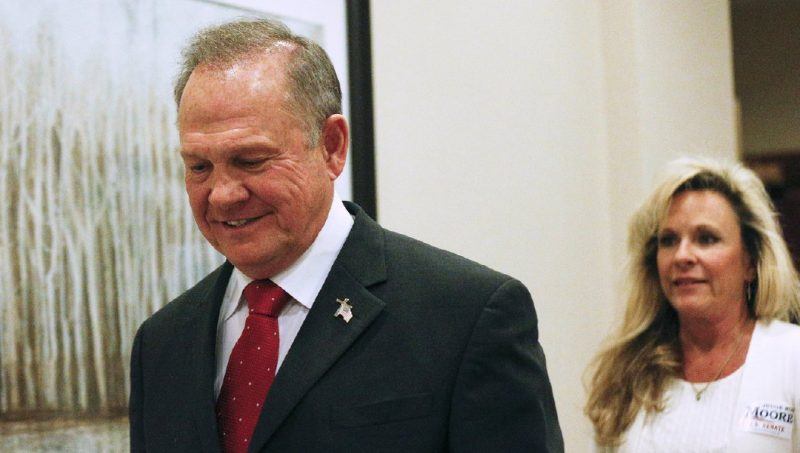 As Alabama votes to fill the seat vacated by Attorney General Jeff Sessions, the choice between Republican Roy Moore and Democrat Doug Jones has taken on outsized significance. Moore has faced allegations of sexual misconduct with teenagers, dividing the GOP and giving Democrats hope of picking up a seat in a reliably red state. Here is what to look for in Tuesday night’s results:

WHAT IS THE TRUMP DRAW?

Alabama has once already proven the bounds of President Donald Trump’s political influence. He endorsed Moore’s GOP rival, Sen. Luther Strange, in the September primary, campaigning for him in Alabama hours before he was trounced by the state’s conservative voters. Now Trump has wagered a greater sum on Moore’s candidacy. The president resisted calls from his party’s senior leadership to abandon Moore after the sexual misconduct allegations surfaced. He directed the Republican National Committee to re-enter the race on Moore’s behalf, repeatedly attacked Jones, and recorded last-minute robo-calls on the Republican’s behalf. A GOP defeat in the deep-red state would speak to the limits of Trump’s ability to sway and motivate Republican voters.

WILL DEMOCRATIC TURNOUT EFFORTS PAY OFF?

In recent days, Democrats have pulled out the stops for Jones, including recorded calls from former President Barack Obama and visits from high-profile surrogates. They’re trying to boost turnout among those most likely to be aggravated by Moore’s controversial past, including black voters, and make inroads with suburban women_who proved to be pivotal to Democratic victories last month. Strong turnout and Democratic gains on both those fronts could point to trouble for Moore, and for the GOP going into next year.

Despite a ripe political climate, high-profile coverage, and huge injections of cash, Democrats are winless in five contests for vacant Republican congressional seats this year. All have been held in reliably Republican strongholds, but the defeats have still taken their toll on a party in a struggle for its identity. Wins in Virginia, New Jersey, and Maine in the November off-year election have provided some sorely-needed optimism for the 2018 midterms, and a Senate seat pick-up in Alabama would add pep to the party’s step.

HOW WILL IT AFFECT RETIREMENTS?

Sensing a difficult midterm election looming, 16 Republican members of the House and two in the Senate have already announced they will not run again next year. The retirement gap_only six Democrats in the House and one in the Senate have said they won’t run_can be an early indicator of what’s to come in a midterm election. (A more even split of retirements exists for lawmakers retiring from Congress to seek another office.) Republican leaders are anticipating more retirements on their side from lawmakers in competitive seats where members are facing challenging and expensive contests. A Democratic victory statewide in Alabama could foretell a dire year ahead for Republicans, which could send more Republicans to announce their departures on their own terms.

WAS ROY MOORE WORTH IT?

The Republican Party’s decision to maintain support for Roy Moore stands to be a defining choice for years to come. The party chose to embrace a one-time pariah for reasons of political expediency, and then doubled-down in the face of troubling allegations of sexual assault and harassment. For the president, it’s a matter of practicality_a loss would narrow the GOP’s thin majority in the Senate even further at a time when his agenda faces critical tests. But other Republicans worry it’s a short-term ploy that has sacrificed their moral authority, and that may come back to haunt them in the coming year. Republican lawmakers have spent the past months struggling to answer questions about Moore and his long history of divisive comments, and should he win, his presence will loom large in the Capitol and on the campaign trail. If Moore keeps the Senate seat in Republican hands, it may justify the backlash for some GOP officials. If he loses, the GOP has stuck by a candidate despite accusations of sexual impropriety, and who has alienated vast swaths of the electorate, with nothing to show for it.