Home All News Movie News ‘Rogue One: A Star Wars Story,’ The Prequel We Really Needed 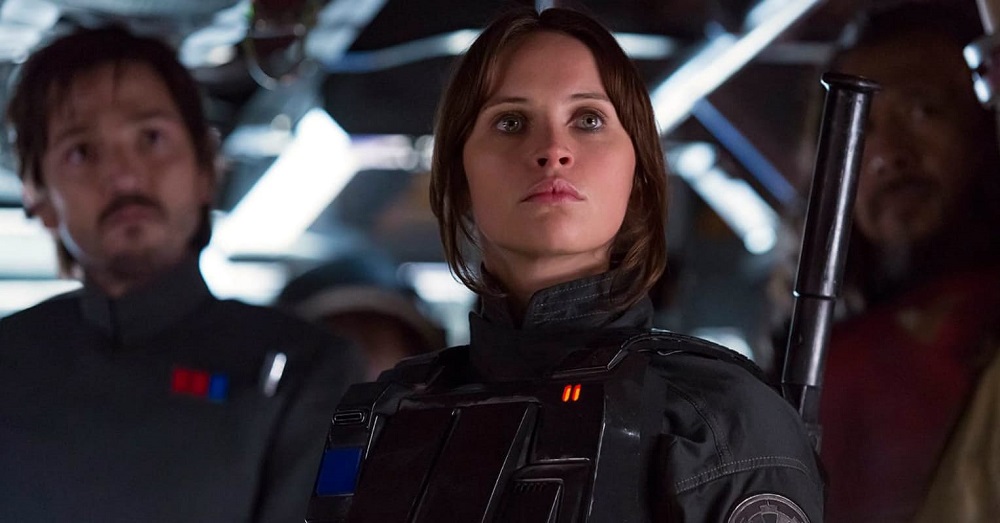 Right off the bat, Rogue One: A Star Wars Story was awesome. I found it better than Force Awakens. There, I said it. We can end it right there with that statement or you can go on and take some upcoming spoilers with a grain of salt. But since the movie is awesome, it’s still worth watching and you can judge for yourself. What makes it awesome? Why the title? Why the high praise from this sci-fi fan?

I like Star Wars but not as much as Star Trek. I like most sci-fi films that involve spaceships and space battles. I’m not so invested with the franchise that I know everyone’s name and what species the aliens are but I have watched all of the films and bits of the TV series such as Clone Wars and Rebels whenever I could. No, I don’t bother at all with the Lego cartoons. Speaking of films, Fox just gave cable viewers the entire Star Wars marathon right up to Force Awakens to get fans up to speed on Rogue One. That pushed me to watch Rogue One the next day. As I said, I’m not too invested into Star Wars that I had to follow all the hype surrounding it. After Force Awakens, I wasn’t expecting too much from it. It’s a film about how the Death Star’s plans were recovered and that was it. Then came the trailer and my interest went up. Just seeing the AT-AT walkers again in another film other than Empire Strikes Back got me excited.

But in Episode Four, when they said that many paid the price in getting the information on the Death Star, I’ve always envisioned it as some sort of minor operation where a few rebel spies fought their way and were killed to acquire the Death Star plans. As mentioned, I wasn’t too invested in the franchise to read in or play any of the books or games that may have tackled the scenario. It’s actually a good thing as Rogue One came and made me and others appreciate the scope of the sacrifice that many people gave in order for the rebellion to gain the data on that disk that Princess Leia jammed into R2D2. When watching A New Hope, you wouldn’t think of how much the Rebellion actually went through to get that data. It’s a Star Wars film so they had to give it an epic treatment which they really nailed. Rogue One: A Star Wars Story is the prequel we never knew we wanted. In my opinion, it’s better than Force Awakens which was almost a re-telling of A New Hope for the younger audience, much like how Doctor Strange was almost like Iron Man. Unlike Force Awakens, Rogue One was a more original story.

Let’s get back to our initial low expectations. Many people think that Disney is now cashing in on Star Wars by producing a new trilogy starting with Force Awakens. Of course, what else would they do with the franchise after giving George Lucas a large amount of money? As if another trilogy wasn’t enough, we now have Rogue One and that upcoming Han Solo film. Soon we could even get a separate Darth Vader film (that would be awesome) and maybe a film for the Fett. Such commercialization makes fans worry about film quality and whether or not these new films could ruin the spirit of the franchise. We were sort of content with how the series ended with Return of the Jedi, if you watched the series in chronological order. There’s probably no harm in expanding the beloved three-film franchise to six and from six to nine provided it’s done properly. While not one of the main films, Rogue One was done properly. 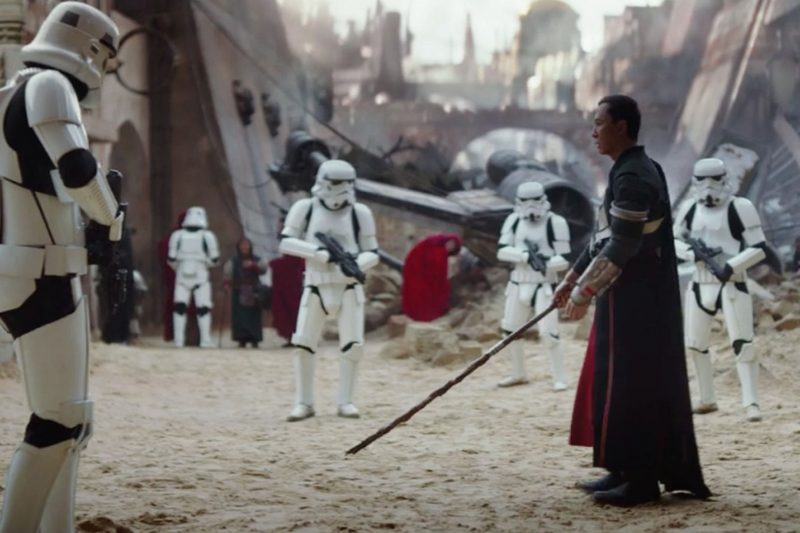 Yes, Rogue One was not one of the main films and they pointed it out from the start. Either the theater screwed up or there was really no opening crawl. Rogue One didn’t start the movie linearly. It began with a flashback of Jyn Erso’s (Felicity Jones) separation from her father Galen Erso (Mads Mikkelsen). Again, wasn’t into the hype so I was surprised to see Mads Mikkelsen (fresh from playing Kaecillius in Doctor Strange) early in the film. Galen was very important in finishing the Death Star on schedule. He’s already in resistance to the empire and since the Death Star can be constructed without him, he agrees to continue so he can covertly include that iconic weakness we all know by now. Young Jyn had to be sent away so she wouldn’t become a hostage of the empire to be taken care of by rebel Saw Gerrera. Jyn would later become instrumental in getting the plans of the Death Star.

Jyn is one of the many interesting and diverse new characters along with Cassian Andor (Diego Luna), Rebel Alliance intelligence officer; Chirrut Imwe (Donnie Yen) a blind practitioner of the Force and former guardian of the Kyber crystals and his heavily-armed companion Baze Malbus (Jiang Wen); Bodhi Rook (Riz Ahmed), an imperial pilot who defected to the rebels; Saw Gerrera (Forest Whitaker) and K2SO (Alan Tudyk), a reprogrammed imperial droid. We even see Jimmy Smits reprise his role as Bail Organa whom we have not seen since Revenge of the Sith to provide some connecting tissue to the previous trilogy apart from Darth Vader. Other Star Wars favorites are seen in this film such as Mon Mothma, Moff Tarkin and cameos of R2D2, C3PO and young Princess Leia. The film did a good job in restoring the likenesses of Moff Tarkin (Peter Cushing) and the youth of Mon Mothma and Leia Organa. The rest of the effects are what we expect to see in a Star Wars film. One of the more interesting characters in the film was the droid K2SO. If BB8 took over for R2D2 in The Force Awakens, K2SO became the obnoxious and violent version of C3PO for Rogue One. This film also showcased aliens, ships and vehicles not yet seen in the franchise. It looks like collectors will have to shell out more for new action figures and kids will have more vehicles and Lego sets to play with.

One cool thing is that the theories the Death Star was basically a gigantic light saber is proven true here as the Death Star made use of Kyber crystals, a material first introduced on TV that’s used to power lightsabers. Another cool thing is the droid K2SO. As a reprogramed imperial droid, he’s basically the Star Wars version of the T-800. The film is action-packed especially in the final act reminiscent of the battle on Endor and the space battle in Return of the Jedi. No furry creatures were harmed in the making of the film. Jyn, Cassian and K2SO struggle to steal the plans for the Death Star while everyone else is busy fighting the empire on the ground, outside against AT-AT Walkers, new Tie fighters and new black suited imperial troopers. The rebel fleet meanwhile is fighting the empire in space.

What makes Rogue One: A Star Wars Story very different is that not all heroes get to live through their battles. They weren’t kidding when they said in A New Hope that many died to get the information on the Death Star. The destruction of K2SO was the first hint, followed by Bodhi and then everyone else. But following Rogue One’s sacrifice, we see the epic lead-up to the first scenes in A New Hope and Darth Vader in one of his most violent scenes yet. It’s a shame we’ll never get to see these characters again but it’s the tragedy that gives this movie its different flavor.

How good is Rogue One as a Star Wars movie to this author? It’s up there with Empire Strikes Back. It put the war in Star Wars. It’s emotional and unfortunately tragic and it set up A New Hope quite well.