President Donald Trump is proving that he gets what he wants, and his choice for secretary of state Rex Tillerson is moving closer to getting that top spot.

Even with the concerns of his Russian business ties, Senators John McCain and Lindsey Graham have decided to vote for the nominee.

McCain said on ABC‘s “This Week” that he was “very cautious” about the decision to vote for Tillerson. The Arizona senator said he was reassured after having several conversations with Tillerson about his views on Russia and what his duties would be as secretary of state.

After McCain’s appearance, he and Graham released a joint statement sharing their support for Tillerson’s nomination.

“Though we still have concerns about his past dealings with the Russian government and President Vladimir Putin, we believe that Mr. Tillerson can be an effective advocate for U.S. interests,” they wrote. “The views that Mr. Tillerson has expressed, both privately and publicly during the confirmation process, give us confidence that he will be a champion for a strong and engaged role for America in the world.”

Graham appeared on CBS’s “Face the Nation” on Sunday and shared his support for Tillerson as well.

The South Carolina senator said that Tillerson earned his support after the nominee visited his office and showed his understanding of America’s need to use “soft power,” which includes the use of foreign aid and regional partnerships.

“This is why I am voting for him,” Graham said.

“In my office visit, [Tillerson] said that, when America doesn’t lead, other people will, and the vacuum is always filled by bad actors,” Graham said. “He said that we have to have a foreign policy that engages the world. We need to lead from the front.”

The support of McCain and Graham nearly seals the approval of Tillerson’s nomination and will allow Trump to feel confident that he will earn a simple majority on the Senate floor. However, the Foreign Relations Committee still has to vote on Monday, and there is one Republican hold out who could scuttle the proceedings. 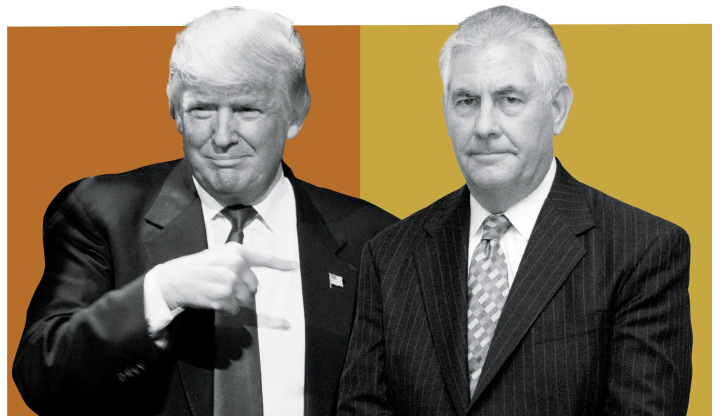 Rex Tillerson, the former Exxon Mobil executive with close business ties to Russia, saw his prospects of becoming secretary of state brighten Sunday after gaining the support of two influential Republican senators who had wavered on the nomination.

“Though we still have concerns about his past dealings with the Russian government and President Vladimir Putin, we believe that Mr. Tillerson can be an effective advocate for U.S. interests,” Sens. John McCain, R-Ariz., and Lindsey Graham, R-S.C., said in a statement.

Many Democrats and Republicans McCain, Graham and Sen. Marco Rubio of Florida have questioned whether Tillerson has too many conflicts of interests to champion U.S. policy abroad, especially in Russia.

As CEO of Exxon Mobil, Tillerson spoke out against U.S. sanctions levied on Moscow following its annexation of Ukraine’s Crimean Peninsula in 2014. The penalties cost the energy giant hundreds of millions of dollars.

McCain and Graham announced their decision before a vote Monday on Tillerson by the Senate Foreign Relations Committee. While McCain and Graham aren’t committee members – McCain leads the committee that oversees military policy, while Graham oversees a subcommittee on military personnel – their signal of support could make it tougher for Rubio to remain a holdout.

Their support also would make it tough for Democrats to peel off enough Republican votes to oppose his nomination. The Senate is divided by 52 Republicans and 48 Democrats; Tillerson’s confirmation needs a simple majority.

Graham told CBS’ “Face the Nation” that he was persuaded to back Tillerson after a private meeting with the nominee. According to Graham, Tillerson told him “when America doesn’t lead, other people will, and the vacuum is always filled by bad actors. He said that we have to have a foreign policy that engages the world. We need to lead from the front.”

McCain said on ABC’s “This Week” that he talked to Tillerson about his views on Russia and his duty heading a major corporation.

“Listen, this wasn’t an easy call,” said McCain. “But I also believe that, when there’s doubt, the president, the incoming president, gets the benefit of the doubt.”

Rubio, who challenged Trump for the GOP nomination last year, clashed with Tillerson at a hearing this month. Rubio bridled at Tillerson’s refusal to label Putin a “war criminal” or condemn human rights violations in Saudi Arabia and the Philippines in strong enough terms. He chided Tillerson over the need for “moral clarity.”

Hours after Trump was sworn in on Friday, Rubio was tight-lipped, saying he would make his decision “certainly before the vote” Monday and that Tillerson’s responses to written questions had addressed “some of” his concerns.

The committee is narrowly split between 11 Republicans and 10 Democrats so Republicans must all hold together to vote Tillerson out favorably, unless he gets some Democratic backing.

Still, a “no” vote from Rubio would not doom Tillerson’s confirmation, because the nomination could go directly to the Senate floor even without a positive committee recommendation. But it would be an embarrassing rebuke to Trump just as his presidency gets underway, with questions swirling about his ties to Russia.