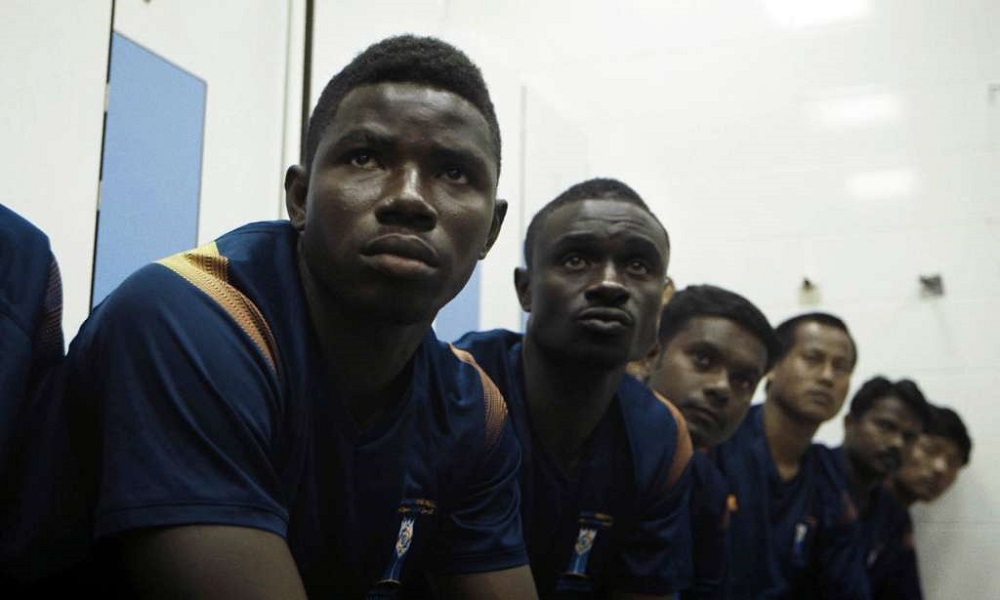 Qatar has been surrounded by controversy since 2010 when it was announced that it would play host to the 2022 FIFA World Cup. Everything from bribery allegations to scrutiny over the poor labor conditions of hundreds of thousands of the migrant workers that have poured into the country for work.

Like many great documentarians, Director Adam Sobel didn’t search out his subject matter for “The Workers Cup,” it found him.

Sobel never intended to end up in Qatar, but it was 2010, jobs were scarce in the U.S. and his longtime girlfriend – now his wife – had just been offered a job teaching at a Northwestern University Qatar. So they went.

While there, Sobel found work with a local production company that did news stories and documentaries for outlets like BBC, CNN, and HBO. One particular story was requested frequently: That of the migrant workers who were building the facilities for the 2022 Qatar World Cup. He didn’t know it at the time, but the assignment would ultimately provide the foundation for his documentary, “The Workers Cup,” which premiered Thursday night at the Sundance Film Festival.

Sobel was able to answer some questions about his film and how he was able to get access that most people couldn’t. 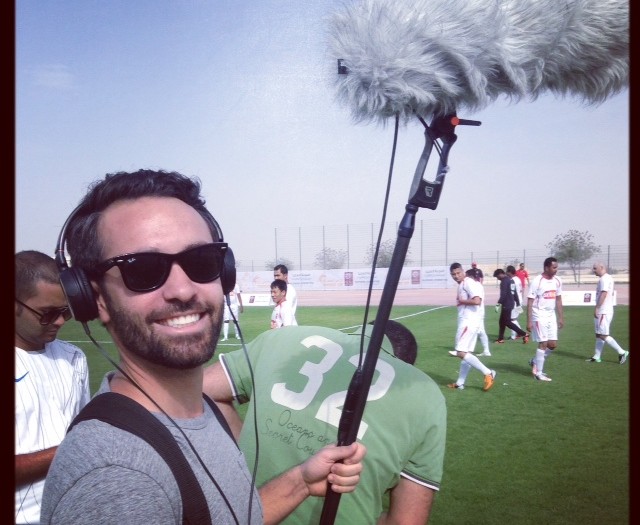 Why did you decide to document workers’ conditions and this workers’ tournament leading up to World Cup 2022?

I lived in Qatar for the last five years. I moved out there in 2011 and my wife, who was my girlfriend at the time, moved out there in 2010. She got there just before they were awarded the World Cup, or the right to host the World Cup, I should say. When this got announced, it was so cool that she was there and then I think immediately, the world’s attention turned toward Qatar, which was great for them, it’s what they were hoping for, but at the same time, that level of scrutiny came with a lot of challenges for the country, and it really called into question, especially, the labor practices.

For me personally though, I moved out there in 2011, and I was working in journalism doing current affairs news and documentaries. While I was there, a lot of the stories were about migrant workers for ABC, CNN, all sorts of international outlets. But the problems with those stories was that because the subject is really sensitive within the country, we were obligated to work under cover a little bit or at least hide the identity of the contributors. I just felt like in doing that, you lost the human touch. I wanted to make this film, and ever since I arrived in the country, you feel immediately this disconnect between the social classes. The only way to interact meaningfully with workers as a white-collar expat was to make this film because you’re just living worlds apart.

Some documentaries are just “drop-ins” to the environment before shooting, but you truly lived in Qatar. How did that help your perspective while making this film?

I think it provides really important insight, but I don’t know if it leads to a lot of understanding, because it’s mostly about implicating somebody. I was just much more interested in creating empathy for people who are living this life. Our characters certainly find themselves in very dismal circumstances, but they don’t think of themselves like that on a day-to-day basis. Boiling them down to just victims … it just tells this monolithic story that doesn’t really exist in reality. They are these individuals with their own hopes and dreams, and I think those should be celebrated.

Was there any desire during the process to tell it from an outside point of view to admonish the companies with these poor labor practices, or did you want to tell it from the ground up?

I never wanted to do, like, an exposé. I always wanted it to be from the ground up and inside out. Starting from one character’s eyes and slowly developing the full picture. That was practical as well as being intentional because I’m living over there and obviously media restrictions are pretty significant. So, I’m going to follow the law — everything we did was totally legal. We just couldn’t make this film if we wanted to condemn or chastise.

We were able to get access because we lived there, we each lived there for many years, so we had lots of contacts that trusted us to tell the story in a way that was fair. The process of getting access required us to speak to, I’d say we got the blessing of some very important people in the country who would like to remain nameless. They didn’t give us their express authorization, but they gave us their blessing, which opened certain doors. By the nature of them being involved with World Cup Construction, that means that they actually have a higher standard for their workers than a lot of the other companies in the country. So that was good for us because that meant that they weren’t breaking the law, which meant we could film with them.

I think that is a key takeaway. I think people watch the film and maybe see the company as an antagonist, but I hope that they can look far beyond that and realize that the real problem lies in the system. All of us are, in some way, complicit in the system, because GCC has a British partner. There are plenty of Western construction companies and American construction companies that are based there that are profiting off of these lower labor standards.

How did you decide on making the tournament and this particular team a focal point of this documentary?

Without the tournament, I don’t think that we would have been able to secure the access because it was something that we knew people in Qatar wanted to promote. There was a promotional element to the event and marketing element to the event. And the fact, obviously, that it dovetails so nicely with the World Cup — which is why Qatar is relevant right now in the world — was too good of an opportunity to pass up as the story.

Originally the idea was we wanted to film maybe one player from many different teams and do more of a panorama, but lo and behold nobody wanted to give us access except for GCC, so it made the decision very simple. [Laughs] But also I would say there’s an energy to them that a lot of the other teams just didn’t have. [The others] didn’t have that spark or that life. When we met them, I remember we went to training, and they were doing this dance warm-up, and I said: “These guys are alive.” Another thing I liked about them is that they had a multinational group of players, which is more representative of the whole system. Most workers come from the Indian subcontinent, not from Africa, but more workers are coming from Africa these days because that’s where Qatar is recruiting to offset the number of Nepalis and Indians in the country. That was interesting, as well, to see those dynamics. We got lucky — they kind of chose us.

At one point in the film, a new worker arrives from Ghana that becomes the team’s starting goalkeeper. He says he’d rather be making money “in hell” in Qatar than be in heaven in his home country. What was your reaction to that quote?

It’s just a really complicated situation. I think that first of all, that interview was just shortly after Samuel arrived in the country, so if that was a year later, he may feel differently. But you do bring all of those hopes into the situation and many of our characters — the principal shooting on this ended about a year and a half ago — a lot of our characters are still there. Some of our characters went home and then went back. It’s not a black-and-white equation, right? You have to weigh the opportunities you have everywhere in the world in your personal circumstance at home. People are grateful for certain opportunities, but that isn’t a license to take advantage of them. … If you can take somebody who has very little in life with these dreams and these ambitions and you don’t live up to them, that’s a certain kind of exploitation. This exploitation of their expectations, it’s bad and demoralizing. 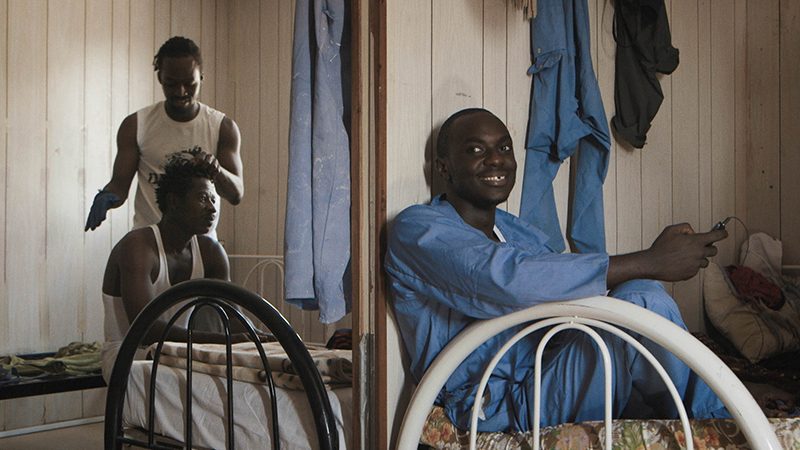 “Because the subject is so sensitive and because media restrictions were so significant, we either had to hide people’s identities or work undercover. The human touch was lost,” Sobel said. “We wanted to do something that went much deeper than that and really honored the workers for their sacrifices and their hopes and their dreams rather than doing something that just saw them as victims … I wanted to build empathy for the workers instead of sympathy.”

The film centers on the multinational men, from Kenya, Ghana, India and the Philippines, who have given their lives over to slavery-like contracts and dangerous conditions to build the stadiums from the ground up. One man, Kenneth, who was a soccer player in Ghana, shares his story about how a recruiter had told him that if he came to Qatar, he’d get a club soccer contract. It was a lie, and now he’s stuck in Qatar under horrific circumstances.

“We’ve had a lot of context about how the recruiting agents are selling a false bill of goods but certainly I didn’t expect that to be wrapped up in a professional soccer contract,” Sobel said.

The title of the documentary refers to the FIFA-sponsored “workers cup” whereby teams from different construction companies play against one another in a tournament. For men like Kenneth, it takes on a greater poignancy. Yes, it’s a welcome distraction from the conditions, but the fact remains that they are still stuck there.

“We saw (the tournament) as an opportunity because we knew they were interested in promoting this and showing to the world that workers welfare standards were improving,” Sobel said. “There was a definite PR angle there that we took advantage of and we somehow managed to stick around and keep shooting in the camps. We were able to actually get pretty close to the story.”

Sobel worked on the documentary for three years and kept it completely secret for two due to the sensitive nature of what he planned to show and the strict media standards in the country. He’s excited that his subjects are getting their voices heard at Sundance.

“It’s a story about these guys whose lives have been sacrificed in some way for our own entertainment and that in and of itself reveals that we’re all complicit in the system,” Sobel said. “This is a story of globalization.”