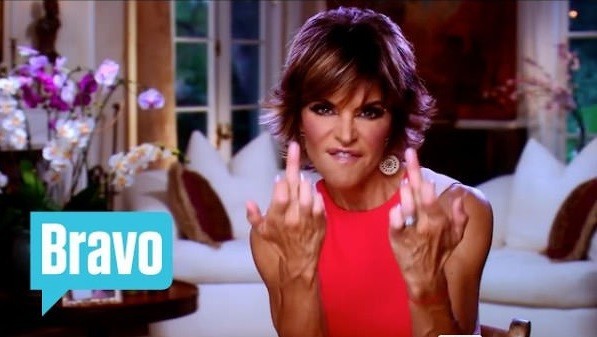 Just a heads up; if you are a really big fan of Real Housewives of Beverly Hills you can head over to former housewife Camille Grammer’s garage sale, where she is selling one of the most infamous set pieces from the series. Back in 2010, the ladies of the show had a huge spat while dining at Camille’s house. While there, Kyle Richards went into full-out attack mode when Camille’s friend, Allison Dubois told her she had “achieved nothing in [her] life.” Therefore, super fans of the show might be interested in picking up the very table where all the drama went down. However, you are going to have to be willing to put down $14,500 for it.

If you are not willing to fork over that kind of cash, you can still indulge in the Real Housewives in this week’s new episode. It opens up in Florence, Italy, where Kyle and Lisa V’s families are enjoying themselves on vacation. The two women head out for a shopping trip, where Kyle tries to pick up a last minute outfit for her niece, Nicky Hilton’s wedding.

Meanwhile back in Beverly Hills, Eileen continues to sustain her spot as the most annoying housewife. While her husband is trying to drop hints to get her to be quiet, she continues to natter about losing her iPad. However, she does admit that she knows her family thinks she’s “a bit neurotic.” So, at least, she is self-aware.

Lisa V and Ken split ways with Kyle’s clan, as they helicopter off to Monte Carlo. The helicopter was sent by a friend of theirs, which triggers Ken to joke, “when are you [Lisa] going to get me a helicopter?” Honestly, I too am surprised that the couple doesn’t already own one. They are undoubtedly the most extravagant of the cast members.

While Yolanda goes to the naturopath to get an IV of Vitamin C, we are introduced to her friend who she recruited to join the show, Erika Girardi (otherwise known as Erika Jayne). Erika is a singer who has found quite a bit of success in the dance-music genre. From the first impression of her, she definitely does not lack confidence. This is demonstrated by her boasting, “I have access to the best…What am I going to look like a hag?! Of course, I look good.”

Kyle gets back from her trip and goes for lunch with Lisa Rinna and Eileen. While there, the two ladies confront Kyle about her sister’s legal troubles that were being played out in the tabloids at the time. While this episode was being taped, Kim had “fled” from rehab, but was shortly after arrested and charged for assaulting a police officer. However, it seems like Lisa knows more about Kim’s situation than Kyle does, simply from keeping up-to-date with the latest headlines.

The conversation is then redirected to Yolanda. Eileen explains how sick she looked when her and Lisa went to visit her (in the last episode). Kyle tries to explain her point of view, as she doesn’t feel that Yolanda should be stuck on her Lyme disease diagnosis, especially if she is getting worse despite all of the treatments she is undergoing.

Shortly after, Lisa V and Lisa R are seen jetting off to Ohio to retrieve Ken’s birthday present, a super-miniature horse. Unfortunately, when they get there, they are hit by an intense rain and thunderstorm, which threatens their plan to get back home as fast as they can.

Afterwards, we get a more thorough introduction to the new cast member, Erika Girardi. As she walks around her extravagant property, she introduces her husband of 15 years, “Mr. Girardi.” She goes on to explain how he was a regular customer at her work, where she was working as a waitress. Erika exclaims, “Being broke sucks and being rich is a lot better.” Evidently, she already seems to fit in well with the other housewives.

Back in Ohio, fortunately, by the time the Lisas make it to the horse ranch, the weather had cleared up, and the sun was out for them to meet Ken’s new pet. Lisa V was in heaven, as she cuddles with the tutu wearing horse.

Shortly after, Lisa V notices that the horse has a slight problem walking on her right front leg. The owner claims that she is completely fine, but Lisa opts to call her husband Ken and get his advice. Unfortunately, Lisa ends up leaving without the horse – as she wants a vet to look it over and make sure everything is in tip-top shape before she flies it out to Beverly Hills.

Later in the episode, Erika brings us into her pop-star world as she goes to rehearse for her show. According to her, her alto ego (Erika Jayne) is “sassy, class and ass.” Essentially, “she’s over-the-top fabulous.” While most housewives’ music careers are pretty much all in their own head, Erika has actually established quite a following and has had 8 number 1 dance hits on the Billboard charts.

All of the housewives head over to Lisa V’s house for Ken’s birthday lunch. As each guest arrives, they are given a unique, elegant hat to wear. In addition, former cast mate Taylor Armstrong makes a surprise appearance, as she tells Lisa that she is planning to move back into the neighborhood. Needless to say, Lisa is not all too thrilled to hear this. Camille also makes an appearance at the gathering.

While eating, the guests begin talking about Yolanda’s health situation. Taylor states that she doesn’t like following her on social media, as she doesn’t want to see the “needles going into her arm” all the time. Lisa Rinna tries to stick up for Yolanda and explains that she is simply trying to raise awareness for the disease. However, Taylor keeps digging a hole for herself, as she blabs on about Yolanda not going about the situation in the right way. All of the other guests are uncomfortable, as Taylor continues to trash Yolanda, even Lisa V admits, “Taylor has got a big mouth, and she gets stuck right in the middle of things.”

Since there was no big drama at the party, Kyle decides to spark a little action into the celebration and hops into Lisa’s pool. The white-dressed women all end up soaking wet, as they splash around in the pool. Even Ken joins in on the fun, as he, his new metal hips (he recently had surgery), and his super expensive shoes dives right in.

Watch next week’s episode of The Real Housewives of Beverly Hills on Tuesday, December 22 on Bravo.

We continue to discover the true Erika Jayne. Lisa V finds another present to give to Ken for his 70th birthday. Eileen seems to have some tension with her husband. Meanwhile, the housewives continue to conspire against Yolanda, as they try to figure out what really is going on with her health.