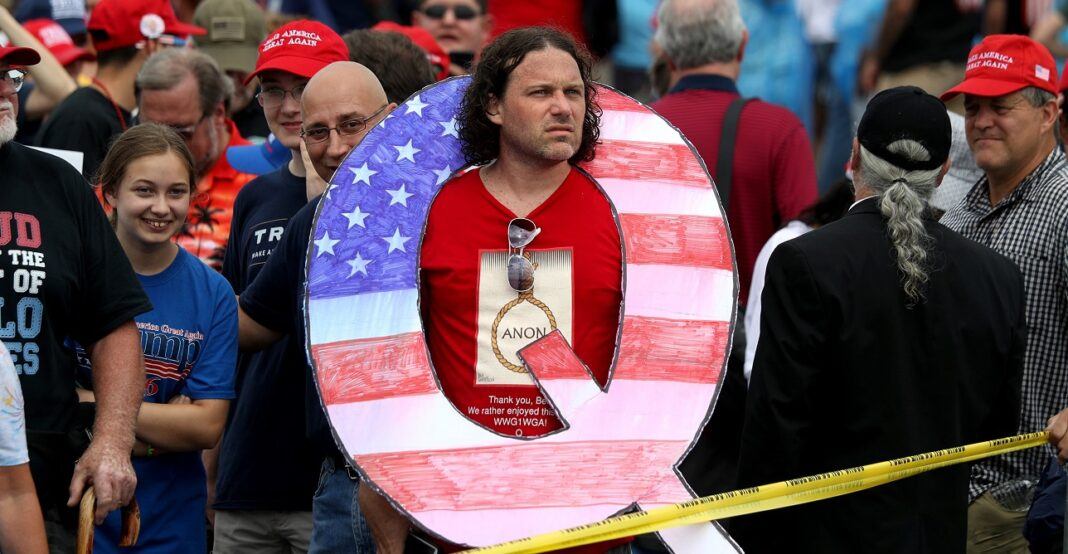 During his 2016 campaign, Donald Trump pretended not to know who David Duke was, and he’s tried the same with the group QAnon. The president actually took it a step further this time though.

Trump on Wednesday praised the supporters of QAnon, a convoluted, pro-Trump conspiracy theory, and suggested he appreciates their support of his candidacy. This has given the group more fuel to spread their beliefs which have put some in harm’s way. They have also been charged with domestic terrorism and planned kidnapping.

Speaking during a press conference at the White House, Trump courted the support of those who put stock in the conspiracy theory, saying, “I heard that these are people that love our country.” It was Trump’s first public comment on the subject and continued a pattern of president appearing unwilling to resoundingly condemn extremists who support his candidacy. “So I don’t know really anything about it other than they do supposedly like me.”

“QAnon conspiracy theorists spread disinformation and foster a climate of extremism and paranoia, which in some cases has led to violence. Condemning this movement should not be difficult,” said Jonathan A. Greenblatt, the chief executive of the Anti-Defamation League. “It’s downright dangerous when a leader not only refuses to do so, but also wonders whether what they are doing is ‘a good thing.’”

QAnon has ricocheted around the darker corners of the internet since late 2017, but has been creeping into mainstream politics more and more. The baseless theory centers on an alleged anonymous, high-ranking government official known as “Q” who shares information about an anti-Trump “deep state” often tied to satanism and child sex trafficking.

“QAnon is promoting political disinformation, medical disinformation and carrying on a legacy of anti-Semitic tropes,” Joan Donovan, the research director at the Shorenstein Center on Media, Politics and Public Policy, said in an interview. “Attention from the president is only going to embolden these groups to grow their ranks.”

Trump insisted he hadn’t heard much about the movement, “other than I understand they like me very much” and “it is gaining in popularity.”

Trump has retweeted QAnon-promoting accounts, and shirts and hats with QAnon symbols and slogans are not uncommon at his rallies.

Trump’s comments were condemned by the campaign of his Democratic rival, former Vice President Joe Biden.

“After calling neo-Nazis and white supremacists in Charlottesville ‘fine people’ and tear gassing peaceful protesters following the murder of George Floyd, Donald Trump just sought to legitimize a conspiracy theory that the FBI has identified as a domestic terrorism threat,” said Biden spokesman Andrew Bates. “Our country needs leadership that will bring us together more than ever to form a more perfect union. We have to win this battle for the soul of our nation.”

Former Florida Gov. Jeb Bush, who challenged Trump for the GOP nomination in 2016, also criticized the president, tweeting: “Why in the world would the President not kick Q’anon supporters’ butts? Nut jobs, rascists, haters have no place in either Party.”

Pressed on QAnon theories that Trump is allegedly saving the nation from a satanic cult of child sex traffickers, Trump claimed ignorance, but asked, “Is that supposed to be a bad thing?”

“If I can help save the world from problems, I’m willing to do it,” Trump said.

Qanon supporters were quick to celebrate Trump’s comments on social media, with many calling them a validation of their views. Many have long contended he sends them coded messages of support, and on Twitter, one user claimed Trump’s choice of a pink tie on Wednesday was another signal of support.

Within minutes, dozens of Instagram users began celebrating Trump’s acknowledgement of the conspiracy theory at the White House podium, uploading videos of him.

“Well we’ve been waiting for this moment for a while, to put it mildly thank you @realDonaldTrump,” one Instagram user wrote to her 19,000 followers in a post of Trump’s exchange. The video was viewed more than 1,000 times in just 30 minutes.

“Holy Smokin Q,” another tweeted. “Our President was asked 2 questions about the Qanon movement TODAY!! We LOVE you President Trump.”

On Parler, a right-wing platform popular with some Trump supporters, one Qanon supporter posted a photo of Trump and a bald eagle.

Trump’s comments came a week after he endorsed Marjorie Taylor Greene, who won her GOP House primary runoff in Georgia last week. Greene called the QAnon conspiracy theory “something worth listening to and paying attention to” and called Q a “patriot.” Trump praised her as a “

Trump has a long history of advancing false and sometimes racist conspiracies, including last week, when he gave credence to a highly criticized op-ed that questioned Democrat Kamala Harris’ eligibility to serve as vice president even though she was born in Oakland, California.

Asked about the matter, Trump told reporters he had “heard” rumors that Harris, a Black woman and U.S.-born citizen whose parents were immigrants, does not meet the requirement to serve in the White House. The president said he considered the rumors “very serious,” but later he and his campaign indicated they were not making an issue of the claim. Constitutional lawyers have dismissed it as nonsense.

Facebook announced just hours before Trump’s statements that it was banning some QAnon Facebook groups and accounts.

But social media had already been used for years to fuel the conspiracy theory’s rise, with private and super-secret Facebook groups where members sometimes post hundreds of times a day. QAnon believers often peddle a number of conspiracy theories, from claims that John F. Kennedy Jr. isn’t really dead and is staging a public comeback to baseless speculation around celebrities who have secretly been arrested for trafficking children for sex.

Mentions of hashtags social media users to promote the QAnon conspiracy theory have spiked in public Facebook pages and groups since July, generating millions of interactions, according to an Associated Press analysis of data from Facebook-owned CrowdTangle.

The conspiracy theory gained a larger online following in recent weeks, when prominent QAnon social media accounts pushed a bizarre and baseless conspiracy theory that online retail giant Wayfair was trafficking children through pricey storage cabinets that are for sale on its site. Some of the social media users shared the names and photos of missing children from around the country as proof of the scheme, even though many of the children have since been recovered.

QAnon’s origins are murky. In October 2017, a post appeared on the 4chan message board from an anonymous account calling itself “Q Clearance Patriot.” This poster, who became known simply as “Q,” claimed to be an intelligence officer with access to classified information about a war Mr. Trump was waging against the global cabal.

According to QAnon lore, Mr. Trump was recruited by top military generals to run for president in 2016 in order to break up the cabal’s criminal conspiracy, end its control of politics and the media, and bring its members to justice.

It has also incorporated elements of other conspiracy theories, including claims about the assassination of President John F. Kennedy, the existence of U.F.O.s and the 9/11 “truther” movement.

For years, Mr. Trump and his campaign have flirted with the QAnon movement. Kayleigh McEnany, the White House press secretary, has interviewed supporters in her role as a spokeswoman for the Trump campaign, creating footage that was later promoted to Mr. Trump’s supporters.“If you could say one thing to the president, what would you say?” Ms. McEnany said to a supporter outside a campaign rally in February as several attendees shouted, “Q!” The two talked about what it meant to be a “digital soldier” for Mr. Trump.

“Who is Q?” the man replied. Ms. McEnany said that she would pass the message along.

For his part, the president has often reposted QAnon-centric content into his Twitter feed. And QAnon followers have long interpreted messages from Dan Scavino, the White House director of social media, as promoting tongue-in-cheek symbols associated with the movement.

“I’m not surprised at all by his reaction, and I don’t think QAnon conspirators are surprised either. It’s terrifying,” Vanessa Bouché, an associate professor of political science at Texas Christian University, said in an interview. “In a democratic society, we make decisions based on information. And if people are believing these lies, then we’re in a very dangerous position.”

Last month, researchers at online misinformation firm NewsGuard found that the QAnon conspiracy theory is gaining traction in Europe, with Facebook users pushing it on Facebook and Twitter, too.