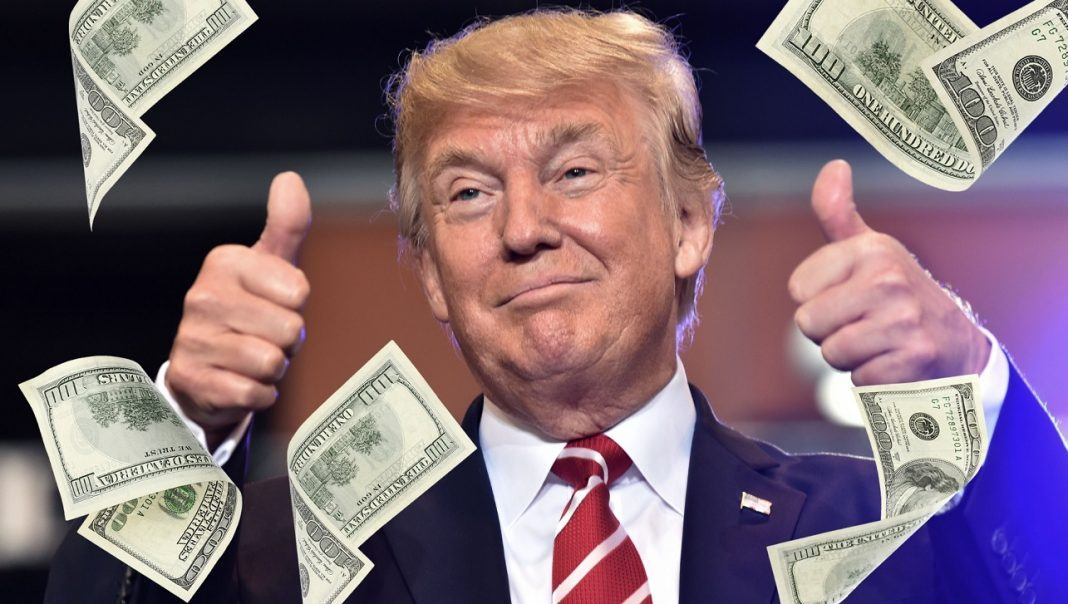 President Donald Trump continues declaring statistics that have no factual nature about the economy, Vladimir Putin, and Robert Mueller‘s Russia report. In a tweet, he declared that he’s had the most successful two years of any president while claiming that Democrats have stolen his past two years in office. He tried having it both ways, but here are the facts on his latest claims.

Trump repeatedly asserted that the U.S. economy is perhaps the best “ever” and insisted that last quarter’s gross domestic product was the highest in 14 years. Neither claim is true.

The president bragged the U.S. has more people working than ever before, skimming over the fact that the raw numbers are due to population increases.

The misstatements came as the “no-collusion” chorus also sang loudly this past week, led by Trump with Russian President Vladimir Putin chiming in. That gave rise to substantial misrepresentations of what the special counsel’s Russia investigation actually found.

In the Democratic presidential campaign, Joe Biden went beyond the facts on Trump’s tax cuts, claiming falsely that “all of it went to folks at the top.”

TRUMP: “We have more people working right now than ever in the history of our country.” — interview Thursday with Fox News.

THE FACTS: It’s true that more people are working now, but that is driven by population growth. A more relevant measure is the proportion of Americans with jobs, and that is still far below record highs.

According to Labor Department data, 60.6 percent of people in the United States 16 years and older were working in April. That’s below the all-time high of 64.7 percent in April 2000, though higher than the 59.9 percent when Trump was inaugurated in January 2017.

On Friday, the Labor Department reported that the unemployment rate dropped last month to 3.6% from 3.8%. That drop reflected a healthy economy for sure, but also an increase in the number of Americans who stopped looking for work.

TRUMP: “I think we have the best economy we’ve ever had.”— interview Thursday with Fox News.

TRUMP: “Fact is, every economic aspect of our Country is the best it has ever been!” — tweet on April 29.

THE FACTS: The economy is solid but not one of the best in history.

In the late 1990s, growth topped 4 percent for four straight years, a level it has not yet reached on an annual basis under Trump. Growth even reached 7.2 percent in 1984.

While the economy has shown strength, it grew 2.9% in 2018 – the same pace it reached in 2015 — and simply hasn’t hit historically high growth rates.

The economic expansion began under President Barack Obama in mid-2009.

THE FACTS: First-quarter growth of 3.2% in the gross domestic product is nowhere close to the best in 14 years, by any measure. It’s only the best since last year, surpassed in the second and third quarters with rates of 4.2% and 3.4% respectively.

Perhaps he meant to say it was the best first-quarter growth in 14 years. But that’s not right, either. It’s the best in four years.

The economy grew by 3.3% in the first quarter of 2015. So Obama has a better first-quarter record than Trump to date.

TRUMP: “Wages are rising fastest for the lowest-income Americans.” — Wisconsin rally on April 27.

THE FACTS: This is true, though he’s claiming credit for a trend that predates his presidency.

Some of the gains also reflect higher minimum wages passed at the state and local level; the Trump administration opposes an increase to the federal minimum wage.

With the unemployment rate at 3.6 %, the lowest since December 1969, employers are struggling to fill jobs. Despite all the talk of robots and automation, thousands of restaurants, warehouses, and retail stores still need workers.

They are offering higher wages and have pushed up pay for the lowest-paid one-quarter of workers more quickly than for everyone else since 2015. In March, the poorest 25% saw their paychecks increase 4.4% from a year earlier, compared with 3% for the richest one quarter.

BIDEN: “There’s a $2 trillion tax cut last year. Did you feel it? Did you get anything from it? Of course not. Of course not. All of it went to folks at the top and corporations that pay no taxes.” — Pittsburgh rally on April 29.

THE FACTS: Not true. While Trump’s tax cut did skew to the wealthy, most middle-income taxpayers saw a tax cut this year, according to the nonpartisan Tax Policy Center. The average taxpayer received a tax cut of about $1,600 in 2018, the center calculates, with two-thirds of U.S. taxpayers getting a cut and about 6 percent paying more.

PUTIN on special counsel Robert Mueller’s investigation: “A mountain gave birth to a mouse.” — remarks Tuesday, echoed in a phone call with Trump on Friday.

THE FACTS: Some might say this is a mouse that roared.

The investigation produced charges against nearly three dozen people, among them senior Trump campaign operatives and 25 Russians, as it shed light on a brazen Russian assault on the American political system.

The investigation did not establish a criminal conspiracy between the Trump campaign and Russia and it reached no conclusion on whether Trump obstructed justice. Yet it described his campaign as eager to exploit the release of hacked Democratic emails to hurt rival Hillary Clinton and it exposed lies by Trump aides aimed at covering up their Russia-related contacts.

The Russians caught up in the investigation were charged either with hacking into Democratic accounts or orchestrating a social media campaign to spread disinformation on the internet.

TRUMP on Democrats: “Are they looking for a redo because they hated seeing the strong NO COLLUSION conclusion? — tweet Sunday.

TRUMP: “The Mueller Report strongly stated that there was No Collusion with Russia (of course) and, in fact, they were rebuffed … at every turn in attempts to gain access.” — tweets Thursday.

ATTORNEY GENERAL WILLIAM BARR: “The evidence is now that the president was falsely accused of colluding with the Russians and accused of being treasonous. … Two years of his administration have been dominated by allegations that have now been proven false.” — Senate hearing Wednesday.

SEN. LINDSEY GRAHAM, R-S.C., chairman of the Senate Judiciary Committee: “Mr. Mueller and his team concluded there was no collusion.” — Senate hearing.

THE FACTS: This refrain about the Mueller report stating there was no collusion between Russia and the Trump campaign is wrong.

Trump’s assertion that his campaign denied all access to Russians is false. The Mueller report and other scrutiny revealed a multitude of meetings with Russians. Among them: Donald Trump Jr.’s meeting with a Russian lawyer who had promised dirt on Clinton.

On collusion, Mueller said he did not assess whether that occurred because it is not a legal term.

He looked into a potential criminal conspiracy between Russia and the Trump campaign and said the investigation did not collect sufficient evidence to establish criminal charges on that front.

Mueller noted some Trump campaign officials had declined to testify under the Fifth Amendment or had provided false or incomplete testimony, making it difficult to get a complete picture of what happened during the 2016 campaign. The special counsel wrote that he “cannot rule out the possibility” that unavailable information could have cast a different light on the investigation’s findings.

THE FACTS: It’s highly questionable to say Trump was fully cooperative in the Russia investigation.

Trump declined to sit for an interview with Mueller’s team, gave written answers that investigators described as “inadequate” and “incomplete,” said more than 30 times that he could not remember something he was asked about in writing, and — according to the report — tried to get aides to fire Mueller or otherwise shut or limit the inquiry.

In the end, the Mueller report found no criminal conspiracy between the Trump campaign and Russia but left open the question of whether Trump obstructed justice.

GRAHAM: “As to obstruction of justice, Mr. Mueller left it to Mr. Barr to decide after two years, and all this time. He said, ‘Mr. Barr, you decide.’ Mr. Barr did.” — Senate hearing.

THE FACTS: Not true. Mueller did not ask Barr to rule on whether Trump’s efforts to undermine the special counsel’s Russia investigation had obstructed justice.

According to the report, Mueller’s team declined to make a prosecutorial judgment on whether to charge partly because of a Justice Department legal opinion that said sitting presidents shouldn’t be indicted.

As a result, the report factually laid out instances in which Trump might have obstructed justice, specifically leaving it open for Congress to take up the matter or for prosecutors to do so once Trump leaves office.

Barr wrote in a March 24 letter that he ultimately decided, as attorney general, that the evidence developed by Mueller was “not sufficient” to establish, for the purposes of prosecution, that Trump committed obstruction of justice.

Barr subsequently acknowledged that he had not talked directly to Mueller about making that ruling and did not know whether Mueller agreed with him.

TRUMP says Putin “is not looking at all to get involved in Venezuela, other than he’d like to see something positive happen for Venezuela.” — remarks to reporters Friday after speaking with Putin on the phone.

Russia has a political, military and economic alliance with Venezuela over many years and is helping to support Maduro’s hold on power.

The Russians have provided Venezuela with substantial assistance, including an air defense system and help circumventing U.S. sanctions on its oil industry.

“Russia is now so deeply invested in the Maduro regime that the only realistic option is to double down,” said Alexander Gabuev of the Carnegie Moscow Center.

TRUMP: “We’re getting ripped off on military, NATO. I’m all for NATO. But you know, we’re paying for almost 100 percent of defending Europe.” — Wisconsin rally on April 27.

THE FACTS: The U.S. is not paying “almost 100 percent” the cost of defending Europe.

NATO does have a shared budget to which each member makes contributions based on the size of its economy. The United States, with the biggest economy, pays the biggest share, about 22 percent.

Defending Europe involves far more than that fund. The primary cost of doing so would come from each member country’s military budget, as the alliance operates under a mutual defense treaty.

The U.S. is the largest military spender but others in the alliance obviously have armed forces, too. The notion that almost all costs would fall to the U.S. is false.

In fact, NATO’s Article 5, calling for allies to act if one is attacked, has only been invoked once, and it was on behalf of the U.S., after the attacks of Sept. 11, 2001.