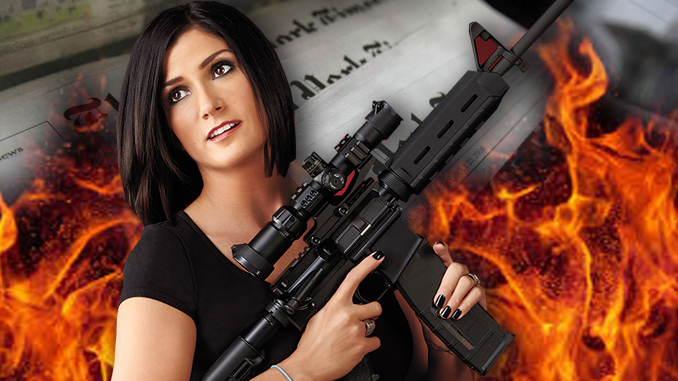 As America continues being divided by Donald Trump, the NRA is quickly taking advantage to stir thing up more with their latest series of #counterresistance and #clenchedfistoftruth ads.

The election of President Donald Trump and Republican control of Congress meant the National Rifle Association could probably rest easy that gun laws wouldn’t change for at least four years. But the NRA has begun a campaign not against pending legislation, but what it sees as liberal forces bent on undoing the progress it’s made – and the political powerhouse is resorting to language that some believe could incite violence.

Using the hashtags #counterresistance and #clenchedfistoftruth, the NRA has put out a series of videos that announce a “shot across the bow,” and say the gun-rights group is “coming for you” and that “elites … threaten our very survival,” terms that suggest opponents are enemy combatants.

“The times are burning, and the media elites have been caught holding the match,” NRA spokeswoman Dana Loesch says in one video aired on NRATV, the gun lobby’s web video site, as it shows footage of people fighting police, breaking storefront glass and burning the American flag.

Later, she specifically calls out The New York Times: “We’ve had it with your narratives, your propaganda, your fake news. We’ve had it with your constant protection of your Democrat overlords, your refusal to acknowledge any truth that upsets the fragile construct that you believe is real life. And we’ve had it with your tone-deaf assertion that you are in any way truth or fact-based journalism,” Loesch says. “Consider this the shot across your proverbial bow. … In short? We’re coming for you.”

Kathleen Hall Jamieson, the director of the Annenberg Public Policy Center at the University of Pennsylvania, said the tone and language is “overwrought rhetoric” that, viewed by the wrong person, could lead to violence. The kicker on one of the videos – “We’re coming for you” – is straight out of the movies, she said, and “that phrase means that violence is imminent and we will perpetrate it.”

The NRA is taking a page from the Trump playbook.

The friction between the gun lobby and the media isn’t new. But critics of the NRA contend the organization is relying on the “fake news” mantra started by Trump to whip up its followers after a dip in gun sales that has taken place since Trump succeeded President Barack Obama, who favored stricter gun-control laws.

“They’re not inventing this hyperangry, nasty partisan tone but piggybacking on Trump’s approach. Of course, NRA voters, by and large, are Trump voters, so they would be sympathetic to that kind of message,” said Robert Spitzer, chairman of the political science department at the State University of New York at Cortland, who has examined the firearms industry and Second Amendment issues extensively.

Spitzer, a member of the NRA as well as the Brady Center to Prevent Gun Violence, said it’s a pattern the NRA has exhibited as the group evolved from an almost exclusive focus on gun safety into a political beacon for conservatives who fear changes to the Second Amendment and the gun industry.

“It was Bill Clinton in the 1990s. In the early 2000s, it was John McCain. It was Hillary Clinton. It was the United Nations. They’ve held up the U.N. as ready to swoop in and take everybody’s guns,” Spitzer said. “The focus of their ire has changed, but the basic message has been the same.”

The NRA declined to comment on the videos to media outlets. But the NRA has produced videos saying the left and the media are out of control and feeding a false narrative that tea party conservatives are racists and Trump supporters are “toothless hillbillies.”

Wayne LaPierre, executive vice president of the NRA, said this month: “There is no longer any difference between our politicians and the elite media who report on them. … These elites threaten our very survival, and to them we say: We don’t trust you, we don’t fear you, and we don’t need you. Take your hands off our future.”

Erich Pratt, executive director of Gun Owners of America, said it’s been a longtime frustration with journalists who, he contends, “ignore the violence and harsh rhetoric on the left while magnifying and twisting the words of those on the right.”

The NRA videos prompted Mike Nelson, a Democratic congressional candidate in Arkansas and self-described hunter and gun-rights supporter, to label them as “hate speech.” Nelson, whose website lists the NRA among more than two dozen organization he’s supported, said he can no longer back the NRA.

In a Facebook post, Nelson wrote: “If the NRA does not stop their hate campaign, I will call them out on sedition. Sedition is the willful undermining of the legal authority, the Incitement of Violence.”

Some gun owners have cheered the videos and said they give voice to conservatives weary of media attacks on Trump; others say the videos stray from the NRA’s original mission and that the NRA is inviting violence.

Joe Plenzler, a Marine veteran who served overseas and sometimes had reporters accompanying his unit, joined two other veterans in writing an opinion piece for The Daily Beast criticizing the videos.

“The NRA props up the Second Amendment by undermining and vilifying the protections afforded in the First, and paints everyone who may disagree with the current administration, our country’s justice system, or the NRA’s partisan political position with a very dark and unjust broad brush,” Plenzler wrote with Marine veterans Craig Tucker and Kyleanne Hunter.

Plenzler, who has since dropped his NRA membership, said he was disturbed by the videos.

“Lately, it seems like they’ve gone well out of the bounds of any sort of sane responsible behavior. If you want to advocate for the Second Amendment, which I unapologetically believe in, that’s fine,” he said. “But I think at the point where you are going to demonize half the American population in a recruitment effort to get more members, I’ve got a big problem with that.”