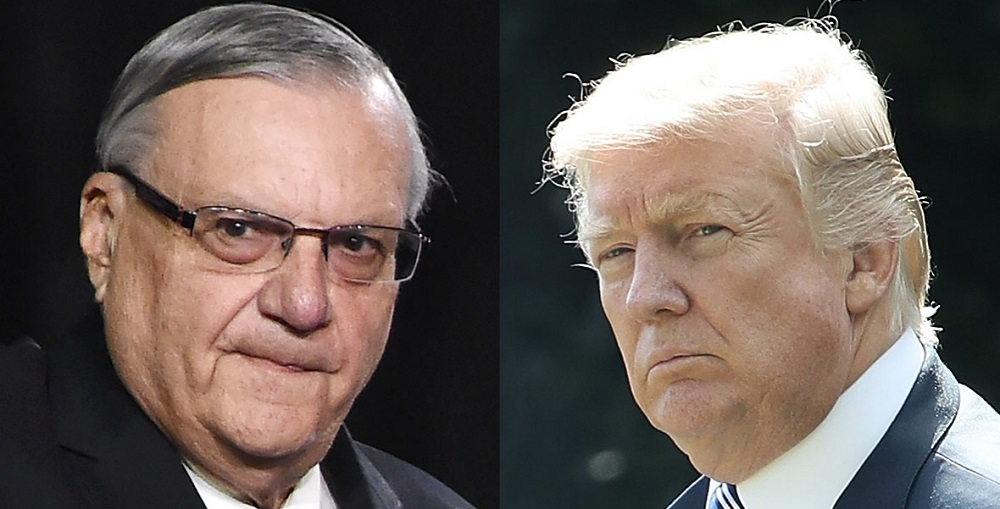 American’s knew that Donald Trump would be using his unlimited pardon power soon as the Russia investigation closes in on both him and his family. He began testing it out during a hectic Friday while Hurrican Harvey came looming at the Texas Gulf Coast with Joe Arpaio.

Many are figuring out quickly that this pardon is a signal to others that are under heavy FBI scrutiny for the Russia investigation that they could be saved with a simple flourish of his pen. But it isn’t so simple for Trump as once the person accepts his pardon, they cannot use the old “I take the 5th” when questioned, plus they also can still get in trouble if they perjure themselves.

This is a double edged sword for the President as this could lead to those people he pardoned telling things he wants to be kept quiet. While he may want to be rather liberal with his pardon power, it could wind up hurting him. 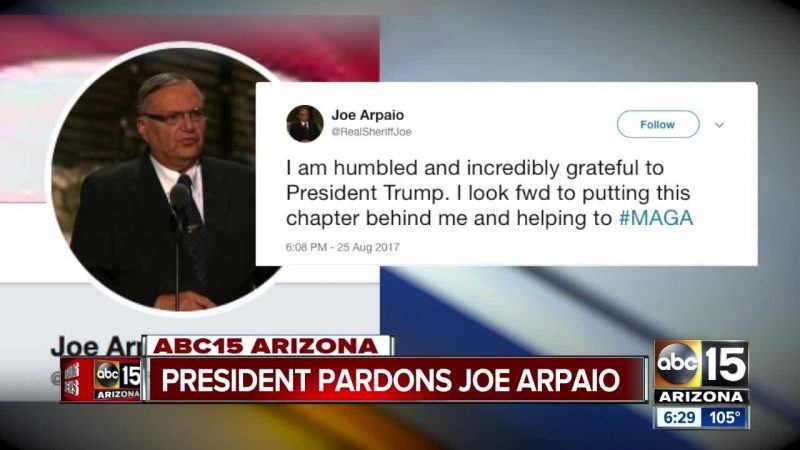 President Donald Trump spared former Arizona Sheriff Joe Arpaio the prospect of serving jail time in granting the first pardon of his turbulent tenure, wiping away the lawman’s recent federal conviction stemming from his immigration patrols that focused on Latinos.

The White House said 85-year-old Arpaio was a “worthy candidate” for the pardon, citing his “life’s work of protecting the public from the scourges of crime and illegal immigration.” Trump granted the pardon less than a month after a judge found Arpaio guilty of a misdemeanor contempt-of-court charge in a trial that was prosecuted by the president’s own Justice Department.

“I appreciate what the president did,” Arpaio told media outlets as he celebrated the news over an Italian restaurant meal and someone in his party ordered champagne. “I have to put it out there: Pardon, no pardon – I’ll be with him as long as he’s president.”

The pardon drew a swift and harsh denunciation from an array of Latinos and political leaders, who said it amounted to presidential approval of racism by eliminating the conviction of a law officer who the courts said had used immigration patrols to racially profile Latinos. And it overturned what critics saw as a long-awaited comeuppance for a lawman who long escaped accountability for his use of headline-grabbing tactics as sheriff in Phoenix.

“Pardoning Joe Arpaio is a slap in the face to the people of Maricopa County, especially the Latino community and those he victimized as he systematically and illegally violated their civil rights,” Phoenix Mayor Greg Stanton said.

The White House announced the pardon late Friday as a powerful Category 4 hurricane threatened Texas with severe flooding and on the same day Trump fleshed out the details of his ban on transgender individuals serving in the military, another move that will cheer his conservative base. The decision followed the uproar that ensued after Trump assigned blame to “both sides” participating in race-fueled clashes in Charlottesville, Virginia, this month.

Trump has been plagued by poor job approval ratings, currently at 34 percent, the lowest mark ever for a president in his first year.

His decision on the former sheriff may also serve to energize supporters dispirited by the president’s dismissal a week ago of chief strategist Steve Bannon, a favorite on the far right wing of the Republican Party.

GOP leaders were mixed in reacting to the pardon. Sen. John McCain criticized the move and said it undermines Trump’s “claim for the respect of law as Mr. Arpaio has shown no remorse for his actions.” Republican Gov. Doug Ducey said Arpaio should be given credit for his crime-fighting efforts and allowed to “move on” and enjoy his retirement.

Arpaio earned a national reputation by taking aggressive action to arrest immigrants in the country illegally. But years of legal issues and related costs took a toll on his political power at home, and he was handily defeated by a Democrat in the 2016 election.

The loss coincided with Trump’s election, based in large part on his anti-immigrant rhetoric. Arpaio campaigned for him around the country and spoke at the Republican National Convention.

Arpaio defied court orders that he stop the patrols and has been pardoned by a president who has shown lack of respect for judges with whom he disagrees. Trump has had harsh words about judges overseeing the case against his now-defunct Trump University and his travel ban.

“So Sheriff Joe was convicted for doing his job?” Trump asked supporters at Tuesday’s rally. “I’ll make a prediction. I think he’s going to be just fine, OK.”

Trump issued the pardon seven months after taking office, though it is not unprecedented for a president to issue a pardon in their first year in office.

Asked whether Trump sought a recommendation from the Justice Department’s pardon attorney or the deputy attorney general, White House press secretary Sarah Huckabee Sanders said Thursday: “I would imagine they go through the thorough and standard process.”

It is not unheard of for a president to exercise his broad power to grant pardons without formal input from the Justice Department, particularly when it involves an associate or a friend. President Bill Clinton ignited a major controversy on his final day in office with a last-minute pardon for fugitive financier Marc Rich, the ex-husband of a major Democratic fundraiser.

Former President George W. Bush set off a political backlash over his decision to commute the prison sentence of I. Lewis “Scooter” Libby on a perjury and obstruction of justice case that stemmed from a CIA leak. And Gerald Ford pardoned Richard Nixon for his involvement in the Watergate scandal just days after taking over for his predecessor.

Critics say the Arpaio pardon removed the last opportunity to hold the lawman accountable for what they say is a long history of misconduct, including a 2013 civil verdict in which the sheriff’s officers were found to have racially profiled Latinos in his immigration patrols.

Arpaio was accused of prolonging the patrols for 17 months after a judge had ordered them stopped so that he could promote his immigration enforcement efforts in a bid to boost his successful 2012 re-election campaign.

Arpaio acknowledged extending the patrols but insisted it wasn’t intentional. He blamed a former attorney for not properly explaining the importance of the court order and brushing off the conviction as a “petty crime.”

He accused then-President Barack Obama of trying to influence the 2016 sheriff’s race by announcing in court weeks before Election Day that it was willing to prosecute Arpaio. Prosecutors never filed criminal charges. They were instead recommended by the judge who presided over the profiling case, which began in the Bush administration. The judge in the profiling case was a Bush appointee as well.

Lawyers in Trump’s Justice Department prosecuted the case during a five-day trial this summer, and the judge handed down the conviction last month. Arpaio said he’ll discuss the case in more detail next week. He said he’ll remain involved in the political scene now that he’s no longer facing jail time.