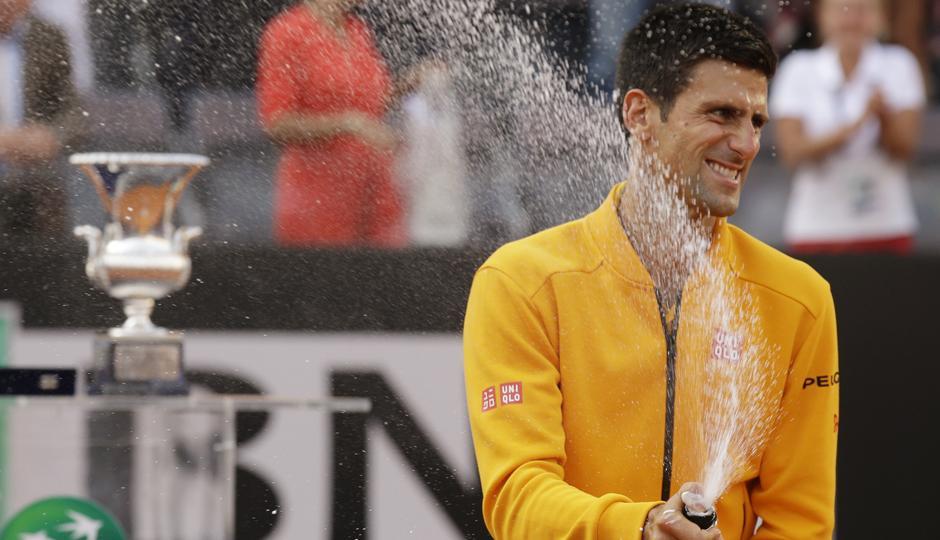 Number one ranked Novak Djokovic secured his spot even further in the Emirates ATP Race To London after defeating number two ranked Roger Federer Sunday at the 2015 Rome Open 6-4, 6-3, winning that title for the fourth time. This only set him further into his spot well ahead of Federer and Andy Murray .

Djokovic now leads his nearest rival, Andy Murray, by 2,625 Emirates ATP Rankings points in his quest to qualify for a ninth time to the Barclays ATP World Tour Finals, where he is a four-time defending champion.

While celebrating his win, Djokovic nearly got a black eye from the champagne cork that came quickly shooting out of the bottle just missing it while giving him a little bit of champagne froth just outside his eye.

The Swiss, defeated 6-4, 6-3 by the Serb champ on Sunday, remains second ahead of Scot Andy Murray.

Rafael Nadal, knocked out in the quarter-finals in Rome, sits on seventh just behind Canadian Milos Raonic, who dropped two places.

As a result Tomas Berdych of Czech Republic and Kei Nishikori of Japan moved up to fourth and fifth place respectively. The updated rankings for May 18, 2015 are below.

The Serbian, who will celebrate his 28th birthday on 22 May, has captured five tour-level trophies this season, including theAustralian Open (d. Murray), the BNP Paribas Open in Indian Wells (d. Federer), the Miami Open presented by Itau (d. Murray), theMonte-Carlo Rolex Masters (d. Berdych) and Rome.

Tomas Berdych, who is currently in third position, has been remarkably consistent in 2015 reaching the quarter-finals or better of all nine tournaments he had played. He is 730 points behind Murray.

David Ferrer has risen one spot to No. 5, as a result of his run to the Rome semi-finals (l. to Djokovic). He leads No. 6-ranked Roger Federer, who lost to Djokovic in the final at the Foro Italico, by 90 points.

Federer, the most successful player in tournament history, with a 48-11 record and six titles, is seeking to return to the season finale for a record 14th consecutive year.

Barcelona Open Banc Sabadell winner Kei Nishikori drops two spots to No. 6, but has a 190-point lead over No. 7-ranked Rafael Nadal (2,200 points). Nadal heads into the second Grand Slam championship of the year at Roland Garros – where he is a nine-time titlist – without a European clay-court title for the first time in 10 years.

Stan Wawrinka rounds out the Top 8 in the Emirates ATP Race To London, with 2,185 points to trail Nadal by 15 points. Milos Raonic, who is currently outside the automatic qualifying spots, is No. 9 with 1,540 points and is 465 points clear of No. 10-placed Gael Monfils.