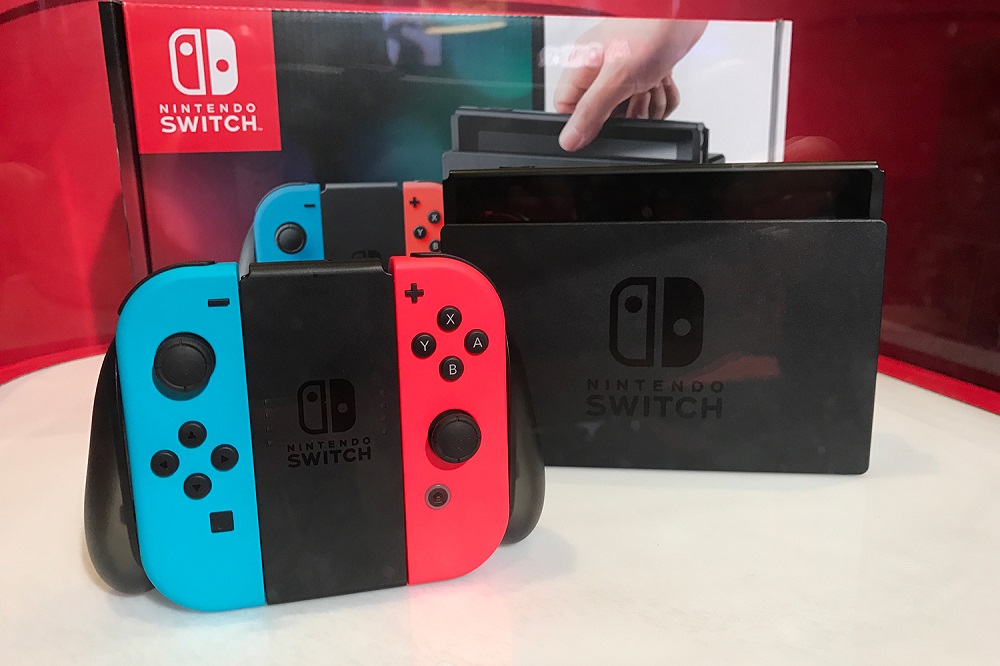 Nintendo certainly has had a banner year with Pokemon Go, so anticipation has been very high for their Nintendo Switch which hits on Friday. You can check out pricing on it here and be ready to get your own. You might want to read our review first though.

The idea behind it is perfect. An all-in-one gaming machine that serves as both a handheld device and a TV game console. Nintendo pretty much imprinted us with the idea when Game Boy came out that your portable devices would always be separate from your Nintendo home console. Even the games were different. If you wanted to play the same game on your portable and home console, you had to buy the same game that was made for each one.

There was no crossover, until now.

The Nintendo Switch bridges this huge gap which is very exciting.

Basically, it’s a mini table that comes with a 6.2-inch screen that you could use to play games. The only problem there is that they don’t have any games that would play on a touchscreen. 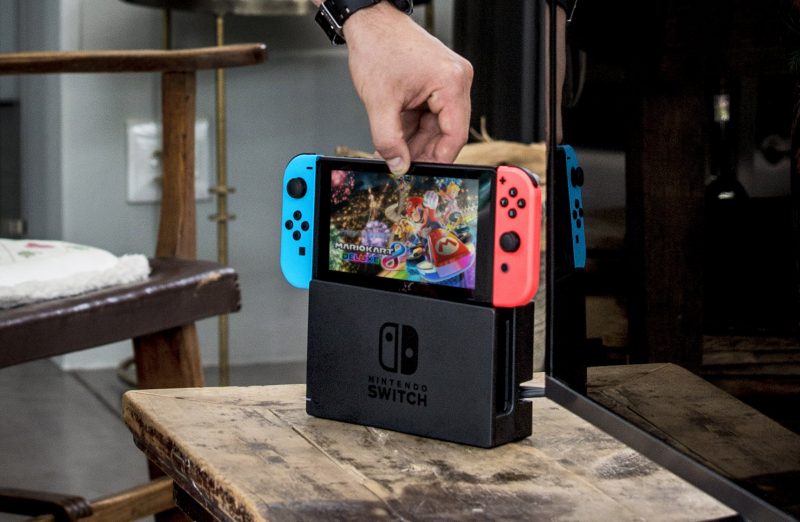 They have added two small game controllers (called Joy-Cons) that slide into the sides of the tablet. That grooves on the side are very easy to slide into so no worry about having to jam them in with frustration. This simple act turns the Nintendo Switch into a fully-functional while still traditional gaming machine. Plus it has those great controllers serving as joysticks. 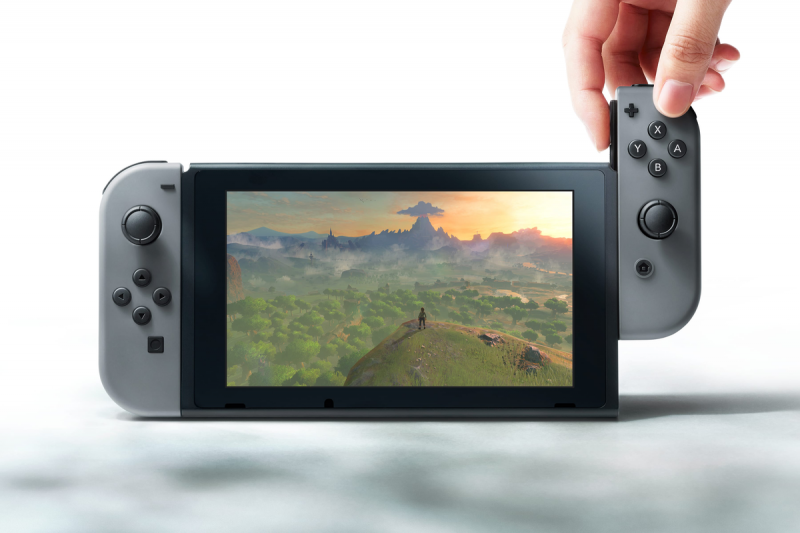 A small plastic dock let you connect everything to your tv through HDMI. So all you do is stick your Nintendo Switch into the dock, and it’s all on your television screen. You pop (er slide) the controllers off, and they are wireless play toys letting you relax on the couch and have some fun.

That tablet comes with a little kickstand so you can treat it like a real tablet and prop it up on a table while you work the controllers in your hands. 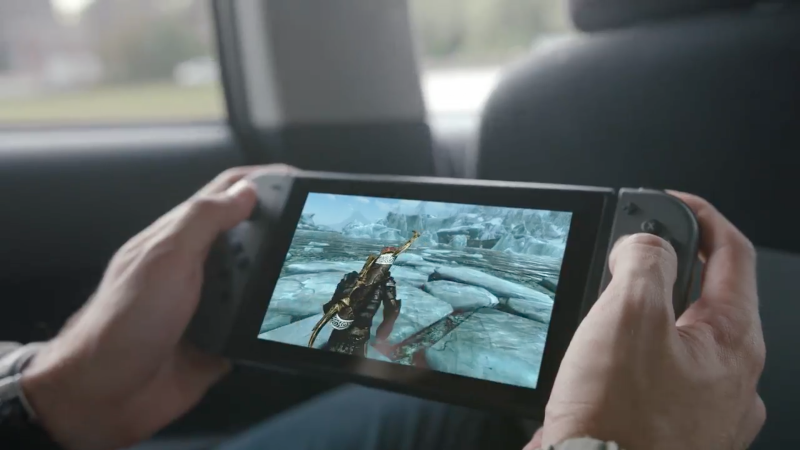 Well, then we run into a frustrating problem. The Switch doesn’t always make for such an easy switch. The device plays fine in handheld most, but we kept having sync issues with the left half of the Joy-Con. It has a very annoying lag, so when you hit the button, it takes a moment to register on your tv screen. Sometimes it just drops the connection.

We noticed that many times after taking it out on the road and coming back to the office to play would require a hard reset. Another annoying thing as who wants to have to reset your console like that. The idea behind the Nintendo Switch is to be able to play on the road, come home and ‘switch’ seamlessly over.

Like a designer having a bad week on “Project Runway,” these seams are showing.

This was one of my big frustrations when Guitar Hero Live hit as those dongles did something similar.

Nintendo has made an answer for this. You can purchase the optional “Pro Controller” for $70 and problem solved. I can only hope that Nintendo has addressed this issue and it will be fixed in the consoles that hit on Friday. Otherwise, there going to hear a lot of grumbling all weekend long.

There are a couple of other things the Switch can’t do. You can’t charge the Joy-Cons while playing in TV mode. You’ll need to buy a separate Charging Grip ($30) for that. And since the USB-C power outlet is on the bottom of the tablet, you can’t play it in the “kickstand” configuration while it’s plugged in—the cord gets in the way. Switch includes one AC adapter, but this has to be used both by the dock and while on the go. So if you want to set the dock up in your entertainment center and run the plug behind the cabinet and never touch it again, you’ll probably want a second adapter ($30).

If you’re hoping to hook up the Nintendo Switch to another tv in your home, you have to put out $90 for another dock. Then you’re able to just pop the Switch into either dock so you can play on another television.

So you can see where this is heading. Like with so many gaming systems, you get that initial price to pay, then there are all those optional features you wind up getting. So that $300 turns into $500 rather quickly.

When you’re putting out $300 for a gaming system, you expect it to work perfectly out of the box, but even Sony has learned that hard lesson when buyers strike back online.

Our fruther fleshed out review continues on dealing with the lack of games for the Switch.

When you’re deep in a video game, the last thing you want to do is leave home. If only you could take the game with you for your commute to work or your bus ride to school, or to liven up your lunch hour.

Nintendo’s new Switch console tries to address that by letting you play it anywhere. You simply yank the Switch out of its docking station. It functions as a tablet with a built-in display, so you don’t have to worry about finding a TV. Games typically work without a persistent internet connection. Once you’re back home, just slide it back into the docking station to play games on a big-screen TV.

The Switch works like a traditional game console when you want that; it offers portability when you need that. Over the past week, I’ve played the new “Legend of Zelda” game at home, outside, in a laundromat and in a mechanic’s waiting room. The game picks right up wherever I left off.

The big question, as it so often is with Nintendo, is whether it will be able to deliver enough games. When the console starts selling Friday, for $300, the Switch will have a paltry nine titles, leaning heavily toward familiar franchises such as “Just Dance” and “Skylanders.” By contrast, Sony’s PlayStation 4 and Microsoft‘s Xbox One had about 20 games each at launch.

A new hardware introduction is big for any company, and even more so for a company in such a state of transition. Nintendo’s Wii U console bombed when it came out in 2012, and its long-held dominance of the portable game market has been usurped by smartphones and tablets. Its two big successes of 2016 – “Pokemon Go” and “Super Mario Run” – were made to be played on other companies’ devices. “Pokemon Go” wasn’t even developed in-house, but under license by a California company called Niantic.

The Switch is a gutsy attempt by Nintendo to reclaim its territory in both the home and portable markets.

The console comes with two controllers, known as Joy-Cons. Each has a control stick, four buttons, two triggers, motion sensors and haptic feedback. The right one also has an infrared sensor to detect nearby objects.

On the go, you can turn the tablet into a hand-held game machine by attaching Joy-Cons to each side. Or just prop the tablet on a table with a built-in kickstand and use the Joy-Cons as wireless controllers, just as you would at home. You can also transform the Joy-Cons into a more traditional game controller by sliding them into a wireless grip accessory, which is included.

To play a solo adventure like “Zelda,” you’ll need all the buttons on both Joy-Cons. But Nintendo also wants you to play socially, so each Joy-Con functions as a freestanding controller for party games like “Just Dance 2017” and “Super Bomberman R.”

The Joy-Cons are surprisingly comfortable given that they are small, about the size of a candy bar. I’d be more worried about losing them than getting hand cramps. They slide into slots on the tablet and the grip with a satisfying snap. 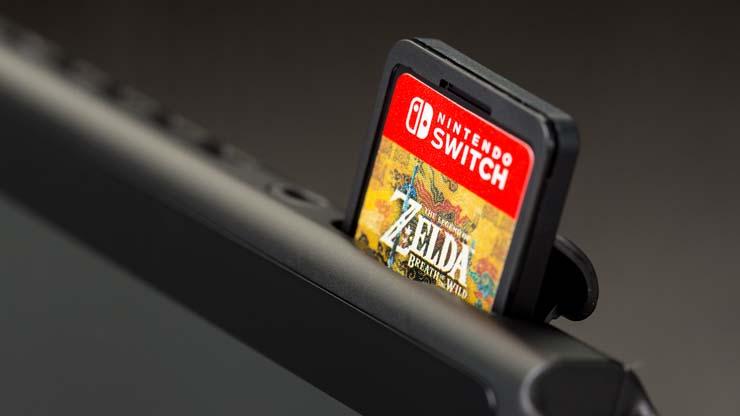 The tablet, with the Joy-Cons attached, is about as wide as a standard iPad held horizontally, but just a little more than half as tall. The screen resolution is equivalent to 720p high definition. “Zelda” looks just about as good here as on your big-screen HDTV. The battery lasts about six hours, though a power-hungry game like “Zelda” could cut that down in half.

The Switch has a puny 32 gigabytes of internal storage. You’ll need to buy a memory card if you intend to download plenty of games. Games also come on postage-stamp-sized game cards you slide into a slot on top.

It remains to be seen just how many games you’ll want. There’s a drab collection of multiplayer mini-games, packaged as “1-2-Switch.” The package would have been great as a free starter kit; instead, it costs $60. “Snipperclips,” for just $20, is a more inspired cooperative puzzle game. The marquee attraction, of course, is “The Legend of Zelda: Breath of the Wild” ($60). It is spectacular, but also available on the Wii U, so owners of that console don’t need to upgrade yet.

Granted, I am a hardcore gamer, the type of guy who would buy a Switch just for “Zelda” and spend 100 hours happily wallowing in it. Casual gamers who get by with the occasional fix of “Candy Crush Saga” on cellphones will probably wish for a broader selection.

Nintendo says more than 80 games are in development, with homegrown franchise titles like “Super Mario Odyssey,” ”Mario Kart 8 Deluxe” and “Splatoon 2” coming this year. But Nintendo hasn’t said whether the Switch will get some version of its Virtual Console, which delivered classic hits from the company’s 30-plus-year history to the Wii U.

The Switch hardware is very impressive, and the ability to easily take a game from the living room to the laundromat scratches an itch I didn’t know I had.

But in bridging two worlds, it sacrifices important pieces of both. It doesn’t have all the functions you want from a tablet; even the Xbox and the PlayStation have web browsers and video apps such as Netflix on their non-portable systems. And the Switch doesn’t (yet) deliver the range of games you want from a home console.

The Wii U failed, in part, because Nintendo left too many of its most beloved heroes idling on the bench. Consoles gathered dust because there weren’t enough compelling games to play.

The long-awaited “Zelda” is a good start for the Switch, but Nintendo will need to deliver this kind of quality more consistently. Again, hopefully Nintendo has dealt with the lag issue on their Switch so you can enjoy it fully.