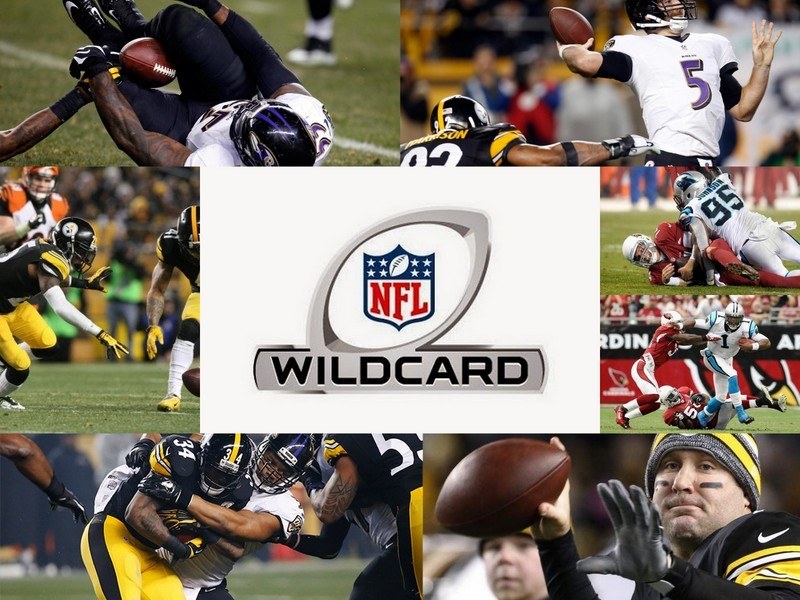 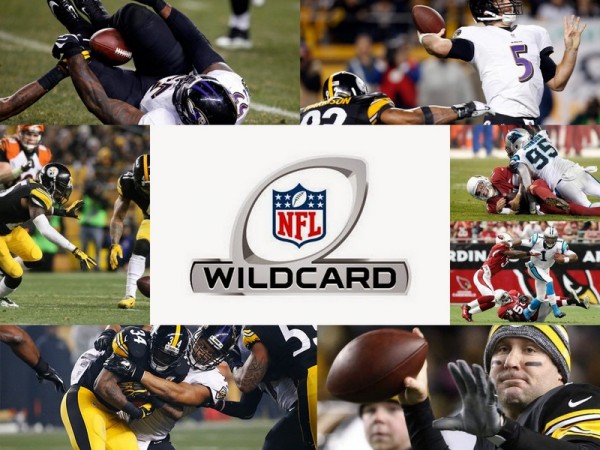 The Wild Card Weekend got the playoffs rolling with a couple of Saturday games then wrapped up with two more on Sunday. While only one of the four games was a close contest in the end, there were still enough story lines to go around. Here is the weekend that was round one of the NFL playoffs. 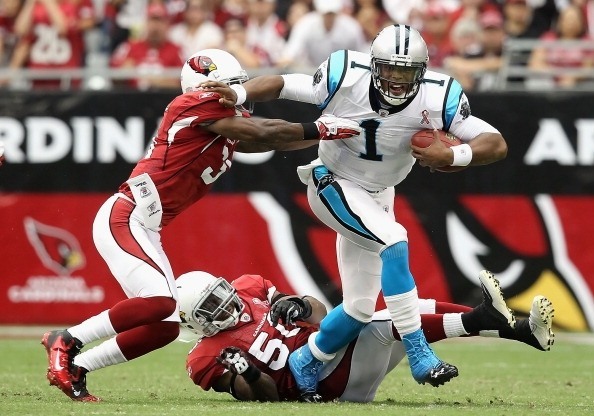 The Cardinals came into this playoff game fearing the worst when it came to their QB. That fear was realized as Ryan Lindley was a nervous wreck throughout the game despite his offensive line giving him plenty of time to throw. I’m sure Lindley is a nice guy….or an axe murderer for all I know, but he is no NFL QB. The Panthers were the only team with any offense to speak of on this day and it showed. 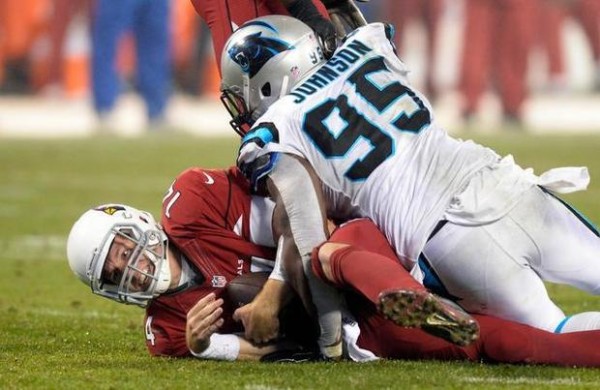 Carolina went ahead early for a ten point lead and looked like they would walk away with it easily. But the Cardinals got a break when they recovered a Panthers fumble on a punt return. The kicking game was a huge factor in this contest. Larry Fitzgerald bailed his unsteady quarterback out on the ensuing drive and set up a TD pass from Lindley to the Cardinals’ big tight end. That made it 10-7 Panthers and it stayed that way after the Panthers missed a field goal on their next drive.

Lindley was having a hard enough time on his own without his punter Drew Butler giving Carolina great field position each time his foot met the ball. Butler was a hell of a punter at Georgia, but embarrassed himself, his family name, and Athens GA in this playoff game. Old Cam Newton gave the Cardinals another breath of life late in the second quarter though, as he tossed an ugly pick that lead to an Arizona touchdown. 14-13, the Cards somehow lead at the half.

The third quarter saw Cecil’s boy run for a first down on 3rd and 12 to get his offense fired up. Cam later hit Fozzy Whittaker on a screen pass that went for 39 yards and a score to make it 20-14 and Carolina gained a death grip on this game. On the ensuing kickoff Ted Ginn JR carelessly fumbled the ball deep in Cardinals territory as the Panthers recovered. Newton and company had little trouble turning this turnover into seven points. Again, the kicking game was maybe the main factor in this game. 27-14 Panthers at this point and the game was basically over.

Arizona did get a fumble recovery to set them up deep on the Panthers’ side of the field, but Lindley promptly threw a pick to end any hopes of a comeback. The litany of flags in the fourth quarter made the end of this game almost unwatchable. That and the fact that only one team was equipped with a quarterback. The final was 27-16 after Carolina took a safety to run the clock down in the final few seconds.

Pittsburgh had the advantage of the home field, but they would have been better off if they had Le’Veon Bell instead. That would have been a trade that Mike Tomlin would take any day. The Ravens had all the defense necessary to hold the powerful Steelers offense in check with their most effective weapon on the sideline.

The Steelers started out well enough, getting an early field goal to go ahead 3-0. They enlisted the services of Ben Tate to help take up the slack left by Bell’s absence. Surprisingly, Tate fit in very well at the start despite only being with the team just a few days. 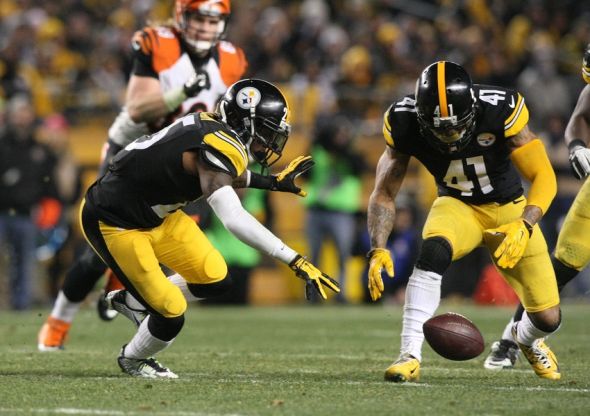 Baltimore got the ball and made a statement with a nice drive of their own. Justin Forsett lead the way on this drive and the entire game. Pierce got the touchdown to make it 7-3 Ravens. Forsett has been a nice story for Baltimore this year after Ray Rice was sent packing. The journeyman has made the most of his opportunity with the Ravens.

It appeared that Pittsburgh would retake the lead rather quickly when Big Ben hit Antonio Brown in the corner of the end zone. But Brown couldn’t keep both feet in and Pittsburgh had to settle for another field goal. 7-6 Ravens. 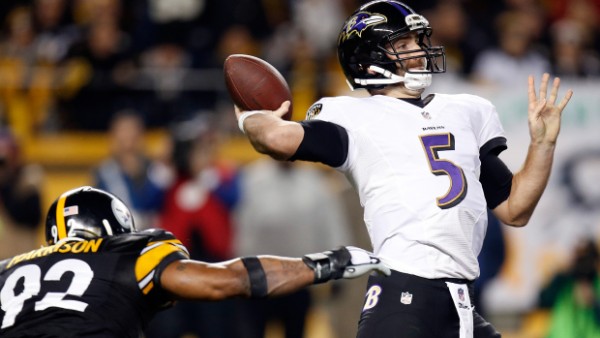 Joe Flacco had a very good game especially in light of the fact that James Harrison was playing like a man possessed. Harrison pressured Flacco all game long, but to the quarterback’s credit he stayed a half a second ahead of the QB killer.

The first half was mostly a battle of field goals between the two bitter rivals. Finally as Steve Smith started to heat up, the Ravens began to pull away from the Steelers with a touchdown throw from Flacco to Torrey Smith to make it 20-9 Ravens.

Down 11 points and without Le’Veon Bell, Pittsburgh was in deep trouble. They did get a break when Justin Forsett coughed up the ball in the fourth quarter. Roethlisberger took advantage, hitting Antonio Brown for a 49 yard score only to have it reviewed and the TD reversed. Two plays later the Steelers got a score that stuck on a pass from Big Ben to Martavis Bryant. With a failed two point conversion, the score was 20-15 Ravens.

Baltimore had a long drive next to eat some clock and just missed on a long throw to the end zone on third and one. They took a 52 yard FG to increase their lead to 23-15. 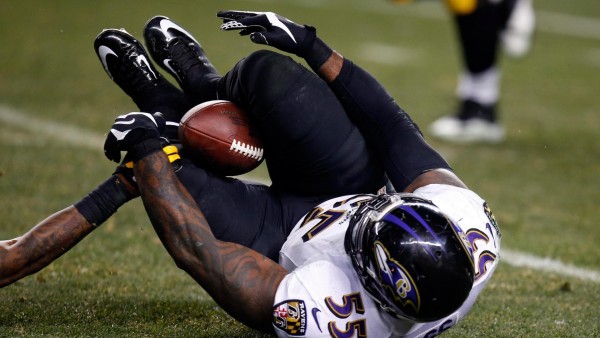 Terrell Suggs made one of the best plays of the weekend when he picked off Roethlisberger at the line of scrimmage and caught the ball with his knees. This turnover set up another quick score on a Flacco pass and put Baltimore up 30-15. 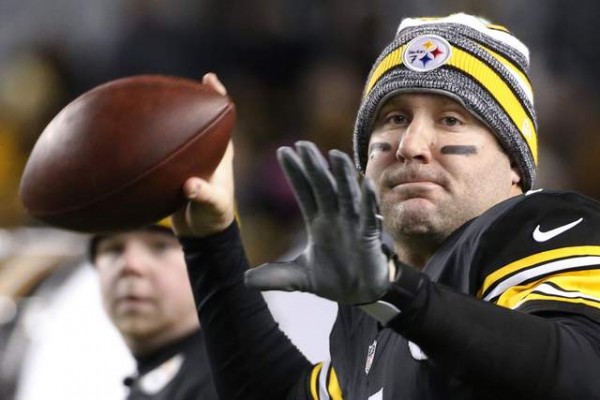 Pittsburgh’s next drive was a rough one as Big Ben was mauled repeatedly by the Ravens pass rush and the big man had to come out for a few plays. When Roethlisberger did re-enter the game, he promptly threw an interception to effectively end the chances of Steel Town. Pittsburgh did get a blocked punt very late in the game for a safety which made the final 30-17 in favor of Baltimore.