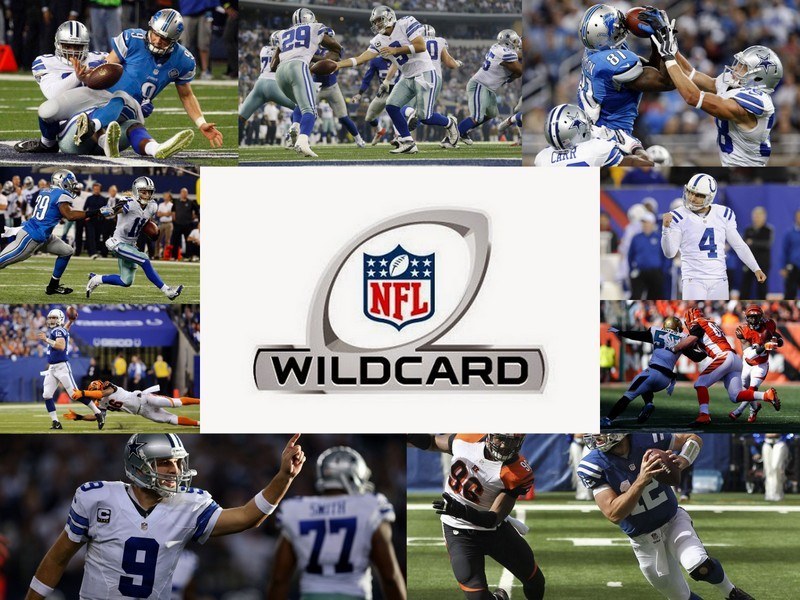 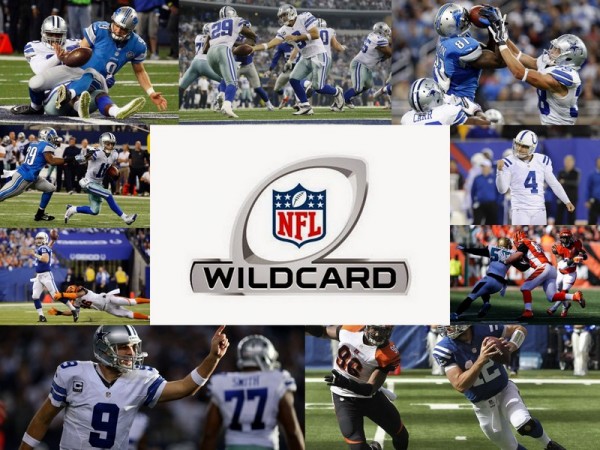 The biggest arm in the NFL belongs to Andrew Luck. He isn’t the best in the league just yet, but his arm strength is incredible. If not for a few drops in this game by his receivers, the score would have been even more lopsided in favor of the Colts. Once again the Bengals get knocked out of the playoffs before they get going good. The inability to score points has been their biggest post season issue. They were without A.J. Green due to his concussion last week so the offense suffered from that fact.

The first drive of the game from Indy showed it would be a long day for the Bengals as Luck marched his team down the field easily for a TD. Dan Herron was a big part of that first drive, but was not used much the rest of the game, especially after he had a 2nd quarter fumble. 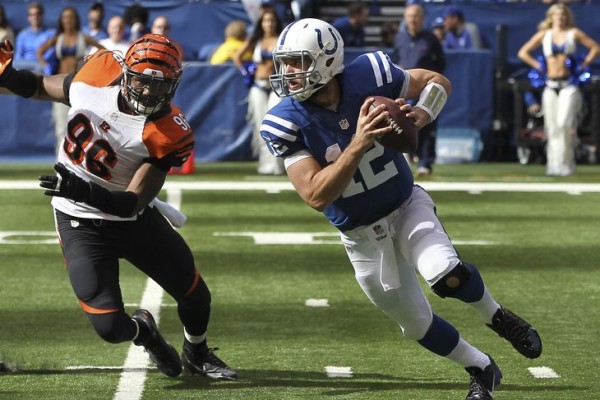 Cincinnati did answer with some offense of their own as they tied it up with a touchdown on their first drive as well. Jeremy Hill scored from a yard out to make it 7-7. That was the extent of the touchdowns for the Bengals however.

The Colts just missed on two deep passes to T.Y. Hilton who may have been a bit rusty in this game. They had to take a FG to go ahead 10-7. They tacked on another field goal a few minutes later to make it 13-7. 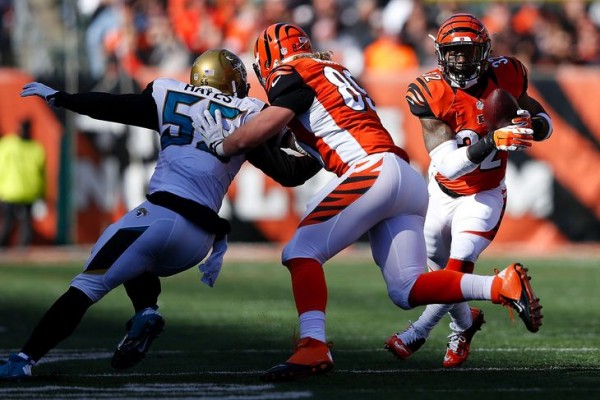 Just before the half, Cincinnati got a big first down catch from tight end Ryan Hewitt. That got them close enough to get a 52 yard FG attempt that was just barely good after the kick bounced off the upright. 13-10 Colts at the half in a close one.

The 2nd half started with three and outs by both teams. The Bengals were offensively anemic the entire second half of this game. Andrew Luck wasn’t going to go hungry for long though. He hit Donte Moncrief for a 36 yard score to put the Colts ahead 20-10.

The turning point was on the Bengals’ next drive. They had a flea flicker deep pass just miss that was there for the taking. Another big gain was called back on a penalty as Bernard had a 30 yard run negated. Chances like these can’t be missed against a team as good as the Colts. 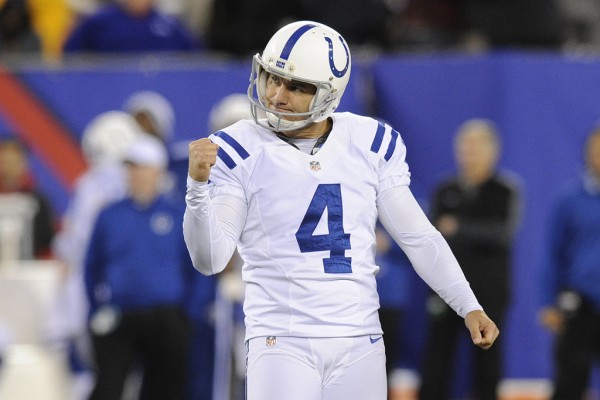 Indianapolis had a TD called back on their next drive and ended up getting a 22 yard FG from Adam Viniterri who was 4/4 on the day. The Colts kicker is the oldest guy in the NFL which makes me….old. The old man hit another field goal late in the game to give the Colts a 26-10 lead which was plenty against the ineffective Bengals’ offense. Cincinnati had a Ryan Lindley like 2nd half that totaled just 98 yards of offense.

The Colts got the 16 point win and will head to Denver next week to face their former QB Peyton Manning. I look for the Colts to upset the home team, but I have been wrong before, as my FanDuel record would indicate. 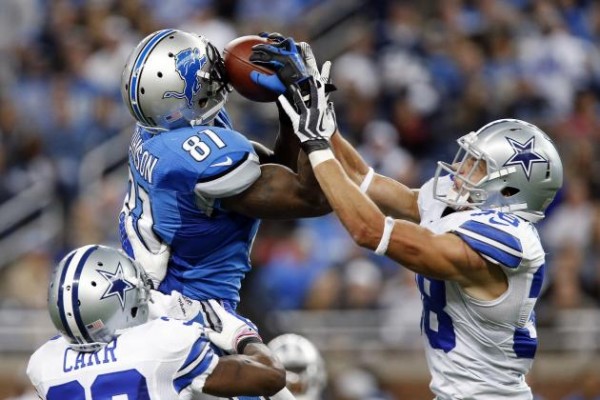 This game was a contest between two quarterbacks that have been accused, nay guilty, of not coming up big in the games that mattered most. Between Romo and Stafford somebody was going to have to win eventually.

Detroit started out in a dominant fashion on both sides of the ball. The Detroit defensive line had no trouble with the Dallas offensive front that had pushed teams around all year. The Cowboys went three and out on their initial drive while Detroit scored on a 51 yard pass to Golden Tate. Tate was on fire as he made a couple of big catches in the first half.

After Dallas was ineffective on their next drive, they once again punted it back to the Lions. Detroit needed and got a big first down when Matthew Stafford ran, yes ran, to move the chains. Reggie Bush came back to the spotlight after a rough year with injuries, as he scored a touchdown for the Lions to go up 14-0 on the home team Dallas. Golden Tate had a great block that sprung Bush on his TD. 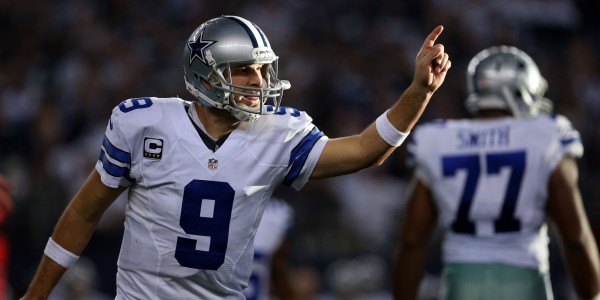 Dallas was awful in the first half for the most part. Romo was under pressure but had time to throw the ball away in most cases. Instead he took a few sacks that were unnecessary. Their third drive ended with another punt.

The Boys finally got something going as Romo connected with Terrance Williams on a 76 yard pass just before halftime. 14-7 Lions.

Detroit managed to get down the field in a hurry as they got the ball back. They ended the half with a FG to make it 17-7 in Detroit’s favor.

Matt Stafford started the second half out in a horrible manner. His pass got tipped then picked at his own 20. Lucky for Stafford, Tony Romo was still playing some of his worst ball of the year. He kept holding the ball too long and took a sack that lost his team 13 yards. That led to a longer FG try that was missed by Dallas.

The Lions got another score in the form of a field goal with seven minutes left in the third quarter to put themselves in control 20-7. They were in control of the line of scrimmage and this game. Dez Bryant was an Ex Factor in this one to this point as well. 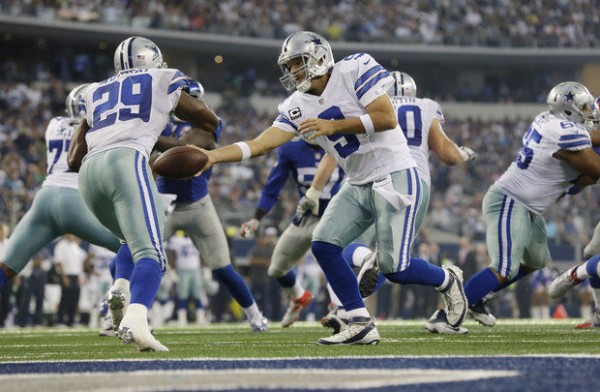 Dallas finally generated some offense on their next drive with De’Marco Murray getting in on the action. He had a TD called back on a bad holding call, but eventually stuck it in the end zone on 4th and one to give his Cowboys life but still down 20-14. They would force a three and out on Detroit’s next possession. 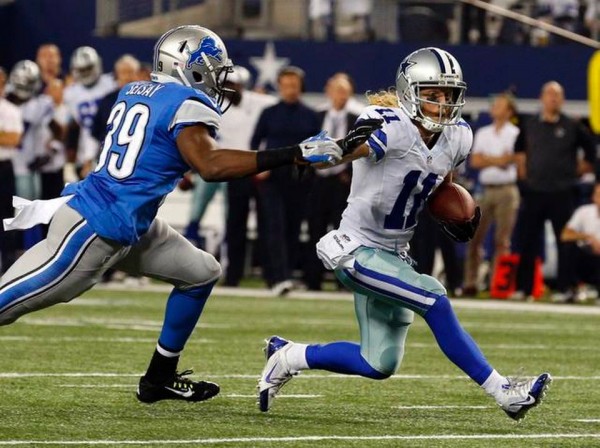 When Dallas got the ball back they moved down the field with the help of an unnecessary roughness flag on Detroit. It was a nasty hit on Cole Beasely, who may or may not be the son of country singer Tracey Lawrence. Tony Romo was choking the game away still as he took back to back sacks totaling 15 yards at the hands of Ndamukong Suh. Dallas was able to get the 51 yard field goal however, and closed the gap to 20-17.

Dallas got a big play as they kicked off then pinned Detroit at their own five with a great tackle on special teams. Detroit still managed to move the ball. Stafford was very accurate all day long and hit another bullet to Megatron to convert on third and eight. On this drive came maybe the biggest play of the game as a pass interference flag on Dallas was picked up with no explanation at all from the refs, who were later seen at a buffet of hookers and blow. I’m no Mike Perera, but I didn’t think the flag should have been thrown in the first place since the ball hit the defender in the back. Detroit ended up punting as this drive stalled. They got a ten yard punt from Martin, who was seen at the same buffet as the refs later that night.

The table was set for Dallas on this drive starting near mid field. They got a nice gain from Murray on the first play then had three awful plays to cause a fourth down attempt. Down three and out of field goal range the Cowboys went for it and converted as Romo hit Jason Whitten for 21 yards. The Dallas QB then hit Terrence Williams for another TD to take control 24-20. 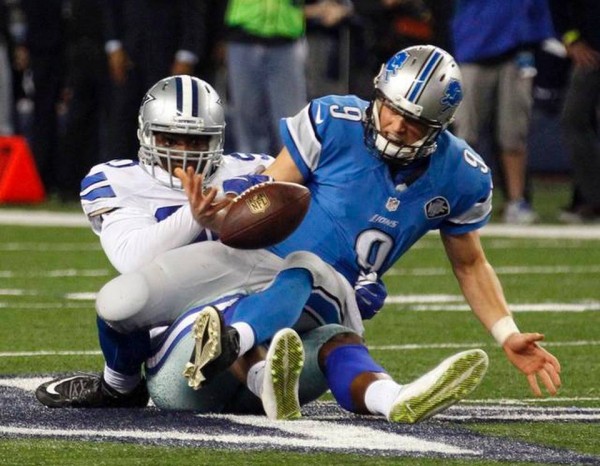 Detroit did have one last desperate drive. But it fell apart when rookie defensive lineman DeMarcus Lawrence stripped Matthew Stafford of the ball and Dallas recovered. Lawrence had got a fumble recovery earlier in the drive only to give it right back as he boneheadily tried to run with it. This time he wised up and fell on the ball to seal the game for Dallas 24-20.

Everyone will point to the flag against Dallas that was picked up, but Detroit had control of this game and let it get away from them. Up 20-7, the Lions should have stayed aggressive on offense. 20 points wasn’t enough against the Cowboys who did get a bit lucky in this one.