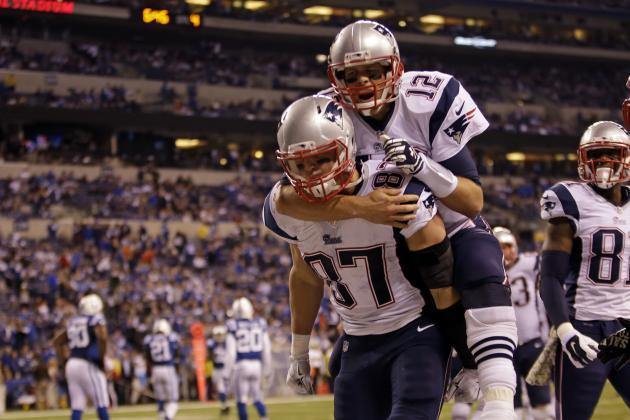 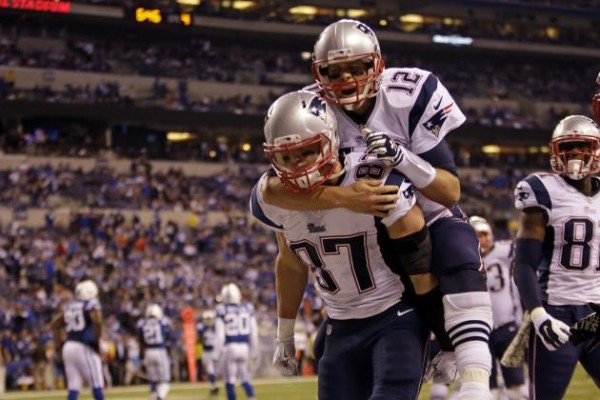 New England Patriots quarterback Tom Brady and tight end Rob Gronkowski both missed practice today. Brady’s absence is reportedly due to an illness that has kept him feeling under the weather this week. Although the cause of Gronkowski’s absence is not known, according to sources close to the team, it is not related to the knee injury that he suffered several weeks ago. Both players are expected to play in Sunday’s game. Below are a couple of visualizations detailing their importance to the Patriots’ offense.

Brady is expected to play Sunday when the Patriots host the Tennessee Titans.

Also missing from the practice was starting center Bryan Stork, who had not been on the injury report until Friday, when his status was probable.

Linebackers Jonathan Freeny and Eric Martin were also missing from the beginning of the practice. Martin missed Thursday’s practice with an illness. Freeny has not practiced this week after suffering a hand injury against the Texans last weekend.

Patriots safety Devin McCourty, who missed the team’s first two practices this week with an ankle injury, was on the field with his teammates Friday. He’s listed as questionable.

Brady is dealing with an illness, according to Jim McBride of the Boston Globe. It was Brady’s first in-season practice he has missed this season. Brady did miss training camp practice with the Patriots as he prepared for and attended court dates during the Deflategate hearings.

Gronkowski returned to Patriots practice last week after suffering a knee injury against the Broncos in Week 12. He missed New England’s Week 13 loss to the Eagles but returned to help the Patriots beat the Texans, making four catches for 67 yards and a touchdown while playing in 60 percent of the team’s offensive snaps.

McCourty sprained an ankle against the Texans and left the game in the third quarter. While his return to practice does not necessarily mean he will take part in Sunday’s game with the Titans, it is a sign that his recovery is progressing in the right direction.