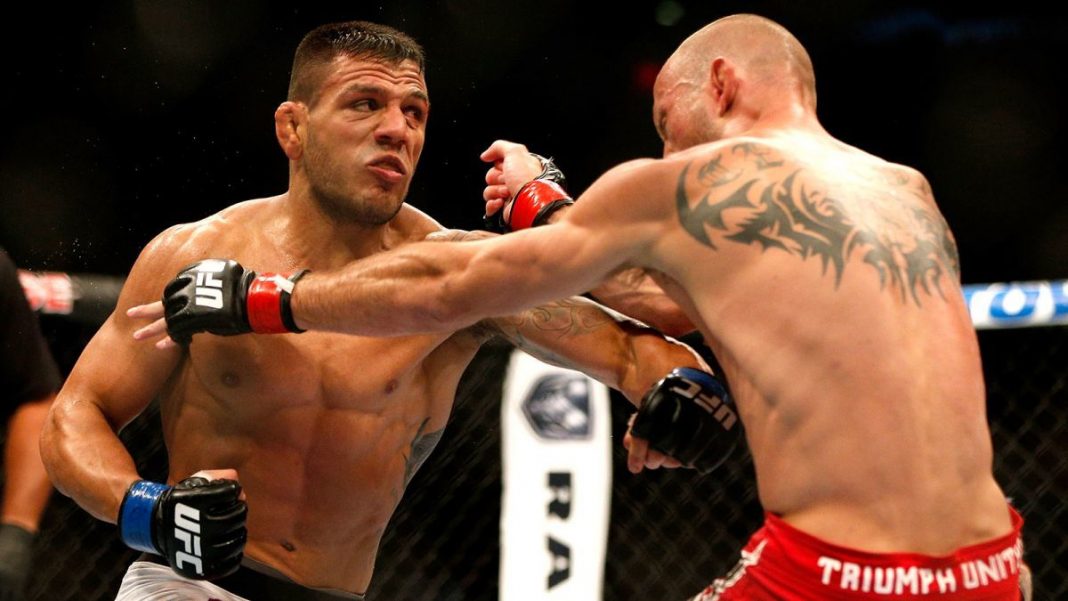 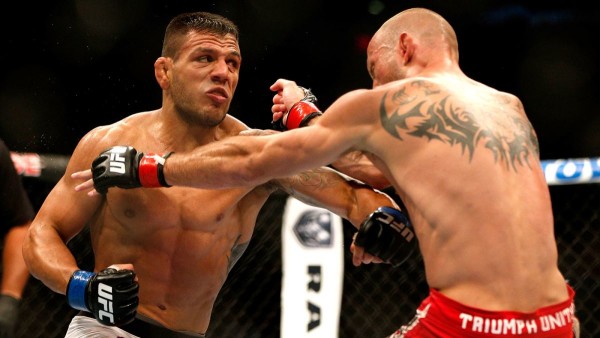 This week in MMA brought fans a surprising amount of action and news.

Of course, anyone who has ever watched an MMA fight knows that for whatever reason, some of the “big name” cards don’t always bring it, in terms of excitement. That wasn’t the case with UFC on Fox 17, which had some very interesting fights both on-paper and in the result.

Inversely, the World Series of Fighting concluded 2015 with a card that was interesting on paper but featured a correspondingly small amount of action, as eight of the nine fights on the night when to a decision (most of which were fairly conservative contests).

Let’s take a look at some of the week’s highlights!

UFC on Fox 17: A Night of Upsets and Action

It’s hard to envision a primetime show that could have gone better than this one for the UFC (Nate Diaz’s expletive-ridden rant, despite what many will say, was also good for the promotion).

In the main event of the night, Rafael dos Anjos retained his lightweight belt in a rematch with Donald Cerrone, finishing the fight via TKO in just sixty-six seconds. The Brazilian peppered the body of “Cowboy” early with a knee, and followed-up with a barrage of punches and a vicious body kick that sent the challenger tumbling. The quality of this performance cannot be understated—and dos Anjos may not be receiving the credit that he deserves.

And to the delight of the UFC brass, dos Anjos made the most out of his primetime post-fight interview, by telling Conor McGregor to stay away from his division—and his belt. After a sixty-six second knockout over one of the best in the world, this is even more of a big deal (as opposed to a long-fought decision).

All speculation of a future match-up aside, dos Anjos’s victory was remarkable; nobody has been able to finish Cowboy that quickly (and very few people finish him at all!).

In the co-main event of the night, Alistair Overeem decided he’d like to enter the free agency with a bang, as he smashed Junior dos Santos with a vicious hook to secure a TKO win. Before the late second-round finish, the fight was largely uneventful, as both men carefully chose their shots. But when the end came suddenly, the rest of the fight was in the rearview.

As this was the last fight on Alistair’s UFC contract, he is now able to field offers from other promotions—an exercised right that will certainly pay off after a win of this quality.

It should be noted that Overeem was also a fairly large underdog, according to the oddsmakers.

In the featured bout of the night, Nate Diaz returned to the Octagon after over a year of inactivity to compete against the surging Michael Johnson. And in another impressive upset, Diaz won the fight clearly, after peppering Johnson with hard, technical-boxing punches all throughout the contest, while using his movement to stay just out of range of his opponent’s punches. In an expletive-filled post-fight rant (the vast majority of which was censored), Diaz apparently called out McGregor. And although the fight is unlikely, after a performance like that, the Irishman will have no choice but to take notice of Stockton’s finest (or second finest, depending on which Diaz brother is preferred!).

And to kick-off the main card, Randa Markos battled late-replacement Karolina Kowalkiewicz. In an entertaining overall contest, the undefeated Polish strawweight kept her perfect record intact, winning via unanimous decision. As Markos is an incredibly game and well-rounded opponent, the quality of this upset victory is most definitely notable. Fans looking for the next strawweight contender may have just found the answer, in Kowalkiewicz (now all the UFC needs to do is book her versus Rose Namajunas).

The rest of the Fox card also had its fair share of large upsets, including:

Tamdan McCrory defeats Josh Samman via third-round triangle (as a +170 or so dog, in another sensational performance over a very tough and skilled opponent)

Nate Marquardt defeats C.B. Dollaway via second-round KO (as a +350 or so underdog)

These upsets, combined with those of the main card, certainly made the night notable for longshot (according to the oddsmakers) underdogs winning with relative ease.

Overall, UFC on Fox 17 delivered, and was a great way to finish the year for the promotion.

The World Series of Fighting closed out 2015 with WSOF 26, a card that featured Lance Palmer putting his featherweight belt on the line.

Although eight of the nine fights on the card went to a decision (once again in fairly conservative contests), there were still some interesting takeaways on the night.

First, Sheymon Moraes is a monster. The tough featherweight met Robbie Peralta in his (Robbie’s) first fight outside of the UFC since 2011 and won via vicious TKO. Peralta had some success early, but ultimately, Moraes simply landed an incredibly clean and powerful shot. This was the best finish of the night, without any doubt!

Next, to the surprise of few, Abubakar Nurmagomedov won his preliminary contest via unanimous decision. While not terribly interesting, he did provide a solid performance; perhaps a step-up in competition is on the way.

And finally, the main event featured the high-level Lance Palmer defending his belt against Marcos Alexandre. In yet another surprising upset, the Brazilian was awarded the decision and the championship (rightfully so, according to most scorecards). Although Palmer was competitive throughout, and notably picked up steam towards the end of the fight, the challenger was just too strong in the clinch (avoiding the takedown) and landed too many strong shots from the outside.

Palmer certainly has a bright future in the sport, despite this setback. And as he himself alluded to after the fight, not having a head coach at Team Alpha Male is becoming quite a problem. Hopefully, someone qualified will be able to fill the position relatively soon, as the gym’s fighters have largely been on a cold streak.

A Ton of Interesting Fight Announcements

The week brought no shortage of interesting fight announcements, across both the UFC and Bellator.

First, (in reverse chronological order), Sage Northcutt was announced to compete against the undefeated Andrew Holbrook at UFC on Fox 18, on January 30th. Although the fight may appear one-sided to some, it’s important to remember that Northcutt, at just nineteen years old, is very green; anything can happen inside the Octagon.

Next, Joe Warren versus Darrion Caldwell was announced as the main event of Bellator 151 on March 4th. The gritty, skilled, and tough veteran against one of the best up-and-coming fighters in the promotion is certainly a good angle, and this is set to be an awesome fight.

Fedor Emelianenko versus Jaideep Singh was once again announced as the main event of Rizin’s upcoming card (the second one). There isn’t anything positive or negative to be said here that won’t anger some fans, so it’s probably best to let readers draw their own conclusions and move on.

Also, the UFC announced that Sam Alvey will lock horns with Daniel Sarafian in Pittsburg on February 21st. Sarafian is a solid competitor, and Alvey is a very skilled and always-fun fighter, so this should be an enjoyable one for the fans (especially on free TV).

A rematch between Chris Honeycutt and Paul Bradley was announced for Bellator 148 on January 29th. This makes sense, given that Honeycutt’s training partner, Josh Koscheck, is also scheduled to compete on the card. The two high-level wrestlers met once prior, in a fight that ended in a no contest as a result of an inadvertent clash of heads.

UFC 196 was revealed to include a competition between Ovince St. Preux and Rafael Cavalcante, which needless to say, should be fun to watch.

Melvin Guillard will meet Mike Bronzoulis at Bellator 149 on February 21st. In addition to being interesting stylistically, the fight will likely be each man’s last chance to move towards the belt, as both are seasoned veterans.

And in the biggest set of fight announcements for the week, the UFC filled-out its Pittsburg card (minus the main event), with fights (other than Alvey vs. Sarafarian, which was announced later) including:

Brandon Thatch versus Siyar Bahadurzada (Thatch is still a monster, despite recent setbacks, and it will be good to watch the always-dangerous Bahadurzada compete again).

Joe Riggs versus Chris Camozzi (an especially important fight for each man, to be contested at middleweight)

Lauren Murphy versus Sarah Moras (a battle of TUF competitors)

Some of these fights are interesting, while others, frankly, are designed more to fill the card. Nevertheless, the Pittsburg show should be worth attending and watching for fans—especially with a high-quality main event.

Finally, the UFC announced a few more fights for its London card on February the 27th: Brad Pickett against Enrique Briones (anyone who doesn’t love watching Pickett compete is crazy), Arnold Allen versus Yaotzin Meza, and Davey Grant versus Marlon Vera.

Once again, this week was stacked with a ton of fights and announcements. Hopefully next week will bring some interesting developments as no major cards are scheduled (frequent fight cards are generally enjoyable, but I refuse to watch a UFC event on Christmas!).

Happy holidays, and enjoy the fights!

The promotion finalized the contest just weeks before the event, although the two were initially rumored to be competing. This makes one wonder if the promotion was actively searching for a better opponent for Fedor, but kept Singh on retainer in case nobody else could be found. While interesting, the theory is essentially disproven by the fact that Shawn Jordan completed his contract with the UFC in the hopes of fighting Fedor (negotiations could have always fallen through, though).

Frankly, North American fans don’t know a whole lot about Jaideep Singh, so the fight does well, at the very least, to enhance the “mystery” of the Rizin events.

And whatever one’s opinion of the contest, the action can be enjoyed free (although not live) on Spike, on December 31st.