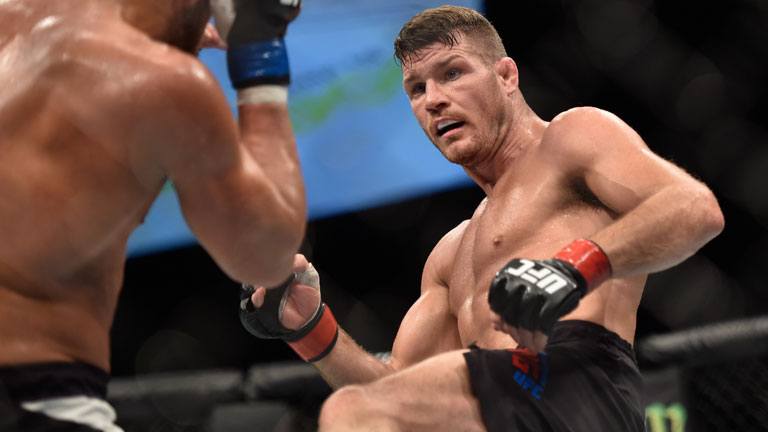 This bittersweet week in MMA brought some notable disappointment—mainly in the form of Rafael dos Anjos’s injury. Still, between UFN 84 and Bellator 150, there was quite a bit of action for fans to enjoy, most notably, a Fight of the Year contestant between Michael Bisping and Anderson Silva.

UFC Fight Night 84 Delivers, Largely Thanks to Its Main Event

UFC Fight Night 84, before its main event, was a reasonably fun card to watch. The main card kicked off with a bantamweight contest between Brad Pickett and Francisco Rivera, which saw the Englishman secure the split-decision win in what was a close overall fight. Although the bout looked like a barnburner on paper, both men had a good amount of respect for the other’s hands and overall abilities, and there were only a couple of small flurries of fast-paced action (good on them for recognizing the ability of each other, especially in Pickett’s case, as getting caught up in a brawl would have been very easy in front of his hometown crowd).

After that, Tom Breese kept his undefeated record intact with his first visit to the scorecards, securing a unanimous decision. Keita Nakamura found a reasonable amount of success—certainly more than his massive underdog odds indicated that he would—but was at no point in any real position to finish the contest; nor was he close to being finished himself. This wasn’t a thrilling fight to watch, but there was a good amount of action.

The co-main event was certainly impressive and interesting to watch but probably wasn’t exciting, for most fans. Gegard Mousasi peppered Thales Leites with jabs, straight punches, and just about every other stand-up strike in the book en route to a one-sided unanimous decision. The contest saw him take essentially zero chances, and notably, he was able to successfully integrate his gameplan, even with Leites knowing full well of its nature.

The main event carried the entire card; a spirited five-round war between Michael Bisping and Anderson Silva will go down as one of the division’s best contests of all time, and may very well be the Fight of the Year.

The first round saw Bisping land the better shots overall, and on most every fans’ scorecard, win the stanza. His movement and volume were of the utmost importance here and in the fight as a whole.

The second round contained more of the same, as “The Count” expertly tagged “The Spider” with noticeably hard shots. The defining moment of the round, and one of the most important moments in the fight, came towards the tail end when Bisping landed a slick combination on the chin of Silva and dropped him to the canvas. This round was certainly Bisping’s as well.

The third round was where things got out of control. Bisping continued to land shots due to his movement and pressure, which Silva was having a hard time dealing with. The key moment, though, came with about three seconds left in the round. Just prior, Bisping had lost his mouthpiece, and while Silva backed away from him (Bisping was on the fence), he motioned to have it back. At this point, Silva charged forward and landed a vicious flying knee, and then proceeded to jump on the fence as though he had won the contest. There are a few important points to note about this occurrence, which seem to be largely overlooked.

First, for those claiming that Bisping should have been defending himself at all times: you’re right. But more importantly, he was; when the flying knee landed, it wasn’t like he was counting the lights on the ceiling, as he put his hands up in a normal defensive position. The movement and timing of Silva allowed him to land literally one of two strikes which he could have from that range: a flying knee or a front kick to the face.

Which ties directly into the next point: Silva most certainly shouldn’t have thrown the strike. Sure, fans will claim that it’s his job to fight until told to stop—they would be right once again. However, especially given his talent level and experience, it’s also his job to not land questionable shots like that, and given the thousands of hours of combat sports experience that he has—some of which were logged in much more intimidating environments—there is no doubt that he knew damned well when and why he threw the strike.

Finally, to keep things moving, Bisping of course, has an absolutely incredibly warrior spirit, toughness, and will to win. And for those who claim that the fight should have ended there, it’s important to remember that in all reality, Silva couldn’t have stopped the fight with additional strikes, given the literally one second remaining in the stanza, and more importantly, the strike wouldn’t have landed without the mouth-piece confusion.

The latter of these points is of the utmost significance, and cannot be overlooked; Silva didn’t throw, let alone land, a flying knee at any time when Bisping’s guard was up, from the clinch position or otherwise. More pressingly, the only other similarly punishing strike that he landed was the front kick to the face in the fifth. Silva didn’t land any other vicious shot before the mouth-piece incident, and it’s not a coincidence that this smashing blow connected when it did. This questionable strike cannot award Silva the entire fight. But, it was certainly powerful enough to win the round with no questions asked (because it occurred in the duration of the round, and wasn’t ruled as illegal, it must be considered).

The fourth round is where most of the subsequent controversy arose, as on most fans’ scorecards, the ultra-close stanza decided the fight. Bisping continued to pressure Silva up against the cage while finding success with his strikes at range. But given the range, pressure, and shots of Bisping, he did enough to win the fourth.

Additionally, given Silva’s tendency to put his back up against the cage and wade opponents inwards, and the criticism that this habit has received as of late, it’s worth mentioning that this is an integral part of his game. It’s from this position, and really any position, that the “clowning” and taunting are performed in an attempt to cause an opponent to leave an opening. Silva isn’t taunting his opponents for fun, but rather to try and gain an edge.

The fifth round saw “The Spider” land some of his best strikes of the contest, including an impressive front kick to the face of Bisping. Still, the forward pressure of “The Count” was present. Nevertheless, Silva took this round.

Overall, once again, this fight will go down as one of the best of the year, at the very least. The judges’ decision may be controversial, but given the closeness of the fight and the general chaos and uncertainty involved, this can be expected. On my personal scorecard, I did have Bisping winning the fight 48-47.

Let’s stop fighting and focus on the future: Bisping’s divisional standing has certainly improved, but how much remains to be seen. Moreover, given that the loss has essentially nixed any hope of Silva fighting for the title that was formerly his, I can’t be the only one who wants to see him battle Carlos Condit. 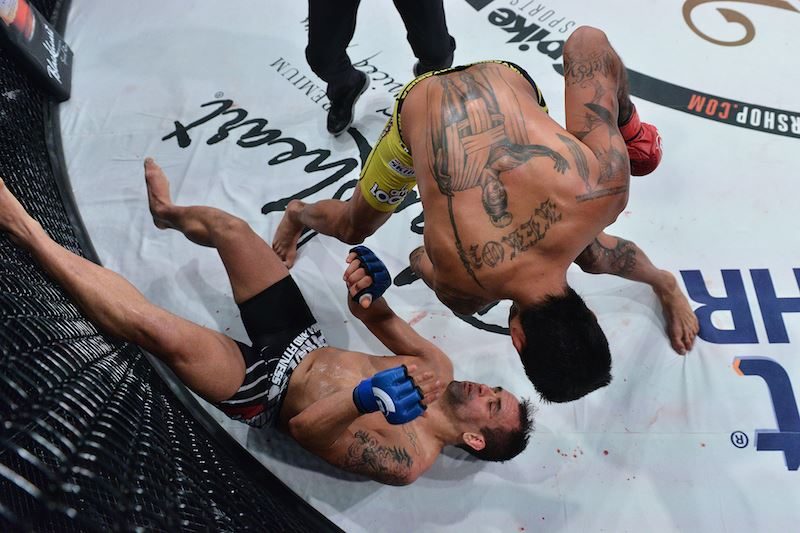 Despite losing its main event, which was easily its most anticipated fight, Bellator 150 delivered some solid action.

The main event of the night was a fairly interesting, but not overly exciting, heavyweight tilt between Cheick Kongo and Vinicius “Spartan” de Queiroz. In the end, the impressive groundwork—even when forcing standups—of Kongo, in coordination with his powerful striking, allowed him to nab the split decision.

In the co-main event, Kansas favorite David Rickels defeated Bobby Cooper via impressive first-round TKO, demonstrating his relentless and truly savage “Caveman” style in the process. Rickels versus Derek Campos is now the lightweight fight to make for Bellator, in my opinion. 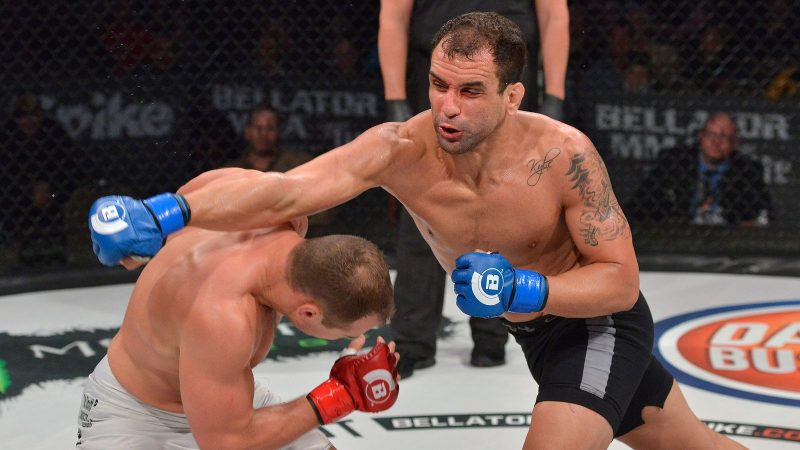 The featured fight of the night pitted Kendall Grove against Francisco France, and in the second round, the TUF winner Grove would secure the win via vicious knockout—bringing his KO streak to two, and more importantly, demonstrating his worth as he enters the free agency.

Before that, Chuka Willis proved to be the better prospect as he gave Gaston Reyno his first professional loss. Reyno worked hard for the finish on several occasions, but the physical power of Willis was on full display, and he simply overwhelmed his opponent with this raw power.

The main card kicked off with a solid women’s flyweight contest between Rebecca Ruth and Lena Ovchynnikova, which saw Ruth pull off the impressive upset by overwhelming her opponent in just about every walk of the fight.

Overall, Bellator 150 wasn’t incredible, but it was a fun card to watch as a whole, even given its late main event loss. 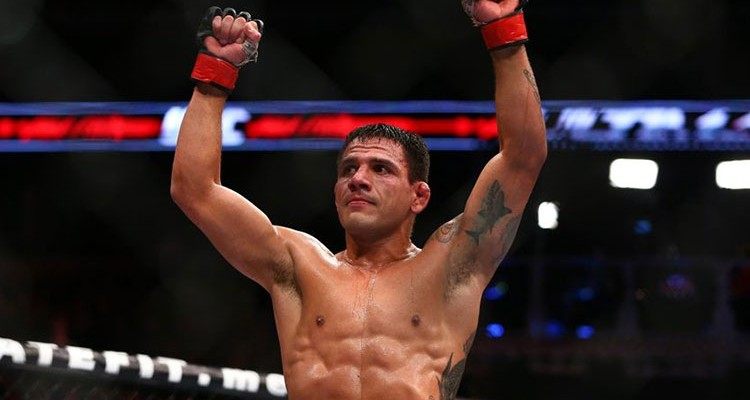 In the most devastating development of the week, it was revealed that UFC Lightweight Champion Rafael dos Anjos suffered an ankle injury in training. He subsequently withdrew from his contest with Conor McGregor next week.

We were very close to witnessing an awesome contest between two champions, but nevertheless, an impressive replacement has been found in Nate Diaz. The Stockton native will compete against McGregor at welterweight in the same main-event slot.

The expected recovery time for RDA’s injury isn’t too long, and hopefully, he can heal up quickly so the super fight between him and McGregor can be arranged next.

This week in MMA brought a ton of exciting action for fans to enjoy, and with UFC 196 scheduled for next weekend, in coordination with Bellator 151, there should be plenty to appreciate during this week as well.