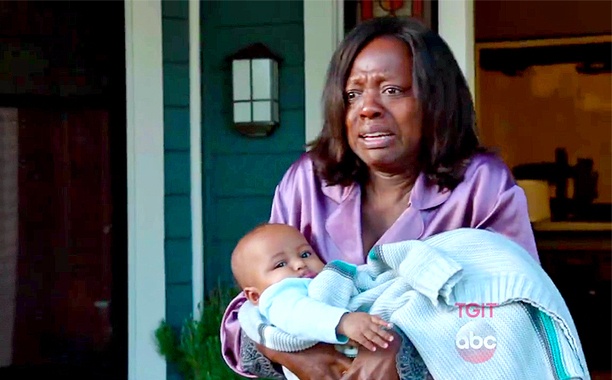 Where do I even begin with the winter season premiere of How to Get Away with Murder? It is all over the place (in a good way), and it goes so much deeper than any of us thought.

Annie is okay ya’ll! But we knew that already right? She is out of the hospital, and Bonnie takes care of her. And by taking care of her, I mean keeping her doped up on pain meds to the point of total exhaustion and hallucination. Bonnie does all of this so that she cannot testify to the lie that Catherine shot her and killed ADA Sinclair. While Annie number two is doing that, the Keating Five are reeling trying to figure out their next step.

Let’s talk about Annie’s hallucinations. There is a baby, a beautiful baby boy. We see a woman frantic at Annalise’s front door who hands the baby to her. Annie doesn’t know what to do as the woman pushes the boy in her arms. She calls Bonnie telling her to “come quickly” and when she does, we find out that there is no baby. It’s all in Annalise’s head, which shows how much trauma she is really experiencing. Oh and the “woman” at the door with the baby is West’s mother. It all ties in at the end.

Asher cannot get past the death of his father, which by the way, he believes was not suicide but murder. When we saw him at the end of the last episode (in November), he was at the police station, remember? Well, he wasn’t there telling on the crew, he was there to report what he believed to be the killing of his father. Connor and Ollie help him take his mind off of his worries (no not like that) as he spends time at their apartment playing video games. Oliver is irritated, Connor feels guilty.

Then there is West, and his whole world is just broken. Not only does he believe Annalise told him the truth, Rebecca is dead, but he doesn’t want anything to do with her. Laurel tries her best to get him in better spirits, but he’s just not having it.

Speaking of being in better spirits, Caleb is not. He doesn’t believe Catherine is guilty of the crime everyone is trying to pin on her, and he even stops dealing with Michaela. She seeks to reason with him, pointing to the “facts” that clearly show his sister shot Annalise and pushed ADA Sinclair off of the roof, but he refuses to entertain that notion because he knows Catherine. “You all deserve to burn in hell,” he tells her.

With Annie out of commission, Bonnie and Frank come up with the idea to concoct a written statement to be read in court about what happened that night. But the judge does not accept it. With that idea out of the window, they scramble to come up with something else. But alas, they don’t have to because Laurel, who tells Annie earlier what Bonnie has been doing to her, calls Annalise and she shows up, taking the witness stand. She’s good at the beginning but starts hallucinating again about that damn baby. Which leads to her spacing out and the judge calling a recess.

During their break, West confronts his professor turned boss, but she ignores him. She goes back on the stand and all of a sudden, her story changes. It seems she purposefully throws the case (from the witness stand) by confusingly admitting that she doesn’t know what happened that night; she didn’t see Catherine chase Sinclair on the rooftop, and that Catherine didn’t shoot her parents. Yes, Annie violated client confidentiality, which prompts Catherine’s lawyer to demand the case be thrown out because Annalise is incoherent. Or so it seems.

We then see Caleb sitting in the car with Annie. He reluctantly agrees to convince Catherine to say that she was under Philip’s influence when she shot Annalise (she did not shoot Annalise). Right before the Judge gives her decision on whether or not the case should go to trial, Catherine stands up in front of everyone and says that she did shoot Annalise that night because Philip drugged her. Her Lawyer loses it and demands that her statement be taken off the record because her client, basically, is out of her mind.

After the judge’s new decision (Catherine gets five years in a minimum security prison) Bonnie confronts Annie about the events of that night. Apparently, Annalise wanted to die and is why she was willing to be shot in the first place. Interesting.

West, after everything is said and done in court earlier that day, rushes to Annie’s house to get to the bottom of the whole “Christophe” mystery. While the Keating Five eat tacos and celebrate their “win for the day” at Frank’s house, Annie finds the young man lying in her bed. He tells her that he needs answers. “You knew my mother didn’t you?” We then flash back 10 years to a pregnant Annie watching him on a playground sitting next to his mother.

Annie refuses to tell West what she knows about his mother. He insists that she does in fear of him attacking her, she grabs a small object. “…You ruined me” she tells him and then kicks West out of her house.

She immediately follows after him calling out “West, wait.” She creeps through the house to see if he’s still there but instead of finding him;  she has another hallucination about the baby, which leads me to believe that it is the son she lost 10 years before.

We got a lot of info this week, and I can’t wait to see Shonda tells us next.