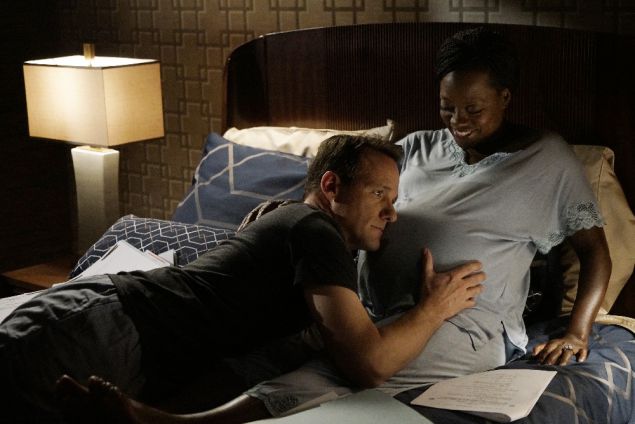 This week on How to Get Away With Murder, we get more details into what happened to Annie a decade ago, and we find out that the team is in deeper trouble than they thought.

West and Annalise both see doctors, and while Annie is released to go about her day, West screws up and says that he might shoot himself if he doesn’t get sleeping pills. His comment causes the doctor to force him into the psyche ward, which is the one thing he did not want to happen.

He calls Laurel for help and she shows up as his “girlfriend.” However, West’s doctor either does not buy it or has a thing for him because she rips into Laurel calling her a bad mate who must want her boyfriend to commit suicide. Laurel tries to use some lawyer mumbo jumbo on her but the young doc schools her instead. So she leaves to tell Annalise and begs her to see their troubled team member. But Laurel’s nagging only pisses Annie off, and she fires her from her position as the “new Bonnie.” Just as soon as she kicks her out, Caleb pops up.

While he really doesn’t want help from Annalise, he can’t get past the fact the real person (or whom he is lead to believe is the real person) Philip, killed his parents and framed his sister. But Annie doesn’t want to hear it. In fact, she is rude and cold to him, kicking Caleb out without offering any compassion or assistance. I tell you, this woman is good at what she does.

Along with dealing with the usual bull crap, Annalise’s weekly case is a young man named Jason, who killed Tyler Robinson for sleeping with his girlfriend. In the plea deal proceedings, Tyler’s mom, Joyce, stands up and demands a restorative justice hearing because she believes that what Jason did was a mistake and he doesn’t deserve 15 years in prison. Annalise thinks it’s a bad idea, but the judge demands that it takes place.

At Ollie and Connor’s house, Michaela joins the guys for dinner and while Asher “goes to the bathroom” he low key overhears them complaining about him. Oliver finds him annoying and Connor boasts about how good of a person he is for letting him stay with them.

Annalise tasks Michaela and Bonnie with finding info for Jason’s case and what they uncover not only proves that he killed Tyler on purpose, but that he tried to hide it. In the victim’s text history, a message went to his mother that said “… I luv you.” Tyler never spelled love that way. They confront Jason, and he confesses that he sent the text message. “Don’t ever tell this story again,” Annalise tells him.

During the hearing, Joyce tells Jason that she forgives him because she knows it was an accident. In her view, he made a terrible mistake, but there is no reason to ruin his life over it. Her words clearly get to him because he ends up confessing that he shot her son on purpose, sent the text message and let him die. Jason’s confession prompts the DA to change his charge from second-degree to first-degree murder and naturally she wants the death penalty. But surprisingly in all of this, the Joyce still offers him forgiveness and demands that Annalise fights against a death sentence because his confession proves that he is savable.

Annalise goes back to the Keating Five, tasking them with finding precedence so that Jason can receive the sentence he had before the restorative justice hearing. They, however, are done with her. Michaela doesn’t hold back in expressing her disgust for the situation, citing that she can’t stomach helping a real killer when Catherine (who didn’t kill anyone) is behind bars. Then, when Laurel tells them that Annalise knows West is in a psyche ward but won’t do anything, the team, save Bonnie and Frank, walk out on her.

They head to get West, mostly because they are afraid he will tell on them, and when they get there, West is waiting for them as he has already been released. In the car, he tells them that he talked about his childhood, which got the doctor off of his back.

Speaking of West’s childhood, we learn a lot of things about that time through the flashbacks this week. Bonnie and Frank have been with Annie at least 10 years; Annalise was pregnant with a boy, and it seems that whatever info she found on West’s mother drove her to kill herself.

In the end, things take a turn for the worst when Connor receives a chilling email. In it, a video (assumedly from Philip) places the Keating Five at the Hapstall house on the night of ADA Sinclair’s death and Annalise’s shooting.