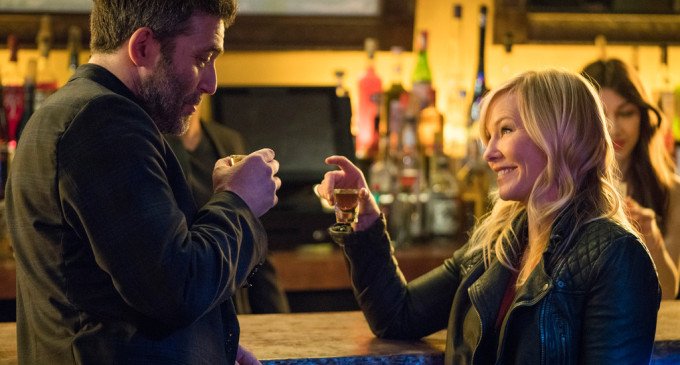 On this week’s episode of Law & Order: SVU, a patient named Kristi, in the ER filmed her surroundings while stating that she had already been sitting there for two hours, waiting to be seen. She said she was waiting for a sexual assault nurse to help her. Then a nurse came to her to assist her, and she secretly continued to film what was happening. She got caught filming, and the nurse told her it was against hospital policy to do that. She kept secretly filming as Sonny and Rollins came in to speak to her. She told them she was raped in a nightclub restaurant.

Rollins asked Kristi for a description of her attacker, and she said she had a picture of him on her cell phone. That was when Sonny noticed she was filming them. She said she was doing it because she was a Vlogger and her followers would want to know what happened to her.

Benson said that Bobby D’Amico was the celebrity owner of the nightclub where the woman was assaulted. Rollins viewed footage of Kristi and Bobby together, prior to the incident. Rollins said the woman accused Bobby of rape because he had followed her into the ladies room. Rollins told Benson that Kristi had been at the nightclub with her friend Sheila, celebrating Sheila’s birthday.

Rollins and Sonny went to the friend’s place of work and spoke to her about the night Kristi was raped. She said she put Kristi in a cab to go home at 3:00 in the morning. She said she was with Kristi all night except for just after 2:00 in the morning when she went outside the club to smoke. She also said that they were both pretty drunk that night. She told them the manager’s name was Noel and that Kristi had danced with him and made out with him.

Chief Dodds went to talk to Bobby on the set of a TV show he was filming. He was told that Noel had worked for the nightclub since it opened. Bobby said Kristi was a freak, but he had sex with her in the bathroom of the nightclub. He insisted that the sex was consensual but that Noah went to find Bobby and Noel ended up having consensual sex with Kristi too. He said if she was complaining now it was just a shakedown.

Back at the station, Benson said she and Dodds would speak to Kristi to find out what else she hadn’t told them. They also went to talk to Noel, and he told them that when he went into the bathroom to find Bobby, Kristi invited him to stay in there with them. Dodds and Benson told Noel they needed to view security camera footage of the night in question.

Kristi told Rollins and Sonny that she went into the bathroom with Bobby, but she didn’t tell them that at first because she didn’t want them to think she was a slut. Sonny asked her if she had consensual sex with Bobby and she said it was just oral sex that was consensual. She said when Noel came into the bathroom Bobby asked her if he could join them. She said she wasn’t into it but that Noel wouldn’t leave. She said after Bobby left the bathroom Noel pushed her up against the sink while she was washing her face and that he raped her from behind. Kristi said even though she got raped she went back out on the dance floor with Sheila because it was Sheila’s birthday and she didn’t want to ruin it for her.

Benson was told to send Kristi home because no charges would be pressed in the case. She told Kristi there was not enough evidence for them to arrest either Bobby or Noel. She said she believed Kristi’s claims, but they wouldn’t be able to prove that Noel was guilty of rape. Benson offered Kristi medical care and counseling for the rape.

Benson then found out Kristi’s latest vlog entry had gone viral. She said she was gang raped by Bobby and Noel and that she told that to Benson, but she didn’t believe her, even though Benson had told Kristi she did believe her. She said to the SVU she was a special victim but not as special as Bobby.

Kristi told Sonny and Rollins it was obvious they were looking out for her attacker rather than for her. She explained that she only slept with Noel because Bobby said it would hurt Noel’s feelings if she didn’t. Kristi refused to take her vlog off the Internet. Then she showed Rollins and Sonny posts on her vlog in which another woman said she was sexually assaulted by Bobby and Noel. They went to talk to the woman, Tara but Tara didn’t want to tell them anything. She then confessed Bobby asked her to “take care” of Noel. She said she tried to escape them, but they wouldn’t let her and that she was raped by Bobby too. They found out Tara was working with Bobby on his TV show, and that’s why she didn’t want to report him to the police. Barba said they wouldn’t have a case until more of Bobby’s victims came forward.

At the nightclub Bobby had a drink with Rollins, who was working undercover. In the bathroom, Bobby and Rollins were making out and Rollins told Bobby she was sorry she forgot to tell him that she had a boyfriend back home. He said that was alright and he wouldn’t say anything. Then Noel came into the bathroom and started making out with Rollins, but she said she wanted to go back out to the bar. She kept saying no and then she kneed Noel in the crotch. Then she threw Bobby up against the bathroom wall and told him not to move. She let him go and exited the bathroom. Bobby came after her and found out she was a cop. She then arrested Bobby for attempting to rape her. Since he had already been assigned a lawyer Rollins was threatened with a lawsuit against the NYPD if she didn’t let him go.

Benson was angry when she found out that the Sergeant and Rollins had gone undercover without permission to do so. Benson and Barba told Kristi to hand her purse and cell phone over to the NYPD while they talked to her. Barba said they wanted to give Kristi a taste of what the trial was going to be like.

At the trial it came out that Bobby had given Kristi free drinks at the bar the night of the incident. Noel’s lawyer pointed out that originally Kristi said that only Noel raped her but then later on she said that Bobby had to, after she had given the impression the sex was consensual. Kristi testified that Bobby had said since she was sleeping with him she had to sleep with Noel too. She said she was forced to have sex with Bobby while Noel watched. The jury was shown a picture of Kristi drinking with Bobby and Noel, and in the picture she looked like she was having a good time. Noel’s lawyer accused Kristi of crying rape to get her vlog to go viral. The next day in court Noel’s lawyer refused to call up any witnesses because he felt the jury had enough to go on.

The jury found Noel and Bobby not guilty of rape or sodomy. Kristi said she was a national joke and now no one would ever believe her. NY1 aired Rollins’ video footage of her encounter with Noah and Bobby in the bathroom and stated that the two were let go because the jury wasn’t permitted to see the footage. Benson told Rollins she was going to be investigated for filming the footage without permission from her. Benson though Rollins had leaked the footage to the media but then she found out the Sergeant had actually done it.