President Donald Trump promised to shake things up in Washington D.C., and boy, has he ever fulfilled that campaign promise.

After former national security adviser Michael Flynn abruptly resigned Monday night, the White House quickly pulled together a short list of replacements for one of the more difficult positions to fill.

Rather than focus on the negative ramifications of the investigation into whether he has ties with Russian, Trump chose to tweet about all those illegal leaks coming out of his White House. He even slipped in a little bit of his fear mongering in, but even he must realize this is fruitless.

While his supporters may continue loving his antics, Republicans and the Washington establishment have quickly soured on them.

The real story here is why are there so many illegal leaks coming out of Washington? Will these leaks be happening as I deal on N.Korea etc?

“I feel it is unfair that I have been made the sole scapegoat for what happened.”

CUMMINGS: “Madam leader, just this morning, Flynn tweeted, and this is a quote, ‘scapegoat,’ end of quote. Scapegoat. He basically described himself as a scapegoat.”

PELOSI: “I have a tweet, I’m going to make, I’m telling my staff right now – It’s not scapegoat, its stonewall, and that’s exactly what the Republicans in Congress are doing.”

While Flynn did once have a verified Twitter acount during Trump’s campaign, it isn’t active anymore. His son Michael Flynn Jr. tweeted that those weren’t his father’s tweets.

The mistake was acknowledged later, but it does show how social media isn’t so reliable after all. Imagine that. 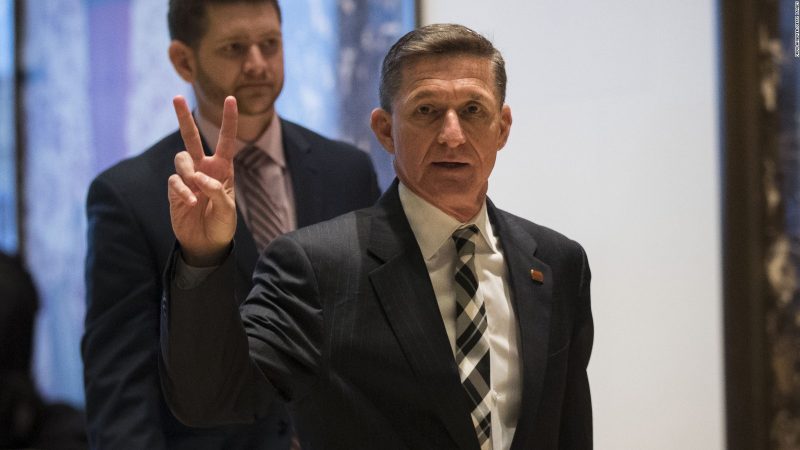 His administration dealt a significant blow after less than a month in office, President Donald Trump must now fill a vital national security post after the resignation of embattled national security adviser Michael Flynn.

Flynn stepped down late Monday, ending days of speculation about his fate following reports that he had misled Vice President Mike Pence and other officials about his discussions with Russia prior to Trump’s Jan. 20 inauguration.

Whoever emerges as Trump’s choice will lead the National Security Council at a time when the young administration is grappling with a series of national security challenges, including North Korea’s reported ballistic missile launch.

The White House is also dealing with the fallout from the rocky rollout of one of Trump’s executive orders on immigration, which has been blocked by the courts. The order was intended to suspend the nation’s refugee program and bar citizens of seven Muslim-majority countries from entering the United States.

Trump named retired Lt. Gen. Keith Kellogg as the acting national security adviser, one of three candidates the president has under consideration:

Kellogg had previously been appointed the National Security Council chief of staff and, along with Flynn, advised Trump on national security and foreign policy issues during the campaign. He had been considered for national security adviser before the post went to Flynn.

Kellogg was chief operating officer of the Coalition Provisional Authority in Iraq, the interim governing body following the fall of Saddam Hussein in 2003. He previously worked as executive vice president of research and technology for Virginia-based information technology firm CACI International, a contractor for defense, intelligence and homeland security agencies.

The most audacious choice would likely be former CIA director David Petraeus. A retired four-star general, Petraeus was bounced from his position atop the intelligence agency in 2012 after he it was revealed that he had passed classified information to his biographer, who had also become his mistress.

He later pleaded guilty to one misdemeanor charge of mishandling classified information. He was also fined $100,000 and remains on probation.

But during the campaign, Trump spoke sympathetically about Petraeus’ plight despite his frequent criticisms of his Democratic opponent Hillary Clinton for mishandling classified materials. Petraeus was briefly under consideration to become secretary of state before Trump picked Exxon CEO Rex Tillerson.

Upon retirement in 2013 after a nearly 40-year career in the Navy, Harward became chief executive officer for defense and aerospace giant Lockheed Martin in the United Arab Emirates. Trump has recently been in very public negotiations with Lockheed over the cost of its F-35 fighter jet program.