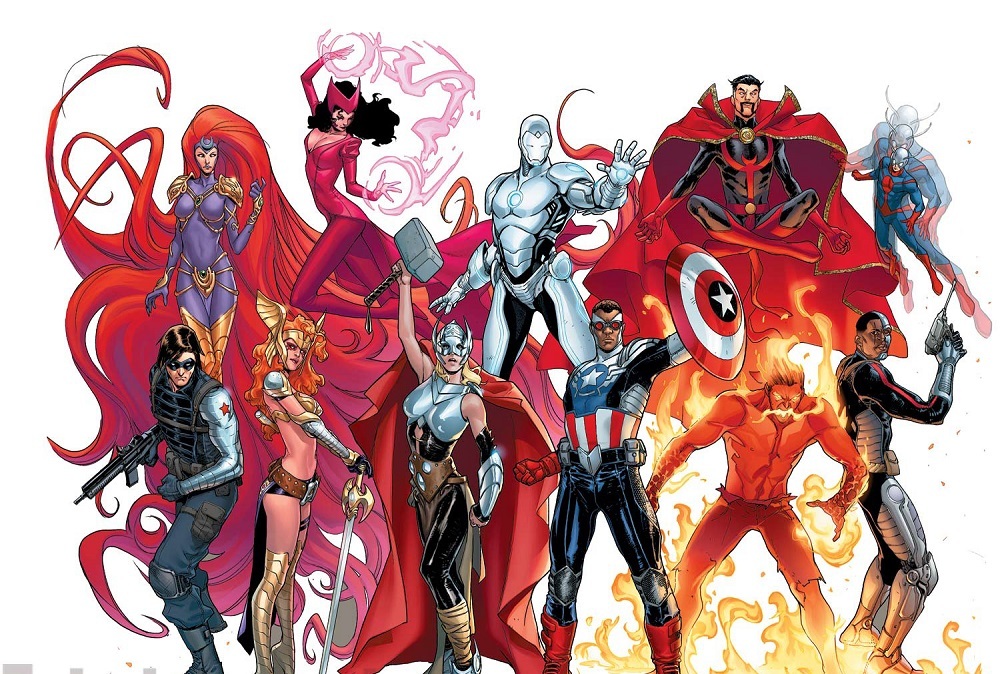 Marvel Comics is currently doing damage control. The brand that can do no wrong in film is having problems in print. The damage control situation stems from a statement by Marvel Comics Vice President of Print and Marketing David Gabriel that their push for diversity in comic was not working.

“What we heard was that people didn’t want any more diversity… I don’t know that that’s really true, but that’s what we saw in sales.”

Earlier news suggests that Marvel will be bringing its core heroes back, probably after their last major event Secret Empire. Marvel also said that they’ll be doing a moratorium on multiple crossovers which they’ve relentlessly been doing the past years.

There are comic book fans out there who can’t afford purchasing multiple titles. This fan for instance, lives off on borrowing from his friends or reading into them on Wikipedia or catching up on YouTube. In the pre-internet age, I was concentrated on Ghost Rider, Spirits of Vengeance and X-Men Classic. A friend of mine was into X-Men, Uncanny X-Men, X-Factor and X-Force and we borrow from each other every time we meet up.  The only time I got into any major crossover was during the Midnight Massacre event (with black covers) and Siege of Darkness to which I had to buy all the books involved (NightStalkers, Ghost Rider, Spirits of Vengeance, Morbius the Living Vampire and Darkhold). These events were somewhat in parallel to X-Men’s Age of Apocalypse and the Onslaught Saga to which me and my friend cooperated on. That was an expensive undertaking. Imagine if we were still at it.

So as for Marvel’s events, they’ll be cutting back as not all fans can buy all the books they need. Some fans may be into the X-Men; others the Avengers or Spider-Man. Secret Empire is going to be the last of those major events where Ultimate Spider-Man Miles Morales would be seen killing Hydra Captain America. With Miles Morales, let’s go back to diversity.

Most of us geks probably know this but for others’ sake let’s elaborate on diversity. These past couple of years, Marvel has gone gangsta on diversity for some reason. Whether it’s third wave feminism, increasing gender equality awareness and the social media preoccupation with political correctness. As said before, Marvel often reflects the issues of the time. We now have more female leads, more ethnicities and some gender identities. The transition of Miles Morales to the mainstream Marvel universe, poised to replace Peter Parker who is now currently too busy running his own company. Tony Stark, after the events of Secret Wars is now in a coma and has been replaced by female black teenager, Riri Williams. There are actually two Iron Men flying around; Riri Williams and Doctor Doom. We’ve had Pakistani Muslim female teenager Kamala Khan who took on the mantle of Ms. Marvel from Carol Danvers who will be having a movie by the way featuring Brie Larson.  The current official Captain America is Sam Wilson, formerly the Falcon. The Hulk is now Korean genius teenager Amadeus Cho who took Bruce Banner’s power. Bruce Banner is now dead by the way. She Hulk Jennifer Walters is being positioned as the current savage hulk persona because of PTSD. The mantle of Wolverine is now in the hands of teenager Laura Kinney also known as X-23 whom we’ve all seen on the awesome Old Man Logan film. Thor is now female whose secret identity is Jane Foster who the general public identifies with Natalie Portman; due to Odinson becoming unworthy in one of Marvel’s many, many crossover events. Ghost Rider is now Latino LA resident Robbie Reyes. And they made X-Men’s Iceman gay. Not the mainstream Iceman but the version snatched from the past. Confusing huh? It’s comics.

There’s really nothing wrong with diversity. If Marvel only looked into its inner character line, their lineup is already very diverse.

They just need to bring the focus back to these characters in main or supporting roles. What happened with Marvel according to some fans is that they did things too quickly even going so far as to replace their core characters like Thor, Iron Man, Captain America, the Incredible Hulk, Ms. Marvel and Spider-Man. There was previous talk before Captain America Civil War that Marvel should use Miles Morales instead of the traditional Peter Parker. Fans were totally divided because even the general public knows that Peter Parker is Spider-Man at the very least from newspaper comic strips. Marvel should have been promoting the hell out of their core characters who people are just getting to know in their films and introducing their diversity line in major but supporting roles.

Marvel became too heavy-handed with the diversity thing, and many fans didn’t like the total replacement of their core heroes according to some forums. Even people just going into comics because of the films will be surprised that Bruce Banner is dead and is no longer the Hulk, that Thor is a lady and that Captain America is HYDRA.

IMHO, if they wanted to replace Iron Man with a female, they could have just re-imagined the hero Spitfire (Jenny Swensen) from their 80s New Universe line. That could have gotten people excited because people are more familiar with the character instead of Riri Wiliams.

Anyway, poor sales or not, Marvel didn’t pull off the diversity very well. If they did get new fans with their diversity line, they alienated others. It reflected in their sales numbers and is now blaming their sales on their program. Many argue that the diversity thing could have been handled with better stories and a lack of emphasis on major events. Whether or not you agree that Mr. Gabriel’s statement was not in good taste, the reality is often in the sales numbers despite other factors that are difficult to quantify. He chose to listen to the retailers griping about their poor sales because their respective clientele didn’t like the diversity program.  Below are some statements of those retailers:

“I don’t want you guys doing that stuff… I want you to entertain. That’s the job. One of my customers even said the other day he wants to get stories and doesn’t mind a message, but he doesn’t want to be beaten over the head with these things.”

“When you talk about the Academy Awards, and how [inclusion and diversity] was a prime topic, I look at the cold, hard reality, and I’m in business. A lot of those movies, or other things in other media, aren’t really big money makers. For me, I care more about whether I’m going to sell it or not.”

The situation could be different elsewhere as individuals or entire areas of customers may have the opposite taste.

Anyway, Marvel may soon bring back the classics. Good old Captain America Steve Rogers, Tony Stark as Iron Man, Odinson as Thor and Bruce Banner as the Hulk. Again, IMHO, what Jennifer Walters is going through, turning pleasant She-Hulk into Savage She-Hulk is quite interesting. Whatever happens to bring the classics back could have something to do with the Cosmic Cube that turned Steve Rogers into an agent of HYDRA. But fans of the new characters won’t be left out as Marvel won’t be letting go of the characters they’ve already created.

“Discussed candidly by some of the retailers at the summit, we heard that some were not happy with the false abandonment of the core Marvel heroes and, contrary to what some said about characters “not working,” the sticking factor and popularity for a majority of these new titles and characters like Squirrel Girl, Ms. Marvel, The Mighty Thor, Spider-Gwen, Miles Morales, and Moon Girl, continue to prove that our fans and retailers ARE excited about these new heroes. And let me be clear, our new heroes are not going anywhere! We are proud and excited to keep introducing unique characters that reflect new voices and new experiences into the Marvel Universe and pair them with our iconic heroes… We have also been hearing from stores that welcome and champion our new characters and titles and want more! They’ve invigorated their own customer base and helped them grow their stores because of it. So we’re getting both sides of the story, and the only upcoming change we’re making is to ensure we don’t lose focus of our core heroes,”

What’s truly important though, is that diversity or no, is for Marvel to continue producing great stories involving their iconic characters as well as their new ones. That they strike the right balance between art and storytelling that manages to properly reflect the world’s current issues like they used to do.