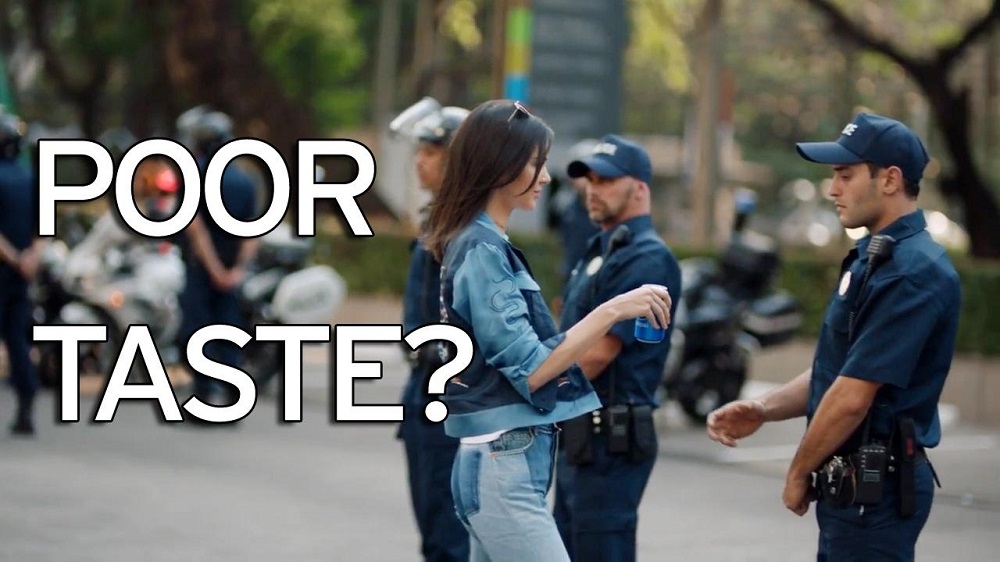 A lot of people have something to say about the failed Kendall Jenner Pepsi commercial and rightfully so. The notion that something so simple as a can of soda, delivered by a member of the most attention-whoring family in entertainment, will smooth over the hostility between protesting Americans and law enforcement in this country is laughable. There are too many reasons why this ad happened. Although Pepsi apologized to the famous socialite for putting her in “this situation,” Jenner and her clan are not without blame. I mean we are talking about a group of people who saw no issues being labeled “America’s First Family” on the cover of Cosmopolitan in 2015. Nonetheless, while the parties involved certainly share the fault for this fiasco (Jenner could have spoken up), the circumstances surrounding the commercial’s concept, creation and subsequent release all point to a lack of representation and creative diversity behind the scenes. Simply put- black folks would have told Pepsi that the commercial is indeed self-gratifying, tone deaf, and an utter HOT MESS!

I talk about representation so much because I believe it’s important not only for now but also for later. The more diverse companies become, the more younger generations will be inspired. Inspiration leads to action and action is what changes the world. In this instance, I would bet my bottom dollar that there were little to no people of color on the other side to let management know that the commercial was a bad idea. It goes to show that the lack of diversity in Hollywood is not only a problem on the screen but also remains just as important behind the scenes. In fact, it starts there. When diverse voices are a part of the creative process, the less likely superfluous, self-absorbed, and offensive material will receive the green light.

Which brings me to another subject I speak on often- privilege. Privilege makes one unaware of the realities of this world. It blinds individuals, and in this case companies, to the way things are actually happening outside their sphere of, well, privilege. It, in essence, creates oblivion. That is exactly what Pepsi is (oblivious) for using the backdrop of civil unrest as the vehicle by which to send the far-reaching message that their product is so great it can heal the wounds of police brutality, build a bridge across racial lines, and unify a hurting world. The fact that they used a white woman when women of color have by and large been the ones on the front lines, is just adding insult to injury. But again, this is what happens when there is a lack of representation.

Representation is the thing that helps everyone grasp the world in which we live a little bit better. And when it meets the kind of privilege that is willing to consider a perspective outside the privileged norm, that’s where a real conversation can happen. Case in point, my actress/writer friend recently finished a successful crowd funding campaign for a pilot she and her newly formed production company conducted. During rewrites for one of the scenes, she included some dialogue in a conversation between two black female characters where the situation in Flint, MI is referenced. After sending it to the head writer, a white male, her changes were met with criticism because he didn’t understand the purpose of mentioning the water crisis; not because he didn’t think it fit, but because he hadn’t heard about it. This is an educated man, in his 30s, who is a part of the segment of society that benefits the most from the system in place, claiming to have no knowledge of what has been going on in Flint, MI (it has been all over the mainstream news) for the last few years.

I’ll be the first to admit that it is hard to believe he had no clue that the water is poisonous, that children are suffering physically and mentally because of it and that the government officials not only knew about it but also did little to nothing to prevent or fix it. This man has not been under a shell or living in the backwoods of nowhere. He is a living, breathing part of society, in one of the meccas of American entertainment and he didn’t know one thing about the Flint water crisis. His privilege afforded that to him. But in this instance when representation (my friend) met privilege (him) it didn’t lead to mansplaining, or a denial of the facts, or a dismissal of relevance. It led to an understanding, and that led to inclusion, which is a catalyst for visible change.

Representation across all categories, gender, race, sexual orientation, socioeconomic, etc., like a host of other still pressing problems, should not be an issue in 2017. The sooner big companies and individual power players realize that, the better off all of us will be.

Saturday Night Live summed all this up perfectly with their very on-point satire of Kendall Jenner’s Pepsi commercial which you can see above.

Pepsi should not try to recreate iconic commercials like the 1971 Coke one unless they really are coming at it with the right intentions. While watching Kendall Jenner’s version, all I could think was how funny it would have been if that cop had sprayed her with Dr. Pepper flavored mace.