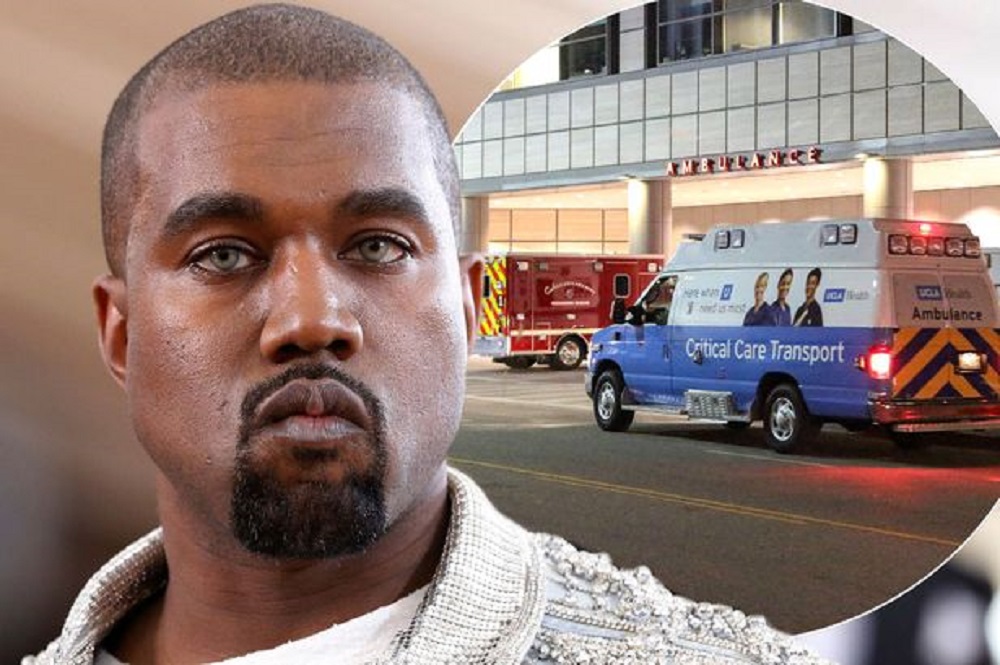 Every year for Kanye West seems to be packed with some form of controversy ending up with major headlines screaming out about his latest stunt. 2016 has been no different for the artist, but there seems to be more downs than ups this year, with the latest ones being about his odd behavior as of late.

Things turned even worse this past week when it was announced that he had to be hospitalized for ‘exhaustion,’ which says enough. Naturally, the ‘Kardashian curse‘ has cropped up once again as West is the latest man in a long list of them that appears to have been negatively affected being around the clan. We even mentioned it last March that he seemed to be unaffected so far, but sadly, his year has ended on a rather bleak note.

Hopefully, 2017 can be a turnaround for him, plus we’ll get to see if he really tries to take on Donald Trump in 2020.

It’s been a hectic year for Kanye West. There was a new album that had a tortured, months-long release. Two fashion shows that were plagued by last-minute changes and long delays. There also was the reopening of a bitter feud with Taylor Swift, an ambitious U.S. concert tour, a newborn son, and a harrowing robbery of his wife.

“When was the last time I wasn’t in a hurry,” West asks on the song “Real Friends” from the new CD “The Life of Pablo.” On another track, West admonishes his less industrious friends: “Y’all sleeping on me, huh? Had a good snooze?”

A relentless schedule and a churning life in the media glare with his wife, Kim Kardashian, apparently took their toll on the Grammy Award-winner. West was taken to Ronald Reagan UCLA Medical Center in Los Angeles on Monday afternoon for stress and exhaustion.

“In the last 12 months, there probably hasn’t been anyone more in the spotlight than Kanye and his wife,” said Bob Williams, the CEO/COO of Burns Entertainment & Sports Marketing, which specializes in celebrity procurement and music licensing.

“I don’t know any celebrity who has been under more scrutiny than the two of them are,” Williams added. “That creates tremendous pressure from the outside – expectations to perform, pressure to respond. It takes time. It takes effort.”

In the days leading to his hospitalization, West’s behavior was somewhat erratic. On Saturday in Sacramento, California, he ended his show after just four songs but not before a 10-minute tirade about Beyonce, Jay-Z, Hillary Clinton, Mark Zuckerberg, the radio and MTV.

West also flooded his Instagram account with nearly 100 fashion photos, many snaps of photos that were out of focus and poorly cropped. Then Sunday’s concert in the Los Angeles area was canceled just a few hours before it was to start; West soon decided to scrap the entire tour. Requests for comment from the rapper’s record label have gone unanswered.

Chuck Creekmur, the founder of AllHipHop.com , has met West several times and while he has no inside knowledge into the artist’s mind, he said it feels like the relentless publicity and stress of creativity may be too much.

“The lights are bright and if they are on you all the time – coupled with your own quest for immortality and greatness – I can only imagine it’s like running a marathon that never ends,” Creekmur said.

For much of 2016, West has been front-and-center, showing off his work and ideas – finished or not – like a ringmaster at a never-ending cultural circus, fueled by his perfectionist streak.

West’s year included debuting his latest Yeezy fashion line in baking heat that felled some of the more than 100 models during New York Fashion Week this fall. He was also on “Ellen” with a rambling speech that was full of name-dropping, ambition and “realness.”

He also went on Twitter to complain he was $53 million in debt. He rushed to the side of his wife after she was tied up and robbed of more than $10 million in jewels in Paris, which left her badly shaken. He melted down at “Saturday Night Live” when staffers tore out the shiny stage he had requested.

And in perhaps the most jaw-dropping act of synergy and ambition, West took over Madison Square Garden in February, spinning new tracks from “The Life of Pablo” while simultaneously debuting his third clothing collaboration with Adidas. Not only did he get 20,000 people to attend at up to $500 per seat, he also streamed it live on Tidal and movie theaters. No detail was too small: There was a list of 38 rules to which models had to adhere, including “do not act cool.”

The CD – which was going to be called “So Help Me God,” then “SWISH” and briefly “WAVES” – would actually not be released until April. West had vowed it would only be available on Tidal but backed down.

The album did produce two much-discussed cultural items – one lyrically and one visually – from a single song, “Famous.” On it, he rapped: “I feel like me and Taylor might still have sex” and took credit for her fame. It re-ignited the bitter Swift-West feud – West infamously snatched the microphone from Swift at the 2009 MTV Music Awards – and led to a furious back-and-forth between the superstars.

The video to the song only added to the firestorm. On it, West and Swift are shown naked, along with a post-coital Chris Brown, Rihanna, George W. Bush, Anna Wintour, Caitlyn Jenner, Bill Cosby and Donald Trump.

Trump would also feature in the lead-up to West’s hospitalization. On Friday, during a concert in San Jose, California, West said he didn’t vote for president but would have cast a ballot for Trump, praising the president-elect’s “method of communication” as “very futuristic.” He also spoke about his plans to run for that office in 2020, saying that he will become “a different kind of president.”

Williams, the marketing expert, said West seems to thrive on living on the edge. “There can be a fine line between being controversial and too controversial, and I think that Kanye has kind of crossed that line a few times,” he said. “It’s been a very long, busy arduous year.”