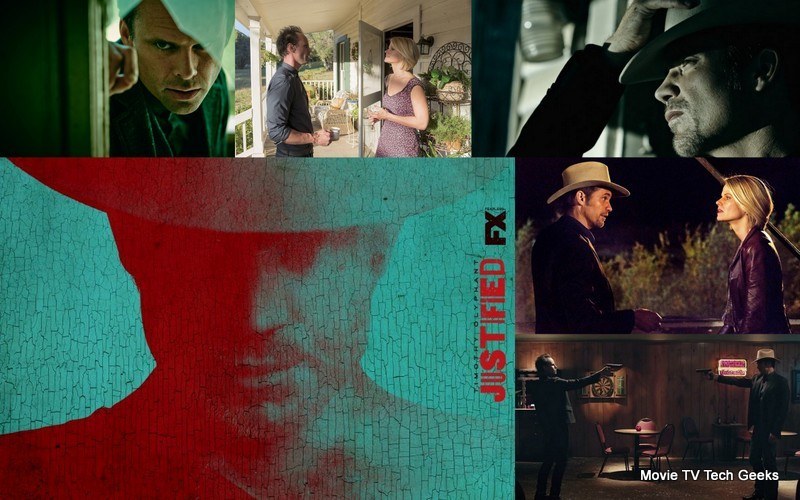 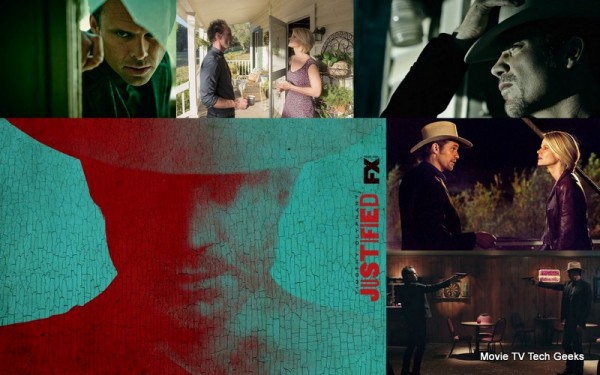 The open for the first episode of the final season of ‘Justified’ shows us Winona with Raylan’s daughter living a normal life away from Givens. She wonders aloud juts what Raylan could be doing that is so important to keep him away from the child. 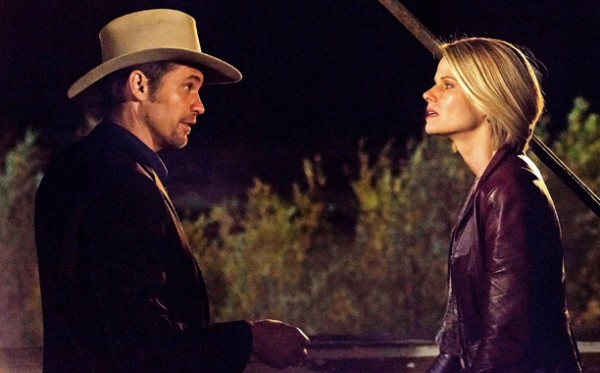 We see just what the marshal is up to as the scene switches to a sleazy bar in Mexico that has likely seen more stabbings than most prison yards. Raylan is trying to get some info on the bodies that were left in the desert in the box van. Those dead folks included Johnny Crowder of course and Raylan wants to use a local police chief to implicate Boyd Crowder in the deaths. That request for help goes poorly as you might suspect, and Raylan is basically told to go fuck himself. Givens says he will “be in touch.” He keeps his promise when he t-bones the drunk police chief in a back alley after the bar closes. He then kidnaps the Mexican police officer and hauls him back to U.S. soil as Givens continues to disregard any laws that get in his way.

Boyd holds true to the lead up from last season when his bank robbing expertise was mentioned by Katherine Hale. The spiky haired villain is sitting in a bank with a hot lady banker. Next the scene fades into the best intro song ever for a TV show. 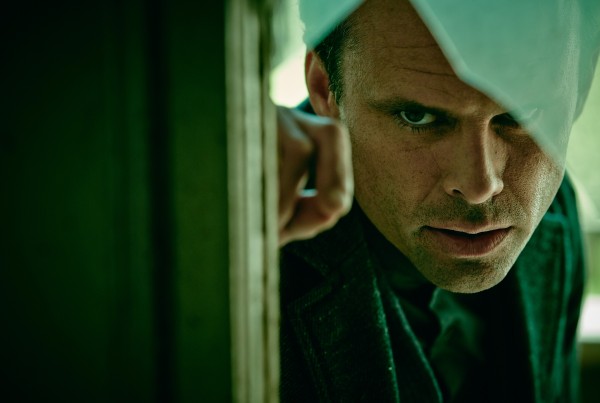 The awkward meeting between Ava Crowder and Boyd was uncomfortable at best. She is waking up in an old house and he drives up to do some construction work for her. The hot romance has certainly cooled off with Boyd letting Ava down over and over last season. 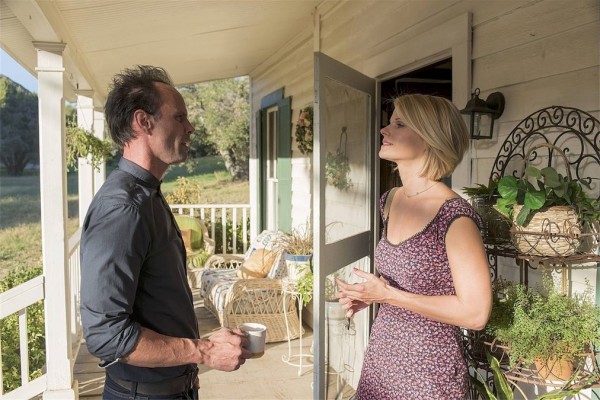 When Dewey finds his old stomping grounds at the trailer park whore facility boarded up and now the property of the state, it about breaks the man. I thought he might eat a bullet right then. It was similar to a business man finding his building chained up by a bankruptcy court order. But Dewey is pretty resilient to be so stupid. He finds a little turtle trinket and takes it as a sign. He heads to a diner and finds one of his old hookers there as a waitress and takes that as another sign.

Poor Ava has to go back to work at the beauty salon after dreams of a millionaire’s life with Boyd. Boyd tells her that Harlan is soon to be a ghost town and them with it if they don’t get out. He talks about a big score that could take them to Costa Rica or anywhere she likes. As always, Boyd is thinking big. But there is nothing stopping him from heading there now. A smart guy like him doesn’t need a pile of cash to leave the country. He could have his lovely Ava with him at some great beach getaway. All he need do is go. But he doesn’t see it that way.

Later at the bar, Boyd finds Dewey Crowe there to see him asking for work. Crowe has taken these signs to mean he needs to go back to work for his former employer. Bad idea.

Raylan and Tim are at Arlo‘s old house discussing the surveillance they are doing on Boyd. They get a visit from a high roller in a Mercedes looking to buy the property….with a suitcase full of cash. They do things a lot different in Harlan. Around my town people set up appointments with real estate brokers and banks generally. Raylan sends the man on his way after giving him and us a brief history of the place. This episode really made us aware of the Harlan starting points and the men that got the town going. They are likely setting the scene for a comparison to the way parts of America have been turned into deserted areas full of economic woe.

A local drug dealer, Cyrus, gets a shovel to the face as Raylan and Tim set him up. His absence forces Boyd to let Dewey get back in the gang to an extent. He isn’t going to be trusted with much responsibility clearly. He can’t be trusted and he is as dumb as ever. Boyd knows he is being watched by the Feds so he needs Crowe as a diversion. Boyd has his sights set on the bank he visited earlier in the show and Dewey is to lead the marshals on a goose chase, though the weasel thinks he is hauling some important drugs no doubt. A roadblock only temporarily stops Dewey. He speeds off only to have his tires shot by the state police. He wrecks the truck of course as Raylan along with Tim go check on him. By check on him, I mean shake him down and break his jaw as they find he is indeed a decoy.

Boyd had used this distraction to the marshals to get his bank heist rolling. He and a small crew pop a few shotgun blasts off in the bank lobby, then proceed to hook up a truck wench to the safe deposit wall. They only take a few select boxes though and head off in the clear. Obviously Boyd is using his big criminal brain for something larger than a few thousand dollars that could have been his easily. Although that small amount would have been plenty for him and Ava to get to a beach paradise if that’s what he really wanted.

Raylan is none too please with Ava as they meet on the bridge. He tells her that she will be going back to jail if she lets him down again with no info. She didn’t know about the bank job and tries to convince Givens of that. He sort of believes here but lets her know that matters little. If she doesn’t help or has no ability to help his case the result will be the same, prison. Raylan tells Ava that she has the ability to get Boyd to tell her his plans. He reminds her of how she set up her first husband, Bowman Crowder and lulled him into a false sense of security…right before she killed the man at supper time. Her favorite time to shoot a man.

The last scene with the hero shows Raylan visiting Art who is still recovering from his gut shot. Art paints a bleak picture for Givens, telling him that he needs to do things by the book instead of only thinking about killing Boyd. He also tells Raylan that he could be the one who winds up dead in such an exchange, which Raylan seems unable to fathom.

The final scene of this episode ended up being the last one for the little weasel Dewey Crowe. He had a hell of a run on this series for a criminal that had a super low IQ. Dewey wanted to reminisce about the old days and Boyd’s original gang. Boyd Crowder seemed to go along for the stroll down memory lane as he told Dewey about the picture on the wall of his family and how they helped start the town of Harlan. As Dewey tried to find the look in the men’s eyes in the photo, mentioned by the silver tongued Crowder, Crowe gets his brains splattered all over the historic photo. 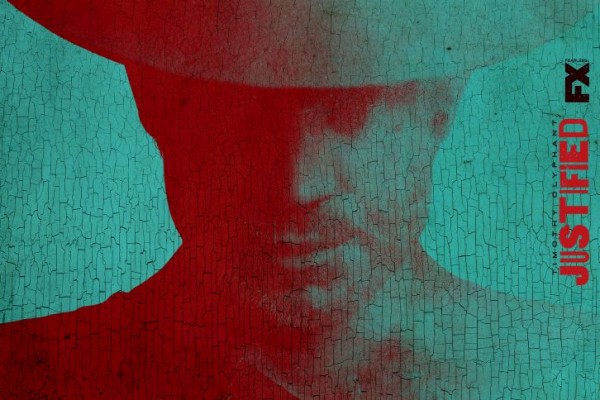 This season will likely see a lot of bloodshed as the town refuses to go away quietly into ghost town mode. Boyd certainly showed a cold hearted side this scene, whacking a guy that had not even given any info up on him yet. That leads us to believe he would kill Ava without too much hesitation if he found out about her and Raylan’s bridge conferences. One thing is sure. Not everyone is making it out of their final season intact.