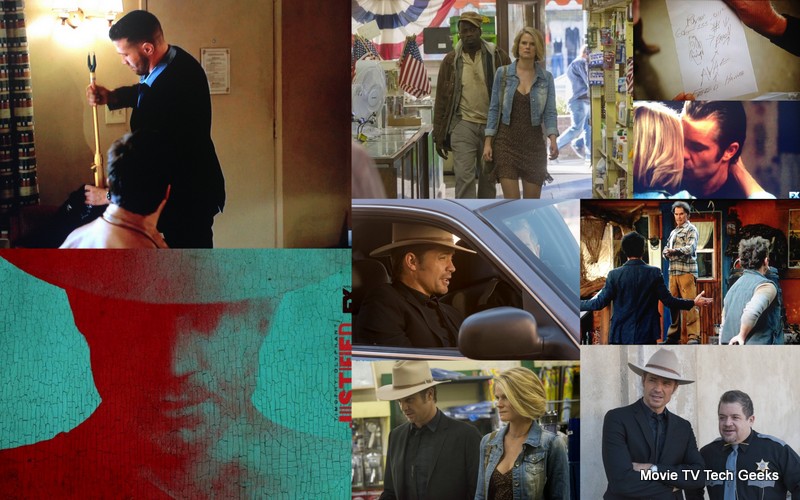 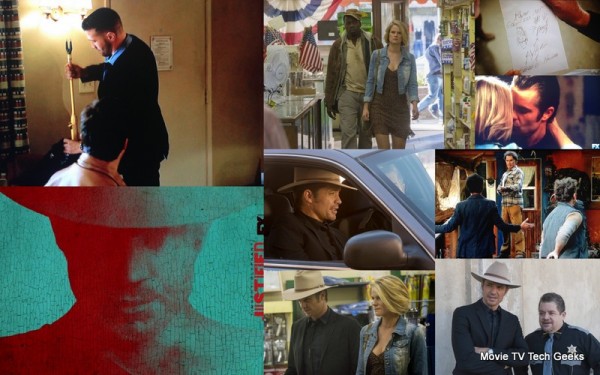 Many would say this week’s episode of Justified was a waste of time. It was entertaining, but Ava ended up in the same spot as when it started….in a mess and cooking supper for Boyd. 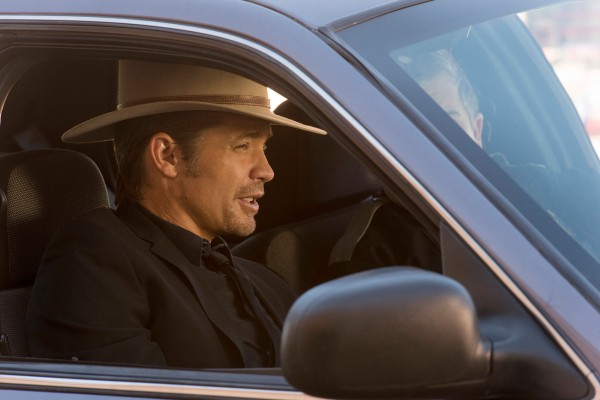 To start out, on Boyd and Ava’s drive back to their house, the career criminal is once again giddy over the prospects of farming marijuana in Harlan. Big plans for a guy with shallow pockets. They run into a road block and pass through. It was set up by Raylan just to get a feel for how Ava seemed and if she was in immediate danger. She certainly needed checking on as we saw Duffy and Hale discussing her fate in the next scene. The evil Ms. Hale says it would be a “shame to have to kill her.”

What a shame it would be to kill the perfect looking country girl who can cook up a mean breakfast for her man. Boyd puts the diamond back on Ava’s finger before he dives into the breakfast fit for a king. She heads off to work, her story to Boyd anyway. She actually calls Raylan and gets back to being jumpy as ever. She seems to think he can just deliver her some cash and she can bounce. That’s not the case and it appears the Marshal Service is going to milk her for every ounce of intel she has before they are done with her. She senses that too so she ditches her phone and heads off to her old buddy Limehouse. 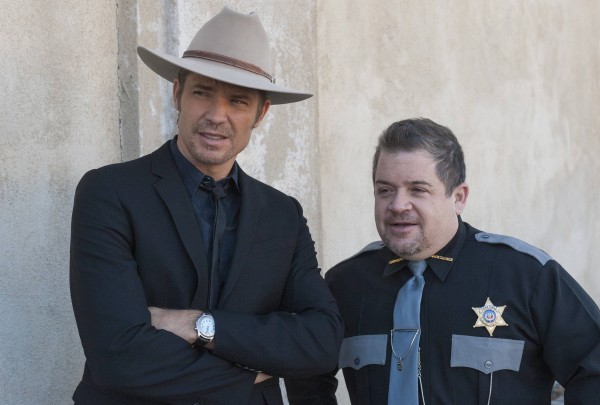 As Tim and Rachel track down the slimy prison guard Albert, Mike and Duffy play a little scrabble. I guess Boyd and his guys play ‘Connect Four‘ in their down time. Meanwhile Constable Bob Sweeney is contacted by Raylan to get help checking on Ava. Bob is one of the best occasional characters on Justified and he nailed it again this go around. He is smitten with Ava from high school memories. Who isn’t? 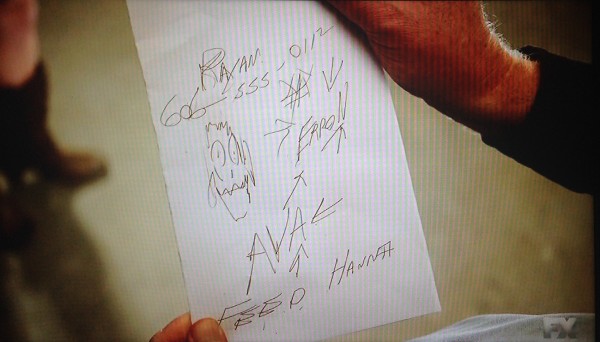 Ava is in need of a car and apparently Limehouse is the only way that can happen?  No CarMax in Harlan? I’m not sure why this was even part of the plot, other than to have his goon Errol drive Ava around for a while to waste time on a buried treasure chase. Ava could surely have gotten a car somewhere else. She simply has no clue how to get away from Harlan. She keeps messing with the same people who have only gotten her deeper into trouble. 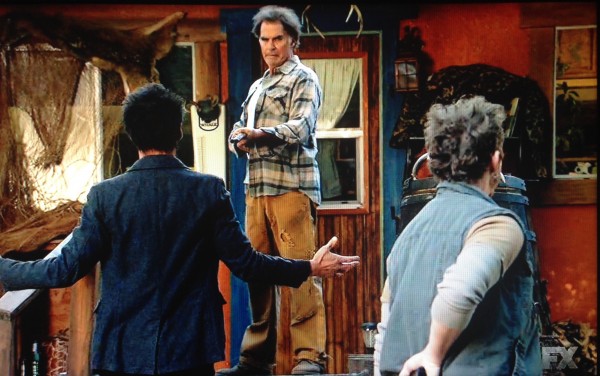 Markham’s little crew is discussing why all the landowners keep refusing their cash. They know someone is talking them out of the deals. Markham shows up and is pretty pissed at Walker. He wants to find out how all the landowner names were found out. Walker is about to say something that might make things worse for the situation, but Markham wants to hear none of it. He just wants the job done. Walker was maybe going to say how it was Hale who let the cat partially out of the bag. 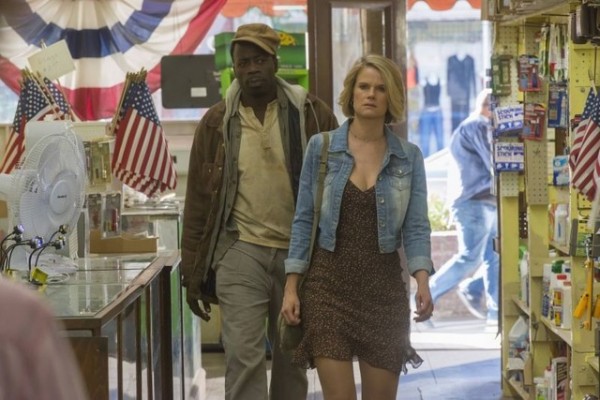 Boyd gets Ava’s uncle to help him with a mine shaft issue while Ava is rolling around with Errol. Her dumb plan now involves stopping for a shovel to dig up the nonexistent money. They end up at a hardware store where she tries to ditch him. Why even ask for their help if this is as far as she was going to get? Ava needs to work on her plans a bit more. Perhaps some chess lessons would help. 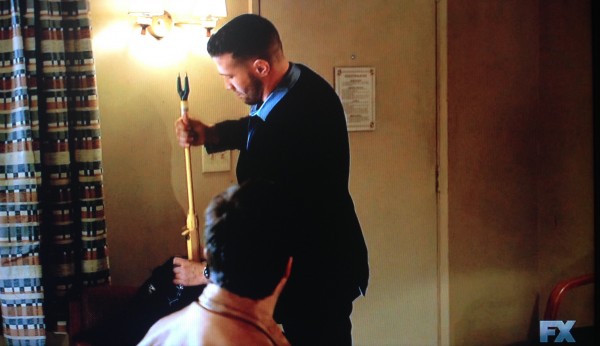 The slimy prison guard Albert is visited by Duffy and his Scrabble playing partner Mike, and Albert is really “aplexed” once the cattle prod comes into play. The duo wants Albert to tell why he came clean about what he did to Ava in jail. To the little bastard’s credit he took the torture like a man and didn’t rat her out as an informant. Tim and Rachel were watching from a door away in case his life was in danger…I think. They sure let him endure a lot of pain. Maybe they were there in case they needed to kill Duffy and Mike and not really to do much saving of a pig like Albert. Ava’s secret remained safe though as the Scrabble team left him after believing his story.

The best scene came when Raylan enlisted Constable Bob to detain Errol so he could get Ava back to Boyd without blowing her cover. Bob is confident with Raylan by his side, but a little nervous on his own. He asks how to detain the big man, to which Raylan replies, “You got a badge and a set of balls don’t ya.” Bob does indeed have a badge and “death star like balls”, so he does his job. Errol ain’t trying to hear no talk of a warrant so Bob eventually has to tase him, which makes the big man a bit easier to handle. Raylan escorts Ava away quietly. Once again Bob saves the day.

Seabass and Choo-Choo pay our friendly neighborhood real estate guy Calhoun a visit. They intend to find out what info he has given up and to whom about their land grab. This goes poorly. Choo-Choo kills the man with a haymaker that ends with Calhoun’s head bouncing off the floor and having no pulse. Seabass only wanted a “starter tap” as he admonishes the big man. He tells Seabass, “If you wanted him hit like a girl, you should have done it.” This guy is awesome! 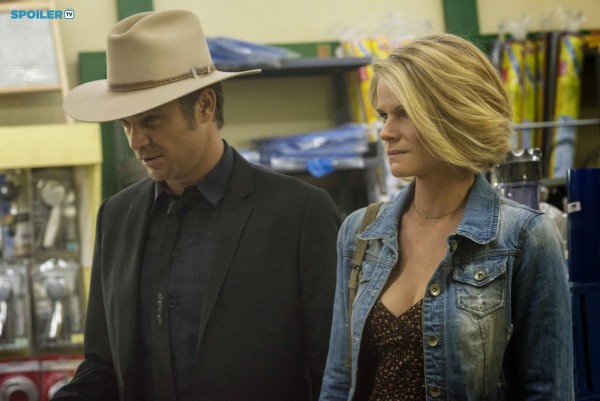 So at the end of the episode, Ava ends up right back where she started. Raylan has her home and she is ready to fry up some chicken for Boyd, who may or may not end her supper cooking for good this season. Her day’s efforts were less than fruitful clearly. She just wants to get to another country with a little cash. Raylan promises her that he’ll make it happen. The perfect country girl leans in to kiss the Marshal as he now may appear to be her only salvation. She can’t save herself so she has no choice to put her life fully in his hands. Boyd calls to break up the moment between the former lovers. Ava suggests Raylan leave as Boyd will be back soon. Shockingly, the hero says, “If you don’t mind, I was thinking I would stick around for a bit.” I shouldn’t be too shocked. Ava is near perfect and Raylan is a U.S. Marshal, not an angel. And Winona is far, far away. 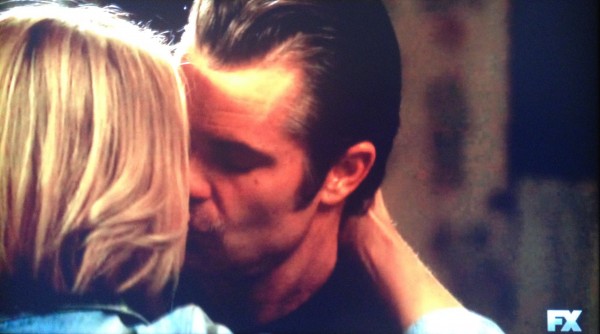 While the plot didn’t move too far forward, the last scene did present some new options for the rest of the season. Would Raylan go all in with Ava as she escapes to a new life abroad? I doubt it, but I can see them having one last fling to spice things up. Raylan’s going to be Raylan, but he’s not going to ditch his baby girl in Florida. And what Winona don’t know, ain’t gonna hurt her.