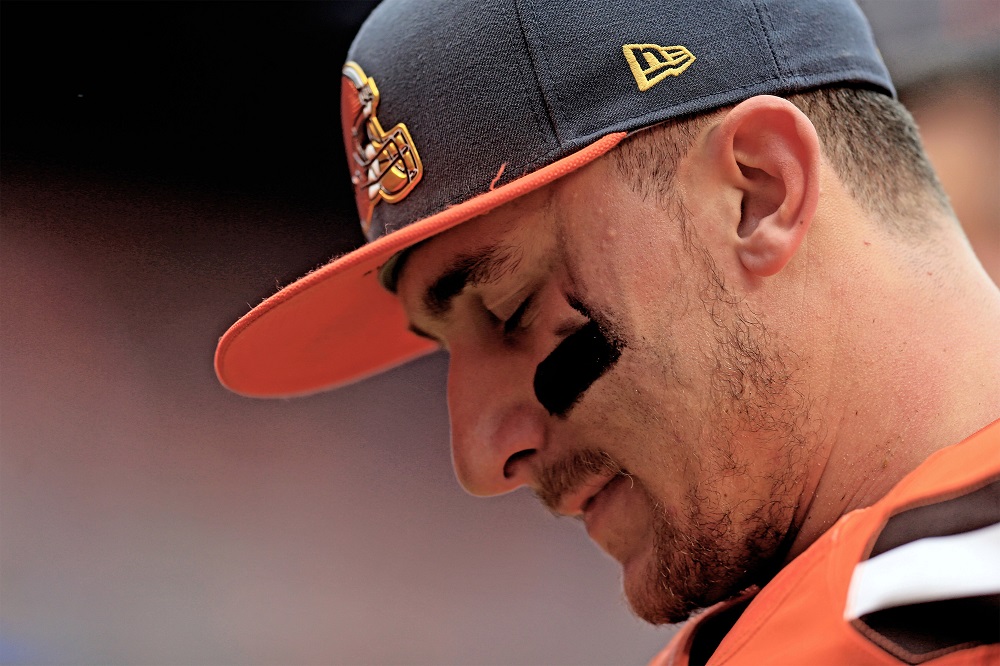 After a good year of negative publicity, drunken parties, and nothing promising from the former Heisman Trophy winner, Johnny Manziel seems to be doing significantly better. TMZ posted a video of the former Cleveland Browns quarterback who appears to be handling himself well now. Manziel is sober, training to get back on the field, and making calls for the upcoming Conference Championship Games.

“It’s hard to go against the GOAT, Tom Brady,” said Manziel, when asked who he’d like to see in Super Bowl LI in Houston. “I’m a big Kyle Shanahan guy. I’m pulling for Matt Ryan, it’s been a rough playoff run for him. I hope he pulls it off.”

There’s a reason Manziel mentions Shanahan. The former Browns offensive coordinator spent the 2014 season with the rookie first-round selection, and he and Manziel actually got along pretty well.

“I was with Johnny for eight months, and Johnny is a very good guy,” said Shanahan in June. “Johnny worked as hard for me as anybody. Everything I asked him to do, he did. He was very humble. He did not think he had all the answers. He knew he had to work.”

With Shanahan likely to take over as head coach of the San Francisco 49ers after this season, maybe Manziel will have a shot fighting for a roster slot. Manziel claims he’s been working out “five to six” times per week to get back into football shape, and he’s looking to give it “another run.”

He went on quite the Twitter marathon reaching out to fans:

Haven't been this happy in a long time man. I appreciate all the people in my life who reached out during the truly rough patches in '16

No lie.. I was a douche in 2016 I'm just trying to be a good PERSON again#LostInTheSauce

Have to LIVE these words not just TWEET them ✌🏼

In the meantime, however, Manziel will be cheering for the Falcons and Patriots this weekend, and he may even attend the big game. Manziel will already be in the Houston area for an autograph signing and photo-op. I know he’s a former Heisman winner and everything, but I’m not sure that I’d pay $99 for an autograph.

Just had this brought to to my attention. I'm not charging a penny for a damn "selfie" at the super bowl. Dumbest thing I've ever heard

Now that the media has picked up on this, Manziel is suddenly saying that he had no idea of the ‘selfie charge.’ Stadium Signatures has not taken down their Facebook announcement with those charges still listed. After contacting them about the event and pricing, we were told that nothing has changed. So either Manziel doesn’t want to admit that he’s down for his remaining fans paying for a shot with him or Stadium Signatures are in the wrong. They seem to be pretty confident in their even and prices, so I’d go with the former.

At least Johnny Manziel can make some money to make up for all that he gave with his life choices.