You can bet Jack Conger and Gunnar Bentz are regretting their early Sunday morning outing with Ryan Lochte after they were pulled from their plane twenty-four hours ago by Brazilian authorities. The two American Olympic swimmers were on their way home Friday after testifying about an alleged robbery that shocked and then deeply angered Brazilians when police said the story was made up.

Ryan Lochte has already hired a crisis PR manager, but as this mess is looking to be his fault, will he share the services with the rest of his swim teammates?

Their departure came hours after police announced that Ryan Lochte and three of his teammates had not been held at gunpoint after a night of partying, as he claimed. Instead, police said the men, while intoxicated, vandalized a gas station bathroom and were questioned by armed guards before they paid for the damage and left.

The saga – which became the biggest spectacle outside of the Olympic gates – was an embarrassment for American Olympians, who had otherwise dominated the games. It also deeply wounded a country eager to prove it could host the first games in Latin America despite concerns it could not keep athletes and spectators safe from rampant street crime.

“No robbery was committed against these athletes. They were not victims of the crimes they claimed,” Civil Police Chief Fernando Veloso said during a news conference.

As two of the swimmers, Gunnar Bentz and Jack Conger, were whisked through airport security and onto a plane Thursday night, their attorney insisted they had nothing to do with Lochte’s story. Lochte left the country earlier this week. 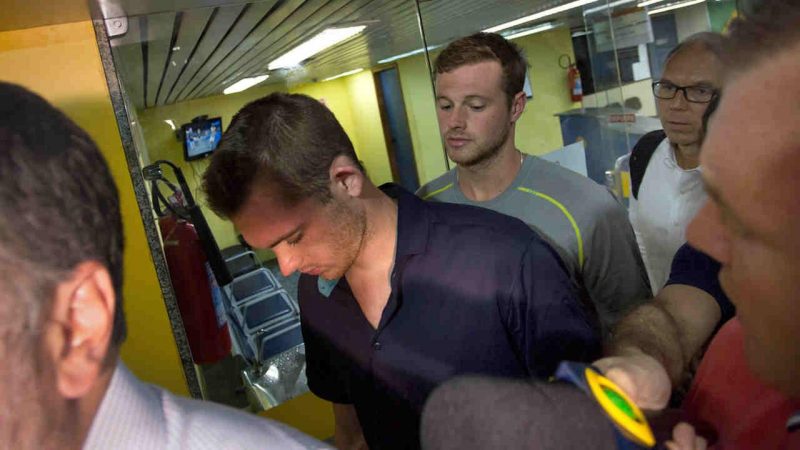 Bentz and Conger “were heard only as witnesses. This has to be made very, very clear,” lawyer Sergio Riera told media outlets. “They did not make any untruthful testimony. They did not lie in their statements.”

Another swimmer, James Feigen, was hoping to get his passport back to leave the country as soon as possible. A decision on his departure was pending. 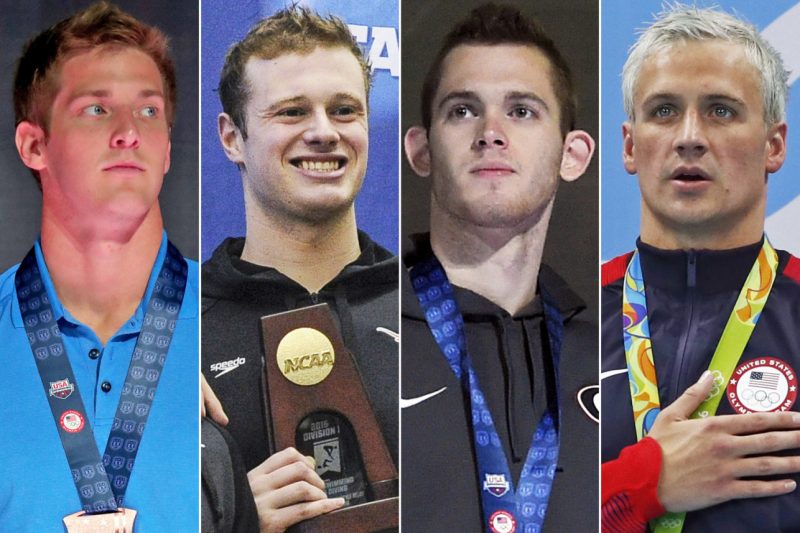 Though police appear mostly finished with their probe, the case is far from settled. Police have said they are considering charges of falsely reporting a crime and destruction of property, both of which can carry up to six months in jail or a fine. Lochte’s attorney has insisted the story wasn’t made up – but neither he nor Lochte commented on the police account after it unfolded.

The saga began when Lochte said that he and Conger, Bentz and Feigen were held at gunpoint and robbed several hours after the last Olympic swimming races ended. That claim began to unravel when police said that investigators could not find evidence to substantiate it.

Then, security video reviewed by police confirmed the athletes vandalized parts of the gas station, leading to an encounter with station employees.

The video shows one of the swimmers pulling a sign off of a wall and dropping it onto the ground. A gas station worker arrives, and other workers inspect the damage. Veloso said the swimmers broke a door, a soap dispenser and a mirror.

The swimmers eventually talk with station workers and their cab leaves. In another sequence, the swimmers appear to briefly raise their hands while talking to someone and sit down on a curb.

After a few minutes, the swimmers stand up and appear to exchange something – perhaps cash, as police said – with one of the men.

The footage doesn’t show a weapon, but a police official speaking on condition of anonymity because the investigation was ongoing said two guards pointed guns at the swimmers. Veloso said the guards did not use excessive force and would have been justified in drawing their weapons because the athletes “were conducting themselves in a violent way.”

A station employee called police, and the guards and employees tried to get the swimmers and the taxi driver to stay until authorities arrived, some even offering to help interpret between English and Portuguese, Veloso said. But he said the athletes wanted to leave, so they paid 100 Brazilian reals (about US $33) and $20 in U.S. currency and left.

Police said the swimmers had been unable to provide key details in early interviews, saying they had been intoxicated. The police official said officers grew suspicious when security video showed the swimmers returning to the athlete’s village wearing watches, which would have likely been taken in a robbery.

Bentz and Conger told police that they felt Lochte had lied about the situation in media interviews, according to the text of the statements released by Rio police.

“And then the guy pulled out his gun, he cocked it, put it to my forehead, and he said, ‘Get down,’ and I put my hands up, I was like ‘whatever.’ He took our money, he took my wallet – he left my cellphone, he left my credentials.”

The debacle prompted both wild speculation and social media mockery, which quickly turned to scorn after the official account went public. #LochteGate trended on Twitter, with users sharing video footage and posting comments about white privilege and rude Americans.

David Fleischer, a political scientist at the University of Brasilia, said the incident touched a nerve in Brazil because of the country’s history and cases of people committing crimes while impersonating police.

“The story did have some sense of validity, but it didn’t bear out, and it made them look bad worldwide,” he said.

That outrage was evident Thursday, as onlookers shouted “liars” and “shameful” at Bentz and Conger as they left a police station where they gave statements.

While he’s often medaled, Lochte’s accomplishments have long been overshadowed by teammate Michael Phelps – the most decorated Olympian in history. Lochte, a 12-time medalist, won gold in Rio in a relay race alongside Phelps.

Lochte and the other swimmers could face sanctions from USA Swimming, including fines or suspension. The group, as well as Olympic officials, publicly expressed disappointment and said they would further examine the matter.

“We apologize to our hosts in Rio and the people of Brazil for this distracting ordeal in the midst of what should rightly be a celebration of excellence,” the U.S. Olympic Committee said.