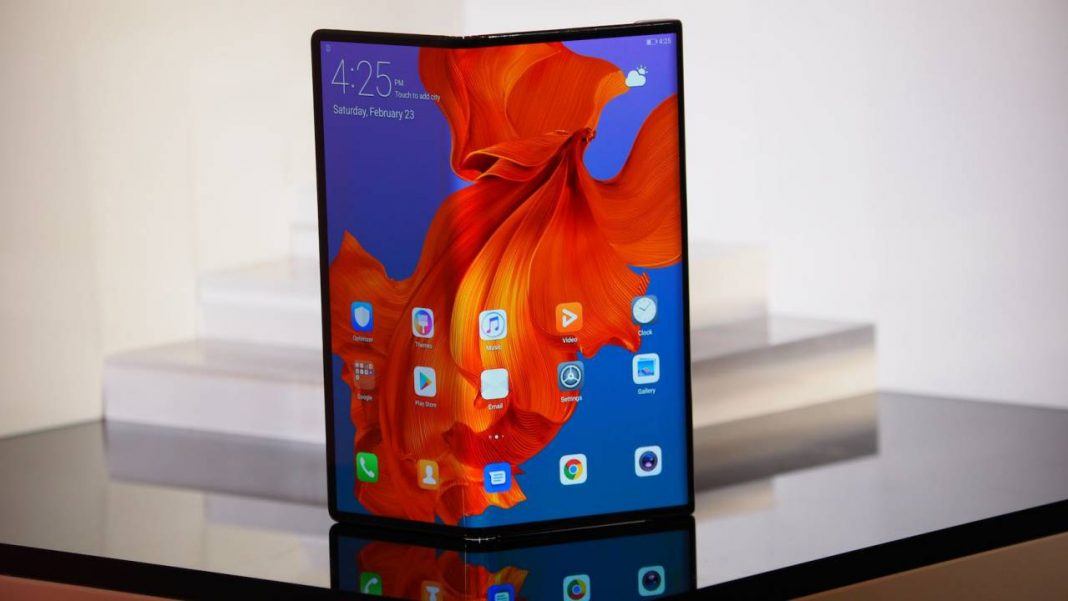 Samsung and Huawei are duking it out to be the king of the folding smartphone with their Galaxy Fold and Mate X. As we reported last week, Samsung is expecting a lot of their customers treating the Galaxy Fold more as a paid beta program, but Huawei is coming to market with a fully functioning model that could win the war. The only problem is the intense battle the company is having with the U.S. which you can read about further down.

While the idea of an expensive smartphone that folds might sound unnecessary, once you get your hands on one, you’ll change your mind rather quickly. This is easily the tablet killer as it’s a real phablet or phone-tablet hybrid. The folding or bendable phone now adds a whole new look and feel for the market. Don’t be shocked to see one that can wrap around your wrist like a watch without being an Apple Watch, although the price will probably be similar.

Huawei revealed its Mate X phone on the eve of MWC Barcelona, a four-day showcase of mobile devices, as the company battles U.S. allegations it is a cybersecurity risk.

The device can be used on superfast next-generation mobile networks that are due to come online in the coming years.

Device makers are looking to folding screens as the industry’s next big thing to help them break out of an innovation malaise, although most analysts think the market is limited, at least in the early days.

The Mate X is the answer to a question Huawei faced as it sought to satisfy smartphone users’ demands for bigger screens and longer battery life, said Richard Yu, CEO of its consumer business group.

“How can we bring the more big innovation to this smartphone industry?” Yu said at a glitzy media launch.

The Mate X’s screen wraps around the outside so users can still view it when it’s closed, unlike the Galaxy Fold, which has a screen that folds shut. Unfolded, the Mate X’s screen is 8 inches diagonally, making it the size of a small tablet.

“No matter how innovative and technology-advanced the new device is, it will take a lot more time for a critical mass of consumers to experience the benefits of foldable phones and 5G technology,” Forrester analyst Thomas Husson said. Huawei still “has to find its own brand voice to differentiate from Samsung and Apple and stop acting as a technology challenger.”

Huawei Technologies is trying to raise its profile in the fiercely competitive smartphone market. Almost everyone with a smartphone has heard of Apple and Samsung, the top device makers, and Google, the power behind Android’s pervasive software.

Huawei, a Chinese company with a name many people in the West don’t know how to pronounce (it’s “HWA-way”), wants to join the market’s upper echelon.

It’s getting close. Samsung was the No. 1 smartphone seller for all of last year, followed by Apple, according to research firm International Data Corp. Huawei came third, though in some quarters it took second place, IDC data showed.

The company stealthily became an industry star by plowing into new markets, honing its technology, and developing a line-up of phones that offer affordable options for low-income households and luxury models that are siphoning upper-crust sales from Apple and Samsung in China and Europe.

But Huawei’s products are few and far between in the U.S. The scarcity stems from long-running security concerns that the company could facilitate digital espionage on behalf of China’s government. Washington has been lobbying European allies to keep its equipment out of new 5G networks.

The cloud over Huawei also includes U.S. criminal charges filed last month against the company and its chief financial officer, Meng Wanzhou, who U.S. prosecutors want to extradite from Canada. They accuse her of fraud and say the company stole trade secrets, including technology that mobile carrier T-Mobile used to test smartphones.

Huawei is making its push at a time that both Samsung and Apple are struggling with declining smartphone sales amid a lull in industry innovation that is causing more consumers to hold on to the devices until they wear out instead of upgrading to the latest model as quickly as they once did.

The company sells high-priced smartphones as well as an extensive range of cheaper models priced from $200 to $600 that offer a good camera and other features most consumers want, analysts said.

But Huawei wouldn’t be where it is today if it had been content focusing merely on China and other Asian markets.

The company took a huge step forward several years ago when it began pouring millions into promoting its brand and building partnerships in major European markets such as Germany, France, Britain, Spain and Italy. Research firm Gartner estimates it now sells about 13 percent of its phones in Europe.

As for the U.S., Huawei can only make so much headway as long as the government is casting the company as a cyber-villain, said Gartner analyst Tuong Nguyen.

“Brand building is a long-term exercise, but it’s going to be especially difficult in the U.S. because of the way they have branded all of China,” he said. “The barriers in the U.S. are just getting more difficult.”

China and U.S. Fight Heats Up Over Huawei

A global battle between the U.S. government and Chinese tech company Huawei over allegations that it is a cybersecurity risk overshadowed the opening Monday of the world’s biggest mobile industry trade fair.

Huawei has an outsize presence at MWC Barcelona, from its displays in three separate show halls down to its red sponsorship logo adorning visitor pass lanyards. The focus at this year’s meeting is new 5G networks due to roll out in the coming years. But the dispute over Huawei, the world’s biggest maker of networking gear, is casting a pall.

The United States government dispatched a big delegation to press its case with telecom executives and government officials that they should not use Huawei as a supplier over national security concerns. U.S. President Donald Trump’s administration says the Chinese government could use Huawei equipment to snoop on the world’s internet traffic — accusations Huawei has rejected, saying there has been no proof of a cybersecurity breach.

In a fresh salvo, 11 U.S. senators on Monday called for the federal government to ban solar power inverters — advanced control systems — made by Huawei, saying they pose a national security threat to U.S. energy infrastructure.

Huawei’s counteroffensive includes making its case directly to government officials, companies and journalists. It has unveiled a new folding 5G phone and its executives are speaking on keynote panels at the show. Formerly known as Mobile World Congress, the show is a key forum for lobbying and deal-making that’s expected to draw 100,000 visitors.

“The geopolitical tensions between the U.S.A. and China will undoubtedly be a hot topic,” said Shaun Collins, CEO of research firm CCS Insight. “There is little doubt that operators around the world are concerned that draconian sanctions on their ability to use Huawei’s 5G infrastructure could have detrimental effects on their 5G roll-out plans.”

Behind closed doors, U.S. officials have been suggesting that Ericsson of Sweden and Finland’s Nokia should be preferred suppliers, but telecom providers like Huawei for its cheap but good quality equipment. That helps lower the cost to customers of using new 5G networks, which promise lightning fast download speeds and less signal lag — advancements that will help develop self-driving cars, factory robots and remote surgery.

Trump tweeted last week that he wanted the U.S. to catch up in the 5G race through competition, “not by blocking out currently more advanced technologies.” Though he didn’t mention China or Huawei, the comments could be seen as a more toned-down approach to the company, which has long been blocked in the U.S.

Guo Ping, one of three Huawei executives who take turns as chairman, told reporters Sunday that he read Trump’s tweet as an admission that the U.S. needs faster internet networks and is lagging in this respect.

Guo stressed that his company “will never allow for backdoors in our equipment,” and it would never violate laws and regulations in countries where it operates.

U.S. allies in Europe are still making their minds up on allowing Huawei gear in 5G networks and it’s not clear if Washington’s lobbying campaign is having an effect, with some viewing it as a calculation of technical risks rather than as part of a broader battle for tech supremacy between China and the U.S.

“As we talk to our customers, they are feeling the uncertainty and they are concerned,” Ekholm said at the MWC show.

A ban on Huawei could delay the rollout of 5G in Europe by two years, said Nick Read, CEO of Vodafone, one of the world’s biggest mobile operators.

The “implication is suddenly you’ve got to do a massive swap of equipment. Hugely disruptive to national infrastructure, consumers (and) very, very expensive,” he said.

GSMA, an association that represents 750 mobile operators worldwide, is recommending a testing and certification regime for Europe to ensure confidence in network security.

Guo called for the industry and governments to develop “clear and unified” cybersecurity standards and regulations, and said decisions should be made by technical experts rather than politicians.