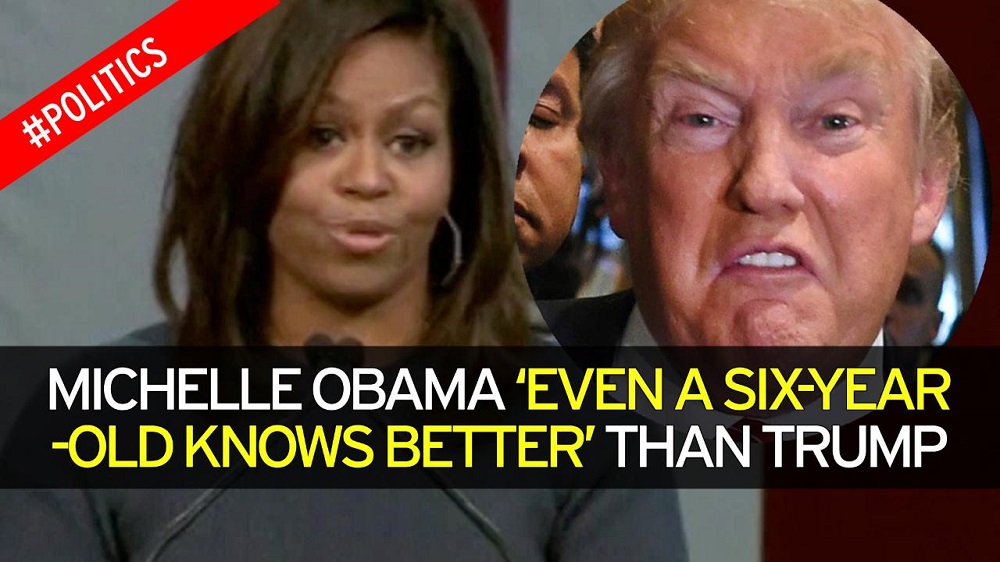 This week’s hero is our first lady for her spot on speech about Donald Trump. The zero is a Trump spawn who looks to be the splitting image of his father.

I can never make Michelle Obama the hero enough. This woman is an example, not just to women of color or Democrats, but to all women in how she conducts herself, dresses and continues to unapologetically stand for what she believes. She is indeed this week’s hero for her speech during Hillary Clinton’s New Hampshire rally in which she pretty much took down Donald Trump.

People, even Glenn Beck, have praised the first lady for her speech in Manchester last week. Many experts hail her brutal and very honest criticism of the GOP candidate as a potential turning point in the presidential race to the White House. Beck, a popular conservative talk show host, had this to say about it,

He goes on to say that her speech can have “devastating effects” not only on Donald Trump but also on the “conservative movement.”

This is a big deal for someone like him to say that about Michelle Obama. Her words were moving, and they were relatable.

“I can’t stop thinking about this… It has shaken me to my core in a way that I couldn’t have predicted… No woman deserves to be treated this way.”

She perfectly used her influence to put things into perspective. So much so that political strategist Paul Begala (and others like him) said, “Michelle Obama’s speech will be one of the things people study 100 years from now… It was that powerful.”

I am very proud to call this woman my first lady, and it breaks my heart that she will no longer hold that title come January. I trust that she will continue her fight for women’s causes nonetheless.

For telling it like it is and rallying women on both sides of the aisle, Michelle Obama is a hero.

Well, what do you know; the apple doesn’t fall that far from the tree. One of the good things about this presidential election is that it is definitely showing the world who Donald Trump and his family truly are. A lot of people already knew about their scummy ways, but for those of us who now have to pay attention because he is vying for the top spot in our country, it is a great indication of the type of people we are dealing with here. This week’s zero is Donald Trump, Jr. because apparently, he holds to the same damaging rhetoric that women should just accept harassment and deal with it.

Lately, years old tapes have surfaced of Trump and now his son, saying some sexist things about women. In one of the many recordings, Trump Jr. is heard pretty much saying that if a woman can’t take the heat, well, then she needs to get the hell out the kitchen. During a 2013 episode of The Opie and Anthony Show, he said,

This is frightening because to me it proves that Trump and his asshole offspring are raising more asshole offspring. He goes on to mock women in the interview, and the hosts don’t make it any better. This is what we are getting as a first family people. If Trump wins, we have to deal with four years of an administration whose view of politics aren’t that far from their view of the world. A world that places rich, white men at the top and everyone else someplace beneath them. But what more can you expect from men who have had every single thing in their lives handed to them? Those that argue differently are missing the fundamental fact that the use of one’s privilege (race, money, status, position) is a great determiner of the kind of person they will become.

For being like his father and clearly having no respect for a woman’s right to not want to deal with harassment, Donald Trump, Jr. is a zero.