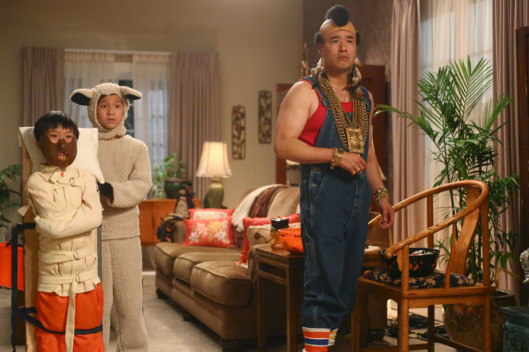 It’s Halloween on Fresh Off the Boat and the Hung’s look forward to celebrating their first fright night in Orlando.

Jessica is super excited about their fixer-upper, which is in the process of being renovated by Honey’s contact. While she talks to her mother in law about it, who reminds her that they are still partners, Louis comes in with Halloween costumes for them and Jessica, needless to say, is not feeling it. She hates the tradition and would rather make money.

In the yard, Eddie and his boys map out their trick or treat route for the night of Halloween. They also go over their costumes, and he is determined to go as one of his favorite rappers of the nineties.

Jessica goes to see the renovations and is more than happy about the work. The guy suggests that she gets it treated for termites, and she tells him, “Thanks but no thanks,” and tears the card he handed her up… right in his face. Then, because he doesn’t want to go over to his truck because fourteen boys sit on the grass in front of it, Jessica takes it upon herself to stand up to them since they make fun of adults as they walk past. She shows them who’s boss, telling them they need to stop because no one cares what they think. They get back at her by drawing a picture of a penis in the dust of her car the next day. She is livid and pulls her belt off to whip them, but Honey stops her. I mean, she takes off her shoe and even throws tic-tacs at them. As they get up to leave, they let her know that they plan to come back on Halloween and egg the house.

Back at the house, Louis is bummed when Evan and Ethan tell him that no one trick or treats on their street because it’s a dead zone, and the homeowners association won’t allow it. So he demands to be put on the agenda for the next meeting.

At the meeting, Ethan runs it (interesting), and Louis gets up to tell the ladies that Halloween is all about losing yourself and creating a whole new identity. So their neighborhood should not let the allure of the Disney imaginaries’ stop them from creating their identity that one night. And thanks to his speech (he borrows from Field of Dreams) in which he tells him “If you build it they will come” they agree. So for the first time in a long time, the neighborhood has Halloween.

Halloween comes, and they all go all out. Evan is Hannibal Lecter, Ethan is a lamb and Eddie is Humpy Hump from digital underground. Oh, the 90’s. Jessica tells Louis to come with her to the investment property because the neighborhood boys plan to egg it. He says it’s all good because that’s what kids do on Halloween, which pisses her off and is the reason she hates the night- “It’s just an excuse for bad behavior.” She goes and, of course, takes Honey.

They stand guard at the house, but Honey gets picked up for a Halloween party and leaving Jessica to ward off the boys herself.

Eddie and his friends stroll the neighborhood trick or treating having a good time. Then Louis, who feels bad about enjoying Halloween without his wife, picks them up so that they can be there for their mom because, “It’s time for some mayhem. As the swing in like the A- Team (Louis is Mr. T) one of the guys open the door too soon and all the eggs Jessica bought earlier in an attempt to cut off the boys supply, fall out of the van, foiling their plan to fight back. So they “Figure out a way to scare those punks so badly they never want to come back.”

They eventually show up, Reservoir Dogs style, with their eggs in tow and proceed to egg the house. As they do, Eddie’s friend, who is a girl (which are the scariest thing to teenage boys) shows up with her friends and put them in their place. They give them a verbal lashing, and the boys flee. As they do, Jessica grabs an egg and throws it at them, hitting one right in the head.

Jessica is in such a good mood; she joins in the festivities of trick or treating as they all run down the street.