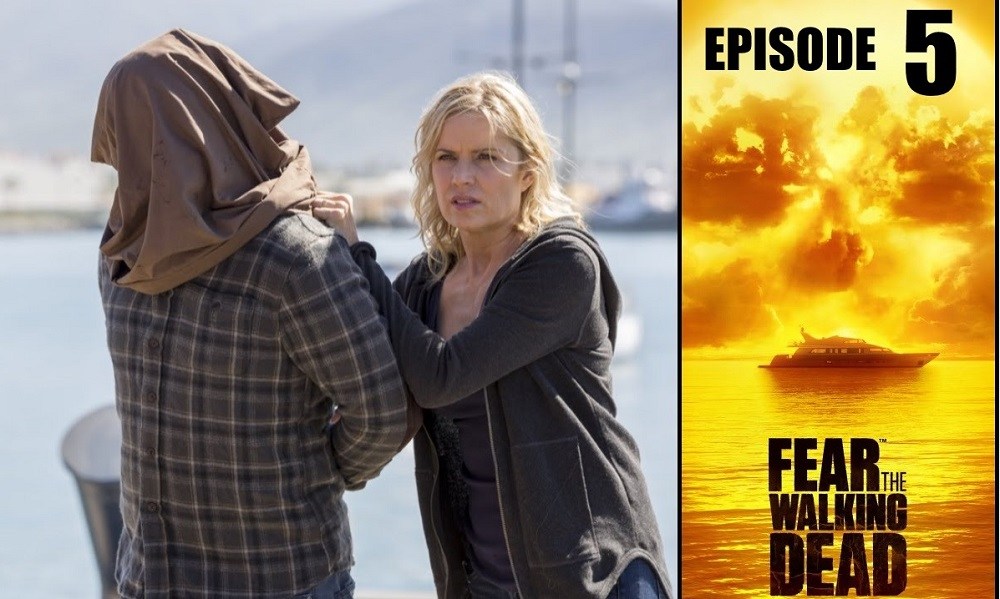 This week “Fear The Walking Dead” had maybe its best episode to date with Captive. Second best if you tally the votes on IMDB.

I’ll go along with that.

There was plenty of action that carried over from last week. And we had a nasty individual to root against in Reed.

The episode started out with Alicia being fed a steak by Conner, which was promply stolen by the Prego Lady. Kinda rude. She is eating for two, though.

Jack looks to be a decent guy who just fell in with a bad bunch. He might eventually make a good BF for Alicia. Or he could die by episode’s end.

It’s been awhile since Daniel got to waterboard anyone. He got his chance this week with Reed, who was in a ton of pain already. No doctor on board to remove the crowbar sticking through his belly. Daniel was ready to make his situation much worse. Turns out not much prodding was needed since the arrogant bastard opened up about Connor being his brother and told how many ships they controlled.

Daniel didn’t get to inflict much pain on the boy but did get off a great line about fearsome men not needing to threaten people with words. Truly scary guys need no words at all.

Luis got a taste of what Victor has been dealing with as Maddie shows her stubborn nature. Victor knows it’s easier to just go along with her. He approves of her plan to rescue Travis and Alicia but doesn’t think it wise to leave the young folks out.

Maddie is hovering over these “kids” like she has control over this world. She couldn’t even save her son from becoming an addict back in the comfortable world that’s long gone.

Travis is in a bad situation in his holding cell. What if his captors just bounced or died? He’d be stuck there to starve. Luckily for him, that wasn’t likely since Alex turns up as part of Conner’s crew. She’s pretty pissed about being stuck on the raft behind the Abigail then cut loose. I know she would put a knife in his throat before she had to flee the scene.

Alex gave Connor the extra info to make it easier to take over the yacht. Here was a solid example showing that it isn’t always the right move to horde all the resources for yourself in this terrible new world.

I’m enjoying the confident guy Nick is becoming. Strand has given him a reason for being. The guy is still hooked on drugs, but his every waking thought isn’t about how to get his next fix.

Daniel did try to give more responsibility to one of the kids. Big mistake.

Leaving Chris to monitor Reed went really bad. This is that kid we see in so many families who could fuck up a wet dream. It was nice to see the smart ass pirate get what he had coming, but it wrecked Maddie’s hostage swap plan.

Chris asks a super dumb question after he hears the adults arguing after he capped Reed. “Did I screw things up?”

Maybe Maddie does need to keep her parental helicopter flying. This guy has no common sense.

Lucky for Chris, Reed finally does turn into a Walker. I have no idea why zombie Reed was untied from the chair. No one saw this coming?

Poor story set up. Why not have Chris cut him loose right after shooting him to make it look like he had no choice? At least that would be a plausible reason for Reed being able to lunge after turning.

Being undead turned out to be a workable hostage deal as Maddie went with the old school burlap sack on the hostage’s head. I’m sure this yacht has drawers full of burlap. Nonetheless, this would keep Connor from realizing his brother had mush for brains until it was too late.

I thought maybe Luis would snipe a bad guy or two during the Travis / Alicia for Zombie Reed trade. But it was left up to Maddie. She made the swap to perfection as she sicced Reed on his brother and crew.

Connor is the big bad no more. Just another Walker now. Dude should have kept his rabid dog of a brother on a tighter leash from the beginning.

Travis caught one of Connor’s men with a vicious headbutt about the time I figured Alicia would stick Jack with the knife she lifted. I guessed wrong. She didn’t stab him in the heart; she just broke it a little as she slid away from him into the sea to join her mom and Travis in the dinghy.

Alicia could have taken Jack with her, but he would have been a tough sell to the hard-asses on the boat. Daniel might have killed him in his sleep. Luis may have drowned him in the shower. Or Victor could have banished him to an inner tube towed behind his ship.

Fear the Walking Dead Episode 5 is history. So what did we learn this week?

– These survivors are capable of taking down a formidable group.

– It’s OK for another female to strike a pregnant woman in an apocalyptic scenario.

– Nick is on his way to being a high-level player in his group. He may eventually be seen as the Carol or Daryl of this spinoff.

– Luis is not very patient. He’s all about moving forward.

– If someone cooks you a steak in a world short on good food…eat fast!