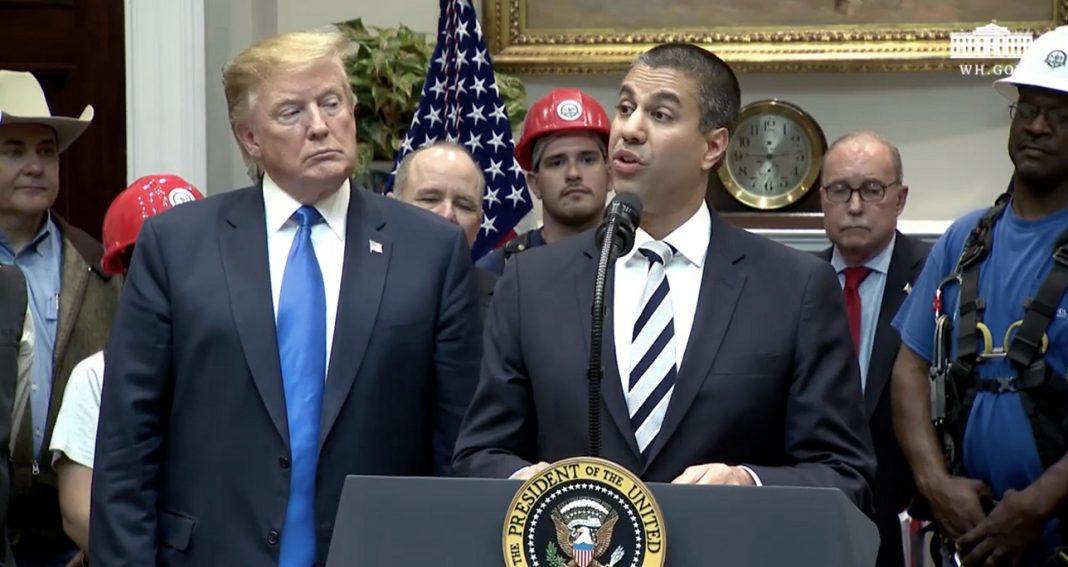 5G is the next big thing in tech, and Donald Trump has decided that the United States is in a must win race to build it. Don’t get too excited though, as it will take years to really happen and forget about it in rural areas.

The U.S. government will hold a massive auction later this year to bolster 5G service, the next generation of mobile networks. President Donald Trump showcased the announcement Friday, declaring that the race to stand up these faster, more powerful networks is a competition “America must win.”

“We cannot allow any other country to outcompete the United States in this powerful industry of the future,” Trump said at the White House. “We are leading by so much in so many different industries of that type, and we just can’t let that happen.”

Trump also announced a $20 billion plan to expand broadband access to rural areas currently without it, a decadelong extension of an existing program.

5G will mean faster wireless speeds and has implications for technologies like self-driving cars and augmented reality. Trump said it will transform the way people work, learn, communicate and travel, making farms more productive, manufacturers more competitive and health care better and more accessible. But experts say it’s hard to know now how much life will actually change because of the much-hyped network upgrade.

It will take years to roll out, and the highest data speeds and capacities may not reach rural areas at all.

The rollout started last week in the U.S. and South Korea but will take years.

The Federal Communications Commission said Friday that it would hold the largest auction in U.S. history to boost wireless companies’ networks. The auction is set for Dec. 10, and will be the agency’s third for 5G, said FCC Chairman Ajit Pai, who joined Trump for the announcement.

“We want Americans to be the first to benefit from this new digital revolution,” Pai said.

The U.S. is jockeying for position with China over 5G. It has effectively banned Chinese telecom equipment maker Huawei from most U.S. networks due to concerns that it might enable Chinese government spying, which Huawei denies. The U.S. has pushed its allies to do the same, with mixed results. Huawei is the world’s largest maker of such equipment.

FCC Commissioner Jessica Rosenworcel, a Democrat, criticized the agency’s approach to 5G Friday. She said the U.S. has not auctioned off “midband” spectrum that is better suited to serve rural areas because of how far it can carry signals, and that the Trump administration’s actions on 5G have “set us back.” She cited tariffs on telecom equipment that have raised costs and said the administration has been “alienating allies” on the 5G security issue.

The FCC also said Friday that it will be renewing an existing $2 billion broadband subsidy program, for 10 years. It will provide about $20.4 billion over a decade to providers, with the goal of connecting up to 4 million rural homes and small businesses to high-speed internet.

The agency spent $34.5 billion on rural-broadband network subsidy programs from 2010 to 2017, according to the Government Accountability Office.

It’s more expensive for telecom companies to serve spread-out rural areas than cities and suburbs, so the government provides grants to encourage them to build internet networks in rural parts of the country. Some 24 million Americans lacked access to high-speed internet as of the end of 2016, by the FCC’s count.

All three social media platforms, including Facebook Messenger, were affected by the outage.

Downdetector.com, a site that monitors site outages, shows Facebook had been down since 6:30 a.m. EST in much of the world, with thousands of reported outages concentrated in the northeastern U.S., Europe and the Philippines.

It appeared to be back up and running for most users by 9 a.m. EST.

A Facebook spokesman declined to give a reason for the outage, but said the issue has since been resolved and the company apologized for any inconvenience.

#FacebookDown, #instagramdown and #whatsappdown were all trending on Twitter globally.