Of course, with any dead body that Supernatural’s Sam and Dean Winchester are investigating, we meet the coroner – in this case, the Deputy Coroner played by Eddie Flake. Although his scene is really short, filming definitely made an impression on Eddie. Here he talks about being on the set and meeting Mark Sheppard (Crowley).

Tell us about your character.

My character is a deputy coroner; someone who deals with the bodies in the morgue; in my scene, there’s a dead body that comes in that the main guys are looking for. He’s a clue to what’s going on in the story. He has his eyes burned out which makes it very horrific. I’m there, and I have to keep an eye on dead bodies coming in and out and these guys they come in as they are FBI or special agents and they come check out the body.

You’ve been in a variety of Vancouver shows over the past year – Supergirl, in addition to Bates Motel and iZombie, to be aired next year – what struck you as different about filming for Supernatural?

I really like … being on the set for Supernatural since they’ve been running for what, 12 years now? Twelve seasons? Just the comfortability of being on set with those guys and everybody on the crew they’ve been doing it for so long it’s like a family there. Everybody that comes on the show they make them like you’re part of the family. It’s an even transition to get on set and be comfortable, and deliver your lines, or be in the moment … there’s no stress or any pressure on you because everybody’s on set and having a great time. I appreciate that, especially it was my first show I booked, and it was my first time being on a professional set like Supernatural. 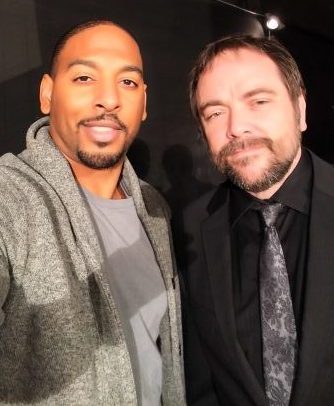 Well, my scene was really quick. I spent most of my time in my trailer, but I got to meet the actor that plays Crowley (Mark Sheppard) and we got to talking, and he got to school me on the acting business, and we talked about football … he’s a big Washington Redskins fan. We talked football, and we took a couple of pictures together … it was my first time meeting him, and he’s a great guy off-camera. He’s a character. He tells it like it is, he’s a funny guy and all those guys – I met everybody and everybody was really chill. Like it’s a job to them, they come, they do their job, and they go home.

I grew up as a really shy kid, and acting is something like therapy for me, it actually gets me out of my shell. I grew up with my grandmother, and I had to grow up real fast … my grandmother worked a lot, so she wasn’t home, but I had to be the man of the house at the time, raising my brother. I didn’t really show emotion; I was brought up really strong, you don’t cry, always fight for everything … acting has opened me up like a book. I have these emotions inside me that I’ve never used before. It made me feel that it’s okay to cry; okay to be angry, to be happy. It opened me up a lot and helped me … some people are like me; I don’t like to show my true feelings about it, and I always hold everything in. At the end you blow up, y’know, so acting helps me release … it’s like going to the gym, right, the gym helps you release all the endorphins and everything. Acting helps me release all these emotions and gets everything off my chest.

And I like storytelling; I like to entertain people. I like for people to live through me, through their spirit, and I like to be relatable to people and acting helps me tell these true stories that people live in this world.

I just booked another role, a Netflix series I can’t name because you have to sign a confidential waiver. I can’t name the show, but I did book another role; I don’t think I start shooting until after the new year. Once I can talk about it, I’ll definitely put it on social media.

I will be shooting a UBC (University of British Columbia) film; last year I shot a UBC film that did really good at the Montreal World Film Festival. They’re bringing me on again – the same people who produced Vanessa, the short film is called Vanessa. They’re doing a short film that’s in the same world as Vanessa. It’s like a Tarantino/action like drama/funny comedy type short film. I’ll be shooting that, and hopefully, I have a project that I wrote, it’s called Saving Rose. I’m hoping that I can get to produce that and shoot that as well.