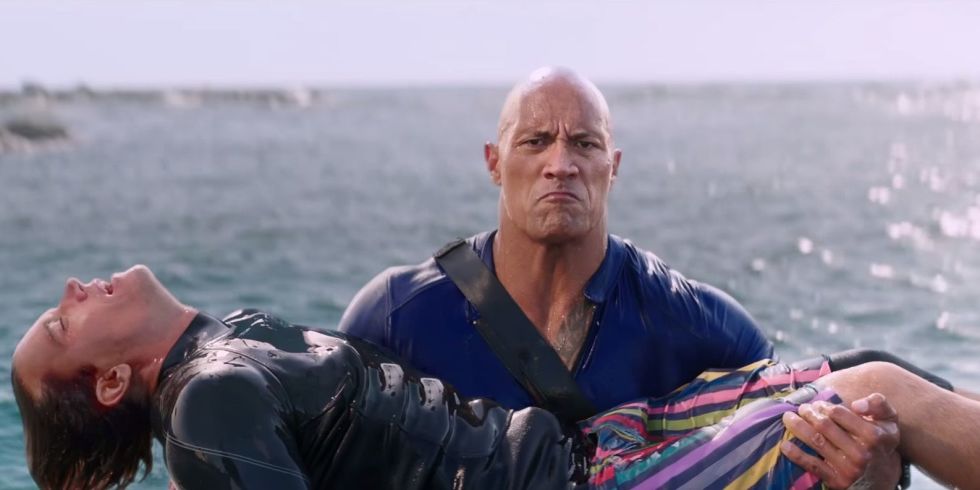 Unfortunately for actors Dwayne “The Rock” Johnson and Zac Efron, as well as the rest of the cast of the recent Baywatch revival movie, critics are not holding anything back when it comes to their notably unfavorable opinion of the new flick. About a week ago, the beach-centric movie was released into theaters and ever since, it has been getting slammed by media outlets around the globe.

An example of one of the countless, scathing reviews that the movie has already received is from established publication The Washington Post, whose movie reviewer wrote, “Johnson being Johnson, he’s still a delight to watch. But there’s only so much a charismatic giant can do when he’s up against a blend of lazy gross-out humor and inane male wish fulfillment weighed down by terrible editing and lame action.”

Early on Thursday morning, one Twitter user tried to put a positive spin on things, pointing out that the movie had risen in ratings on movie ratings site Rotten Tomatoes. The user tweeted, “The new [Baywatch movie] has now ticked up from 13% to an 18% rotten tomato!” In response (and in defense of his latest movie), Dwayne tweeted out, “Yay positive upticks. Fans LOVE the movie. Critics HATE it. What a glaring disconnect. People just want to laugh & have fun.”

At the time that this was written, The Rock’s Baywatch installment was sitting at a mere 19% on Rotten Tomatoes, however, it did have a notably higher audience score, sitting at 70%. Nonetheless, it doesn’t look like the new revival of Baywatch will be winning any major film awards anytime soon – although, that likely wasn’t the movie’s end goal to begin with. Sadly, those fans didn’t show up to give it a better run at the box office.

Johnson wasn’t able to save Baywatch from bombing at the weekend box office though. He put in a great fight for his film, but it just shows that big names can’t save bad movies. 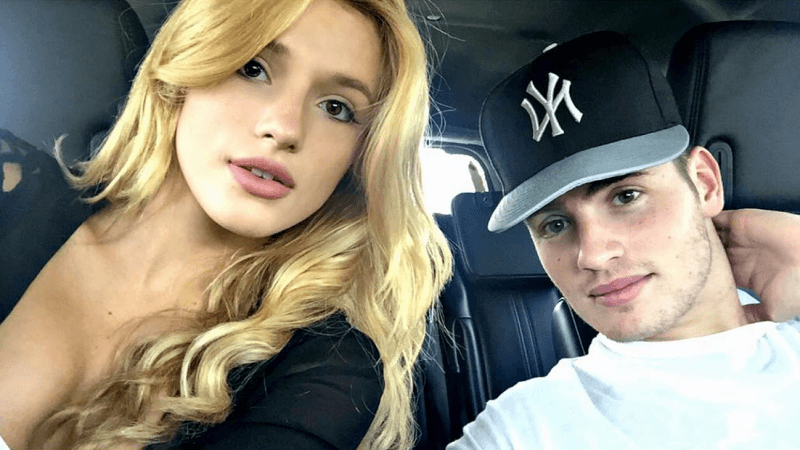 Well, that was quick.

Over before it even started, it appears that former Disney starlet Bella Thorne’s romance with troubled reality star Scott Disick was extremely short-lived. As reported previously, the two were spotted hanging out just over a week ago at a club in West Hollywood. Fast forward a few days, and the stars were seen jetting off together to spend some alone time in Cannes.

While it was only a day or so ago that pictures were taken of Scott and Bella cuddling up with each other in Cannes, Bella just recently took to her Twitter to insist that things are over between her and the Keeping Up with the Kardashians star. On Thursday, the Famous in Love actress took to her Twitter to express her current mood while in Cannes, saying, “Yo this [Cannes] fancy life isn’t for me.” Shortly after, a follower tweeted at the star, asking for an update on her fling with Scott, in which Bella bluntly replied, “Hahahahah I’m not talking to Scott or anyone else.” Minutes later she tweeted out that there is “legit nothing” going on between them.

Unsurprisingly, Scott has already moved on to his next beau. The father of 3 was photographed with his former flame Chloe Bartoli, who you may recall was part of the reason that Kourtney called it quits with Scott back in July of 2015 (Scott was seen cuddling up to Chloe while he was still in a committed relationship with Kourtney).

While Scott is unable to maintain a stable relationship these days, his ex-Kourtney Kardashian is quite the opposite. In fact, Kourtney has been spending the past few days having fun with her new beau, model Younes Bendjima. 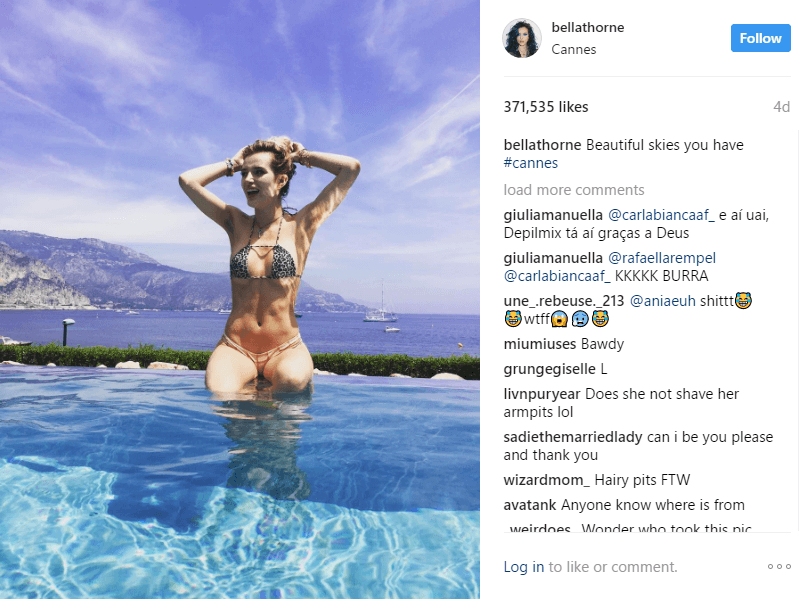 Bella has already gone back to someone closer her age like ex-boyfriend Gregg Sulkin as she celebrated his birthday with a revealing Instagram post. They dated for more than a year before splitting up, and now it’s looking like they’ve found their way back again.

“After much thought and soul-searching, we have made the difficult decision to end our relationship,” they said in a joint statement at the time. “We will always love each other and have a deep respect for one another, as we have each grown to be better people because of our time together.”

Once Disick was spotted with ex-girlfriend Chloe Bartoli, then British model Ella Ross and her friend Maggie Petrova, then Sofia Richie, that signaled the end of that fleeting romance.

“Bye Cannes, you were boring,” she said on Snapchat.

The former Disney Channel star, 19, is back to canoodling with Sulkin after returning from the Cannes Film Festival, where the actress got frisky with Scott Disick.

Thorne shared a photo of her laying on top of the shirtless 25-year-old actor on a pool float wearing the same outfit she had (which was featured on her Snapchat) worn earlier on Sunday. 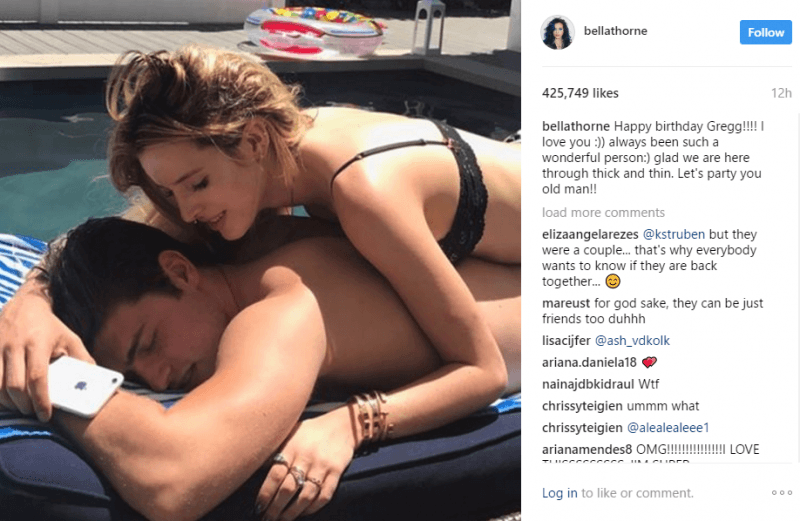 “Happy birthday Gregg!!!! I love you,” she captioned the image. “Always been such a wonderful person:) glad we are here through thick and thin. Let’s party you old man!!”

The actress also shared a video of balloons that spelled out “Happy Birthday G-Eazy” on her Snapchat on Sunday.

Now it looks like she’s got something to put that smile back on her face.

Miley Cyrus has her say, why Liam Hemsworth divorced so fast, Kodak Black

Jake Gyllenhaal opens up about Heath Ledger and ‘Brokeback Mountain’