With two games worth of fantasy data, week three has to be easier right? Time will tell, but it does help to have more game minutes under our collective belts so we can start to rely on steady studs instead of leaning on educated guesses.

So without further rambling, here is the perfect NFL lineup on DraftKings for week two, courtesy of Fantasysportsco.com 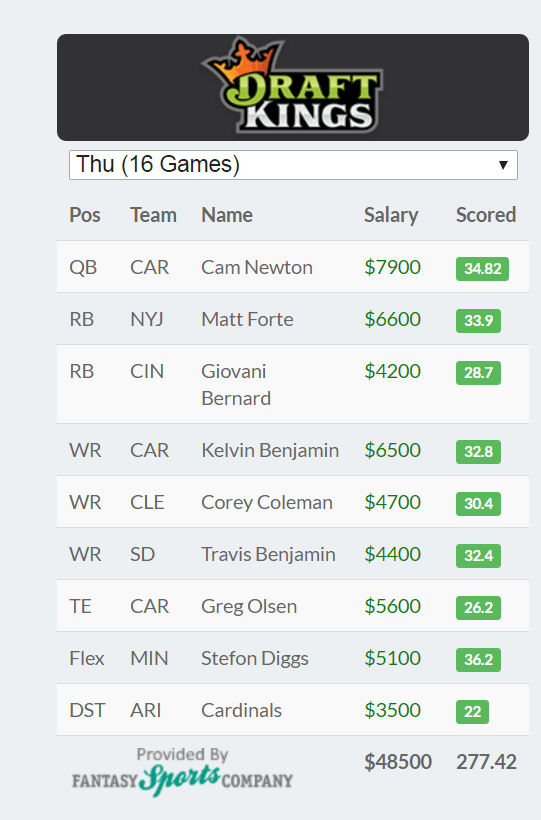 Keep in mind that past performance is not necessarily an indicator of future results. Now I sound like a shady stock broker.

Even though we can’t be certain with any of our picks going forward, these perfect lineups do show some trends. Even without having one single player make the perfect lineup in both weeks one and two.

One trend is the quarterback stacked with two of his receivers. Last week it was Brees with two Saints wideouts. This week Cam Newton stacked with Kelvin Benjamin and tight end Greg Olsen, put a few contestants in the winner’s circle.

Another trend that may be helpful is the high priced defenses used in the first two games of 2016. Both perfect lineups have used defense / special teams above the $3000 mark.

In week three there will be eleven defenses at $3000 and above.

Biggest Game Check – Cam Newton at $7900 was a steal. And guess what. Carolina’s quarterback is $100 less this upcoming week versus Minnesota. The Vikings will be a tougher matchup than the Niners, but Carolina and Cam will put up big points as long as they are not facing Denver.

Space Maker – Giovani Bernard would have been a roll of the dice, but wound up a great pick for a lucky few. His career-best nine receptions made him a real value in DK’s PPR format. And his single touchdown as a receiver was one better than all of 2015.

Stacks on Stacks – Newsflash….Cam likes Greg Olsen. And Kelvin Benjamin is back with a vengeance. This Panthers offense could end up being even more fantasy potent than they were last year. Benjamin was only $6500, and the tight end was even lower at $5600. Both no-brainers.

Lucky Pick – Corey Coleman is on a really bad team. He only scored 8.9 fantasy points in week one. But he got comfortable with Josh McCown really quickly and wound up an incredible value at just $4700, which was discounted by $400 from opening weekend. Every expert is jumping on the bandwagon now, but only the lucky and super smart had Coleman on their radar prior to week two.

Defense wins $$ – Arizona murdered a Tampa offense that looked like real fantasy gangsters versus the Falcons in week one. Get 22 points from your fantasy defense and your bankroll should be on the uptick.

Sure Thing plus a Value Pick – Travis Benjamin was both a sure thing and a value pick. Somebody had to take up the receiving slack left by Keenan Allen when he went down in week one. Benjamin scored two touchdowns and grabbed all six of his targets on Sunday. You might want to pay attention to this kid as he is still underpriced at $5200 for next week versus a porous Indy defense.

Don’t try and use the same players from this week’s lineup. Instead, you should set week three’s lineups in accordance to patterns.

Bonus Tip: It’s no accident that the two QBs who have faced the Raiders this year are among the top five DraftKings quarterbacks going into week three.