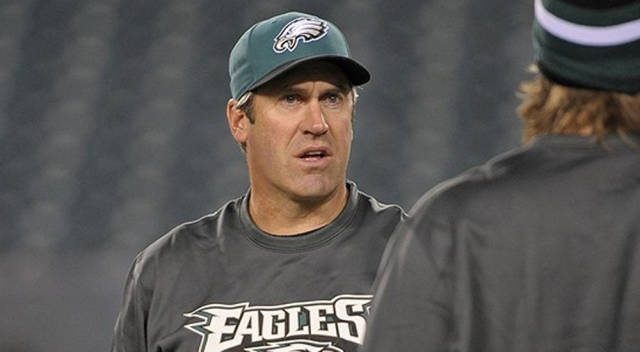 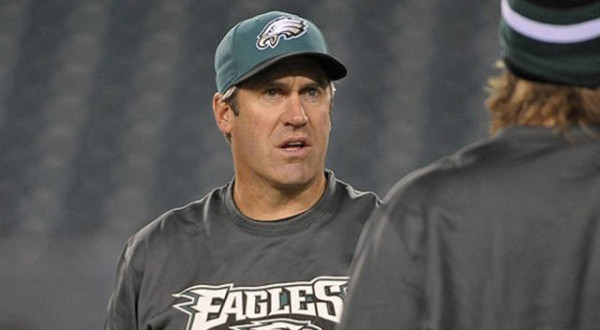 Now that Chip Kelly has been hired as the new coach for the San Francisco 49ers, Doug Pederson has been brought in the fix the Philadelphia Eagles which is a pretty tall order.

Pederson, the offensive coordinator for the Kansas City Chiefs, has accepted an offer to become Philadelphia’s coach, a person with knowledge of the decision told media outlets on Thursday night. The person spoke on condition of anonymity Thursday because the Eagles have not officially announced the hiring.

Pederson, who didn’t interview with any other teams, can’t be officially hired while the Chiefs are in the playoffs. Kansas City plays at New England on Saturday.

Pederson isn’t a popular choice in a football-crazed town that hasn’t celebrated an NFL championship since 1960. Fans were hoping for a big-name coach (Tom Coughlin) or a hot, young coordinator (Adam Gase) to replace Chip Kelly, who was fired five days before the season ended.

Instead, owner Jeffrey Lurie and his staff went for someone quite familiar to the organization. Pederson started his first NFL game with the Eagles and got his first NFL assistant coaching job in Philadelphia.

Tom Coughlin interviewed for the job, but it didn’t seem the 69-year-old two-time Super Bowl champion would fit in here.

Pederson started nine games at quarterback for the Eagles in 1999, grooming Donovan McNabb to take over the job for Andy Reid‘s team. He returned to Philly a decade later to work for Reid. Pederson followed Reid to Kansas City in 2013 and was promoted to offensive coordinator. The Chiefs haven’t ranked higher than 21st under Pederson.

Philadelphia also interviewed Gase, who was hired by Miami; Ben McAdoo, who was hired by the New York Giants; and two of the Eagles’ assistant coaches during the 2015 season under Kelly: Pat Shurmur and Duce Staley.

Kelly was fired after the 15th game of this season when the Eagles were 6-9. They went 10-6 in each of his first two seasons in charge, making the playoffs in 2013.

The 47-year-old Pederson was the fifth candidate to interview with the Eagles. He met with the team in Kansas City last Sunday morning after the Chiefs beat Houston 30-0 to advance to the second round.

“I have a lot of respect for the organization and what they’re doing there,” Pederson said Wednesday.

Pederson didn’t have much playcalling responsibilities in Kansas City because Reid prefers to call his own plays. But Reid acknowledged earlier this season that Pederson has started to share more of that burden.

“One, he’s relatable. Two, the guy is brilliant regarding an offensive mind,” Kelce said. “I’m not sure how much better they get. He understands defenses, what they present. He understands strategy and things like that. But he’s a relatable guy. Guys want to play for him.”

Pederson played 10 NFL seasons almost exclusively as a backup quarterback. He was with Miami, Green Bay, Philadelphia and Cleveland. He was 2-7 as a starter for the Eagles. The following year with Cleveland, he went 1-7 as a starter.

Those were his only NFL starts.

He has been credited with helping Alex Smith‘s steady improvement in Kansas City.

We’ll find out today if this source turns out to be accurate or not as the Eagles will surely respond for end of the week news.