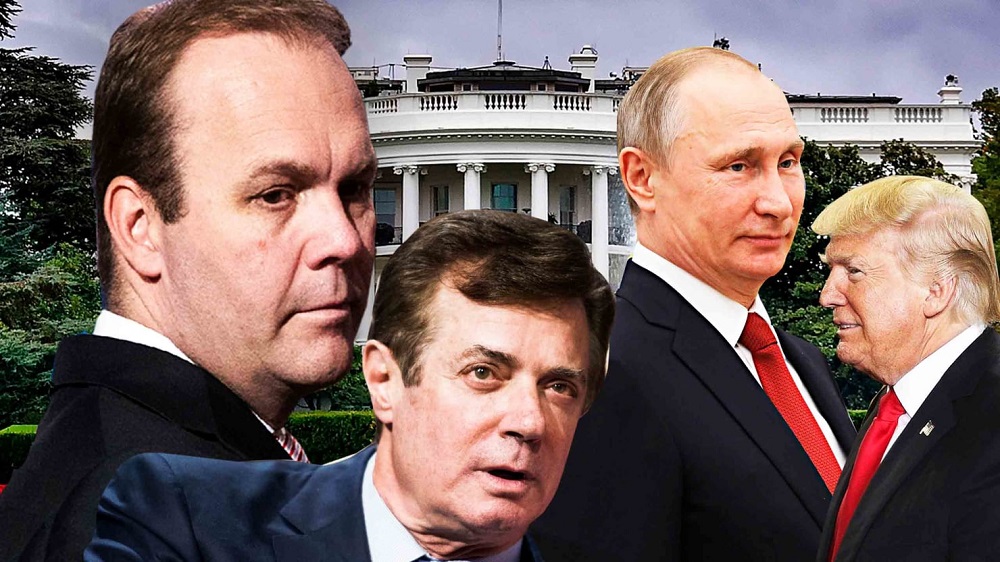 The filing adds allegations of tax evasion and bank fraud and significantly increases the legal jeopardy facing Paul Manafort, who managed Trump’s campaign for several months in 2016, and longtime associate Rick Gates. Both had already faced the prospect of at least a decade in prison if convicted at trial.

The two men were initially charged in a 12-count indictment in October that accused them of a multimillion-dollar money-laundering conspiracy tied to lobbying work for a Russia-friendly Ukrainian political party. Manafort and Gates, who also worked on Trump’s campaign, both pleaded not guilty after that indictment.

The new charges, contained in a 32-count indictment returned by a federal grand jury in Virginia, allege that Manafort and Gates doctored financial documents, lied to tax preparers and defrauded banks — using money they cycled through offshore accounts to spend lavishly, including on real estate, interior decorating and other luxury goods.

The new criminal case, assigned to U.S. District Judge T.S. Ellis III, comes a week after a separate Mueller indictment charged 13 Russians and three companies in a conspiracy to undermine the 2016 U.S. presidential election through a hidden social media propaganda effort. The charges against Manafort and Gates don’t relate to any allegations of misconduct related to Trump’s campaign, though Mueller is continuing to investigate potential ties to the Kremlin.

Manafort spokesman Jason Maloni said in a statement that the former Trump campaign chairman is innocent and stressed that the charges “have nothing to do with Russia and 2016 election interference/collusion.”

Manafort “is confident that he will be acquitted of all charges,” Maloni said.

The charges against Manafort and Gates arise from their foreign lobbying and efforts that prosecutors say they made to conceal their income by disguising it as loans from offshore companies. More recently, after their Ukrainian work dwindled, the indictment also accuses them of fraudulently obtaining more than $20 million in loans from financial institutions.

The new indictment increases the amount of money Manafort, with the assistance of Gates, is accused of laundering to $30 million. It also charges Manafort and Gates with filing false tax returns from 2010 through 2014 and in most of those years concealing their foreign bank accounts from the IRS.

The indictment contains references to other conspirators who are accused of helping Manafort and Gates in obtaining fraudulent loans. It doesn’t name the conspirators but notes that one of them worked at one of the lenders.

In a document that accompanied the new indictment, prosecutors said they had filed the charges in Virginia, rather than Washington where the other case is pending, because the alleged conduct occurred there and one of the defendants objected to them being brought in Washington. It did not say which defendant objected.

The indictment comes amid ongoing turmoil in the Manafort and Gates defense camps. Manafort has been unable to reach an agreement with prosecutors over the terms of his bail and remains under house arrest, while Gates’ lawyers withdrew from the case after acknowledging “irreconcilable differences” with their client. A new lawyer, Thomas Green, entered an appearance Thursday on Gates’ behalf.

Green confirmed to media outlets on Thursday evening that he represented Gates but did not immediately respond to a request for comment on the new charges.

Mueller was appointed in May to investigate potential coordination between Russia and the Trump campaign. He took over an ongoing FBI investigation into Manafort’s foreign lobbying work.

After a two-month stretch that produced no charges, the new indictment is part of a flurry of activity for Mueller’s team within the past week.

Besides the charges against the Russians, Mueller’s team on Tuesday unsealed a guilty plea from a Dutch lawyer who admitted he lied to investigators about his contacts with Gates.

Two other people who aided Trump in the campaign or in the White House — former national security adviser Michael Flynn and former campaign foreign policy adviser George Papadopoulos — have pleaded guilty to lying to the FBI about their foreign contacts. Neither man has been sentenced. Both are cooperating with the investigation.

Mueller is also examining whether Trump obstructed justice through actions including the firing last May of FBI Director James Comey. His team has expressed interest in interviewing the president.

Twitter feels Donald Trump above law plus their TOS