Allison Janney is that actress you feel comfortable knowing that whatever movie or television show she’s in, it’s going to have an edge.

She claims that she’s always been a later bloomer (“I didn’t lose my virginity until I was 21,” she says with a laugh.) By her own estimation, her career didn’t really take off until 1999, when, at nearly age 40, she co-starred in the film American Beauty and on TV as C.J. Cregg in The West Wing — a role that got her six Emmy nominations and four wins. This appears to be the case with her first Oscar nomination too.

Part of her late start may have been due to casting directors’ not knowing what to do with her. “I was a hard fit at a young age. I didn’t make sense as an ingénue or a leading love-interest lady. I just didn’t fit anywhere!” And part of it may have been a fear of failure. “I got a call from a casting director, and I never called her back. Why did I do that? I think I was afraid to admit I wanted to be an actor.”

Since the world devoured Allison Janney’s brilliantly acidic performance as Tonya Harding’s abusive mother in “I, Tonya,” she has won nearly every major award she’s been up for, including a BAFTA, a Screen Actors Guild award, a Golden Globe and a Critics’ Choice prize.

Perhaps the only surprising fact is that this is the first Oscar nomination ever for the 58-year-old actress, who has seven Emmy and Screen Actors Guild Awards to her name (and two Tony nominations). Though she has been in Oscar-winning movies such as “Juno” and “The Help,” the attention for those films did not revolve around her.

“I kind of thought maybe this moment had eluded me in my career, that I just wasn’t getting the kind of roles in films that were giving me, getting me recognition,” Janney reflected recently at the Oscars nominees’ luncheon.

And it’s all thanks to her longtime friend, screenwriter Steven Rogers, who had the idea to seek out the life rights to Tonya Harding’s story. He had two demands for whoever was going to help get the movie made: First, no one was allowed to rewrite him. Second, Janney was to play LaVona Golden. He’d known Janney for decades, since he met her at New York’s Neighborhood Playhouse School of the Theater when he was only 17 (she’s just a few years older than him), and had written parts for her before. But it hadn’t worked out yet.

“I said, ‘I want it in writing or it’s a deal breaker.’ I said it before she had even read the script or even said she would do it,” Rogers said. “But I knew. I was like, ‘This time I’m finally going to get her.’”

It might not seem like the most flattering thing to have your good friend think of you as the chain-smoking, bitter, abusive and overall controversial matriarch to the most infamous figure skater in history, who tells her young daughter to “skate wet” after she pees her pants on the ice, and regularly hits her. But Janney was thrilled.

“I’ve played a lot of mothers in my life,” Janney, who stars as a recovering alcoholic on the CBS sitcom “Mom,” said late last year. “But never anyone to the degree that this one was messed up.”

Rogers, who used accounts of Tonya Harding and her ex-husband Jeff Gillooly to inform the screenplay and story, never actually met LaVona Golden while he was writing the script. Harding told him that she didn’t know if her mother was dead or alive (she is alive and continues to deny abuse allegations). 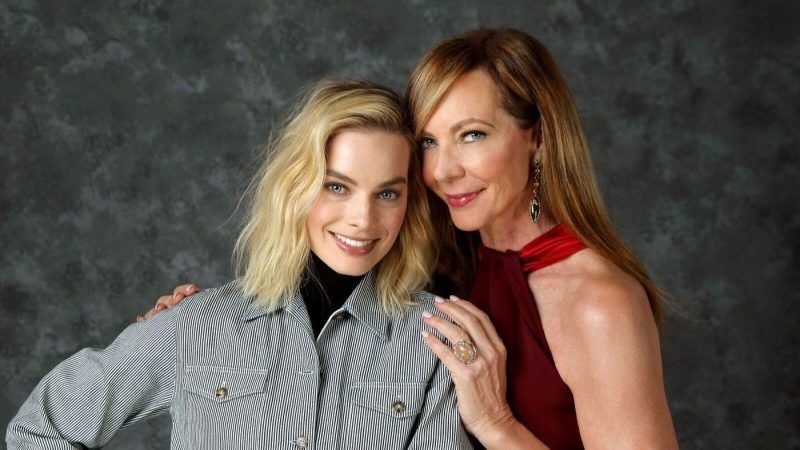 Thus the character in “I, Tonya” is based on an amalgamation of interviews, documentary footage from 1986 (in which LaVona conducts her interview with a bird on her shoulder), stories from Harding and Gillooly and some artistic license.

“It’s a pretty hard character, and I hope the reason he wanted me to play her was because I would try my hardest … to find her humanity,” Janney said. “A lot of that was written in what Steven wrote in the direct address to the camera. That gave me a lot of clues as to who she was. She’s a woman who gave her whole life to her daughter. Every penny she made went to her daughter’s skating. She sees herself as a woman who tried her hardest to give her daughter a better life than she had. Those scenes helped me find her humanity, helped me find what made her a human being, not just an on the page monster.”

For Janney, the experience of disappearing behind this woman who never smiles and never apologizes was liberating. And she found the nuance behind the steely exterior.

“My heart broke a little for her watching all these interviews because I could see under her denial, the hurt that’s there,” Janney said. When someone says ‘I don’t care, I could care less that we don’t talk on the phone,’ it’s like, ‘of course you do.’”

She even enjoyed the test of acting while trying to ignore the bird perched on her shoulder for the scenes where she’s talking directly to the camera, in what she describes as the “Defending Your Life” sequence.

“It’s like the bird heard me and said, ‘Oh yeah?’ Let’s see if you can ignore me when I’m putting my head in your ear,’” Janney said. “I thought this is exactly the kind of humor that is perfect for this movie. I kind of loved it; as much as it was irritating me, it was also fueling me as I was trying to get my side of the story across.”

Janney was distraught about not being able to have met her subject. She had a laundry list of questions she would have wanted to ask. What kind of upbringing did she have? What were her mother and father like? What happened with each of her four husbands? And, perhaps most importantly: What did she want to do when she was growing up? Did she have her own dreams?

“That would have been great to know,” Janney said last year. So she used Rogers’ script as her guide, and so far it has served her well on the road to the Oscars.

No matter what happens at the Academy Awards on March 4, where she’s up against Laurie Metcalf (“Lady Bird”), Lesley Manville (“Phantom Thread”), Octavia Spencer (“The Shape of Water”) and Mary J. Blige (“Mudbound”), Janney is just hopeful for what this might mean for her future in film.

She said she is “grateful” for this moment.

“Maybe this will break open my personal ceiling in the film world, that I might get more kinds of roles like these: interesting, challenging, important roles,” Janney said.